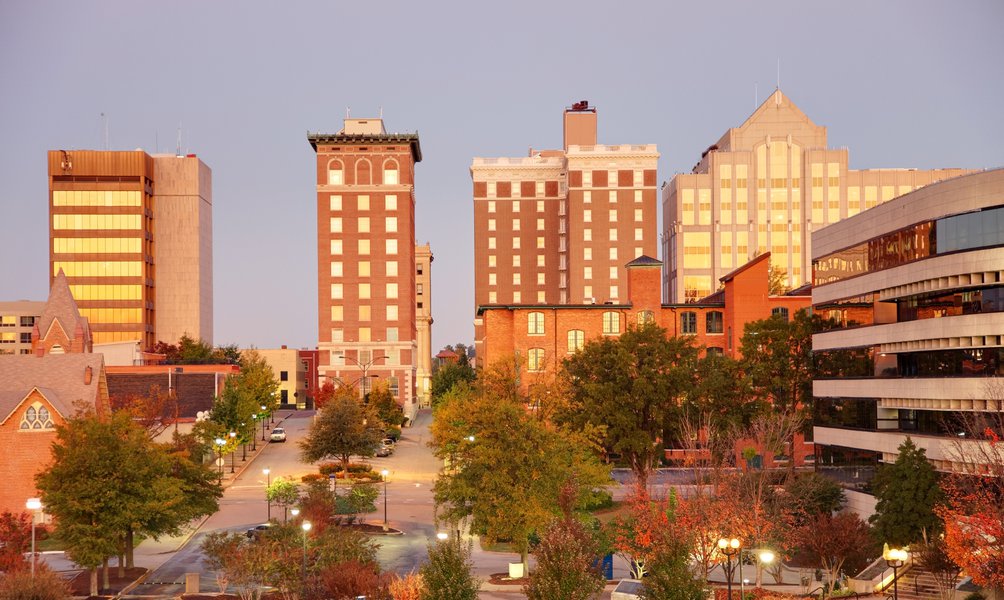 Note: Our market forecast includes Greenville, SC, data as well as data from its surroundings, including Anderson and Mauldin.

Greenville has undergone a dramatic revitalization over the years. Until about two decades ago, the former textile town had deteriorated to the point where vacant storefronts were commonplace along the downtown area, while overgrown weeds and an overpass hid what has become its feature attraction.

However, today, downtown Greenville is a vibrant area with small businesses filling up its storefronts. Meanwhile, Falls Park on the Reedy has become the centerpiece of the town.

Driving the city’s rebirth has been an influx of major manufacturers to the region, drawn by its business-friendly climate, low-cost workforce, and central location between booming Sun Belt cities Charlotte and Atlanta. Those jobs are drawing people to migrate to the Greenville area in droves. That population growth has enhanced the region’s appeal to real estate investors.

With that backdrop, here’s a closer look at the local Greenville, South Carolina, real estate market.

Located right on the edge of the Blue Ridge Mountains, Greenville is one of the largest cities in South Carolina. Founded in 1831, Greenville became the “Textile Center of the South” as cotton mills took advantage of its fast-flowing waterways and cheap labor force. However, the industry started to decline by the 1960s due to the rise of synthetic fibers produced elsewhere. It began facing additional pressure in the 1970s from developing countries where workers were even cheaper. By the late 1990s, the industry’s collapse accelerated, deepening Greenville’s decline.

However, the region has remade itself over the last two decades by diversifying its manufacturing base. It’s now the home to the North American headquarters of Michelin, the world’s largest tire maker. Meanwhile, BMW operates its largest car manufacturing plant by volume in the region. As these and other manufacturers have moved into the Greenville region with a host of other businesses, they’ve brought jobs. That’s drawn job seekers to the area, helping grow its population base by 60% more than the national average since 2010.

Despite that significant population growth, Greenville remains a relatively affordable housing market. When combined with everything else the region offers, affordability and jobs should drive continued migration to the city in the coming years. That makes it an ideal location for real estate investors to consider.

The Greenville real estate market remained strong in 2020 despite the impact of the pandemic. That’s due in part to the state government’s decision to quickly reopen its economy following the initial shutdowns to slow the spread. On top of that, demand for cars and auto parts, among the key products made in Greenville manufacturing facilities, grew stronger during the pandemic as car sales surged because people opted to drive themselves rather than take public transportation.

Because of that, the city continued to benefit from in-migration by jobseekers. Meanwhile, its overall affordability led remote workers to flock to the city. Greenville has become known as a “Zoom (NASDAQ: ZM) Town,” as more than 3,000 remote workers have moved to the city to take advantage of its affordability, nice weather, and access to outdoor activities.

The unemployment rate in Greenville was 4.6% in March of 2021. While that was 1.9% above the year-ago level, it’s well below the national average of 6%.

Greenville has benefitted from having a diversified economy. In addition to being a large manufacturing hub, the city also has strong employment bases in the healthcare, distribution/logistics, and technology sectors. Many companies in those industries benefited from the pandemic, helping keep Greenville’s unemployment rate below the national average.

The housing market is tight

Greenville’s housing inventory is low at just 1.8 months of supply, down by 1.54 months over the past year. A combination of steady employment, affordability, and reluctance to move due to the pandemic has kept people in their homes. Meanwhile, in-migration to the city has continued. Job seekers and remote workers are flocking to the region due to its abundance of jobs and overall affordability. With limited available supply, home builders are ramping their output to help keep up with demand.

Greenville’s rental vacancies are slightly above the national average, while rental rates are well below the national average. Because of that, rental rates are only up by 5% over the past year, compared to a nearly 10% increase in the median home price. Meanwhile, developers continue building new capacity as multifamily building permits have outpaced the forecast for much of the past year. That will likely keep some pressure on occupancy levels and rental growth in the near term.

As noted, the Greenville housing market is strong, evidenced by the following key housing demand indicators.

Greenville’s unemployment rate has been below the national average for several years. However, it spiked during 2020 due to the pandemic’s impact on the economy and entered 2021 nearly 2% above its pre-pandemic level. On a more positive note, Greenville’s economy has recovered faster than the national economy, resulting in an overall lower unemployment rate of 4.6% compared to the 6.2% national average as of February 2021.

The Dallas Cowboys have a vacancy - and just one kicker presently on the roster. And he's a familiar face to Texas Tech fans, as it's Jonathan … END_OF_DOCUMENT_TOKEN_TO_BE_REPLACED