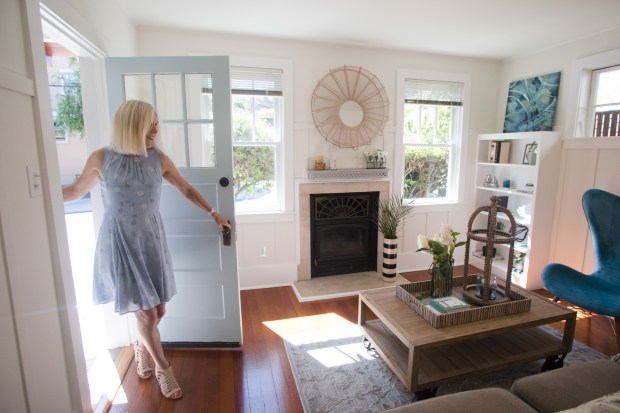 Even in the trench warfare of Marin County home sales, the battle of 116 Blackfield Drive stands apart.

The Tiburon property, a modest 1,305-square-foot home with a single bathroom, was listed at $1.298 million in late March. On the April 1 offer deadline, the property got 18 bids and sold for $2.057 million — or 58% over asking price, said Liz McCarthy, the seller’s agent.

That deal came days after McCarthy sold 129 Pine St. in San Anselmo — a 107-year-old home in the flood zone — for almost 45% over the list price. It had 147 showings and was off the market in seven days.

“There’s such a lack of inventory,” said McCarthy, a 17-year agent who works at the Compass office in Greenbrae. “I don’t believe it’s going to change any time soon.”

The latest data from the Marin County assessor-recorder’s office attest to the continuing market froth, whipped up by extremely low supply and historically low interest rates.

The median is the point at which half the prices are higher and half lower. Sitting right around Marin County’s median is 58 Polhemus Way, a four-bedroom home deep in Larkspur’s Madrone Canyon.

The seller’s agent, James Land of Berkshire Hathaway HomeServices Drysdale Properties, closed the offer period on Thursday and said the property received three bids, all above the asking price.

“It’s never been like this before,” said Land, who is based in San Rafael. “Things are just flying off the shelf. If you can qualify, you’re crazy not to try to get in now. When rates go up, and they will go up, it’ll be a whole different ballgame.”

As for sales volume, the county logged 256 detached home sales in March, up from 162 in February and 146 in March 2020. Seventy-six condos or townhomes sold in March, compared with 71 the prior month and 51 the prior year.

“It’s a competitive market for sure,” said Cathy Youngling, president of the Marin Association of Realtors. “But we are seeing a few more houses listed which we hope will help meet inventory demands.”

Across the nine-county Bay Area, the median price for a detached home was $1,328,440 in April, up nearly 36% from April 2020, the California Association of Realtors reported on Monday. Sales rose 25% over March and 101% over April 2020, the association said.

As of Thursday, the weekly average for a 30-year fixed-rate mortgage was 3%, according to Freddie Mac.

“Not only do skyrocketing home prices threaten already-low homeownership levels and make it harder for those who don’t already have a home to purchase one, it also brings to question the sustainability of this market cycle,” said Jordan Levine, vice president and chief economist of the California Association of Realtors.

“As vaccination rates increase and the state reopens fully, higher home prices will hopefully entice prospective sellers who have held off putting their homes on the market during the pandemic to feel more comfortable listing their homes for sale, which would alleviate pressure on home prices,” Levine said.

McCarthy, the Greenbrae-based agent, foresees no imminent change in market conditions. She said the low interest rates are enticing many Marin homeowners to refinance, thus locking in lower mortgage payments and keeping their homes off the market.

Also, she said, many wealthy buyers around Silicon Valley who have wanted to move to Marin can do so now that telecommuting is more acceptable.

“Marin’s been a relative bargain compared to the South Bay for many years, and we’re catching up,” she said

McCarthy said people assume that real estate agents are reveling in the price boom. What they forget is that agents also represent buyers who are getting crushed, she said.

The Dallas Cowboys have a vacancy - and just one kicker presently on the roster. And he's a familiar face to Texas Tech fans, as it's Jonathan … END_OF_DOCUMENT_TOKEN_TO_BE_REPLACED