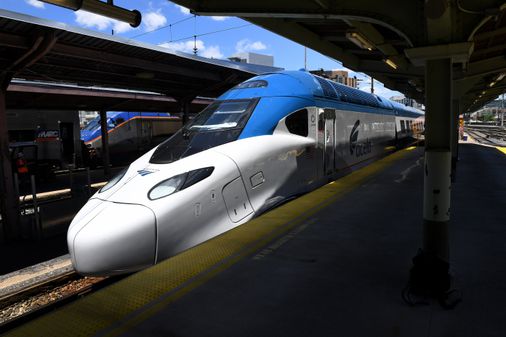 Specifically, we support the vision of the North Atlantic Rail initiative, which aims to provide 100-minute high-speed rail service between New York City and Boston, connecting Long Island, New Haven, Hartford, and Providence along the way. It would use a new tunnel under Long Island Sound, follow an existing alignment to Hartford, new right of way to Providence, and then on to Boston.

This high-speed line would also serve as the spine of a new regional network of fast, frequent, reliable rail services connecting mid-sized cities throughout all six New England states, including Worcester and Springfield, Mass.; Portland, Maine; Concord, Manchester, and Nashua, N.H.; Brattleboro and Burlington, Vt.; and Waterbury, and Danbury, Conn. Early action projects — like East-West rail in Massachusetts and modernization of the New Haven line and Long Island Rail Road — have been identified in each state that can get underway quickly, providing immediate employment opportunities as we recover from COVID-19.

The economic case is strong. For just over $100 billion, or roughly 5 percent of the president’s proposed $2 trillion American Jobs Plan for infrastructure investment, we can create an integrated market for ideas, capital, and talent in a region with more than 10 percent of America’s population, more innovators than anywhere but Silicon Valley, and a $3 trillion economy — larger than that of all but five countries.

The equity case is also strong. The region includes the booming (pre-pandemic) economies of metro Boston and New York City. But the region also includes dozens of mid-sized cities, with large Black and brown communities, unnecessarily disconnected from those global centers. Regional rail connectivity expands housing and job opportunity throughout the region.

Our cities have a unique set of assets upon which to build a new economy, including proximity to the world’s largest concentration of research universities and teaching hospitals, a highly educated and skilled workforce, and cutting-edge manufacturing companies.

The climate case is especially strong. A fast regional rail system powered by renewable energy would address the existential threat of climate change by cutting congestion on our roads, dramatically reducing air pollution, and accelerating the shift away from fossil fuels.

And it can be done. The proposed North Atlantic Rail network replicates the successful 21st-century high-speed inter-city and regional rail networks already in place in virtually every industrialized country in Europe and Asia. It’s time for us to catch up.

Biden has been one of the most prominent supporters of rail investment in America throughout his career and made infrastructure central to his campaign and transition. Secretary of Transportation Pete Buttigieg strongly advocated for regional high-speed rail as mayor of South Bend, Ind. And he knows well the importance of unlocking the economic potential of America’s small and mid-size cities. The president’s infrastructure plan is ambitious and bold.

But the truth is, the proposed American Jobs Plan doesn’t go far enough when it comes to rail. We cannot afford to simply repair what’s broken or make modest, incremental improvements if we want to usher in the second great rail revolution. For North Atlantic Rail, the tracks in Congress are aligned to make it happen.

Our region has a powerful congressional delegation. Earlier this month, two dozen members of Congress from New York and New England signed onto a letter endorsing the North Atlantic Rail initiative. The letter calls for the authorization of a new multi-state public benefit corporation, North Atlantic Rail Inc., to design and deliver the project, using expedited permitting and innovative procurement, project management, and labor practices to complete this investment on-time and on-budget within a 20-year period.

Reliable, extensive high-speed rail is not a pie-in-the-sky idea. The rest of the world has already done it. For the sake of the economy, equity, and the environment, the time has come for America to step into the 21st century and make regional high-speed rail a reality — especially here in New England and New York as part of the North Atlantic Rail vision.

As fans anxiously awaited the release of the season finale of the Netflix thriller “Stranger Things,” the network went down for a brief period on … END_OF_DOCUMENT_TOKEN_TO_BE_REPLACED

If you know of local business openings or closings, please notify us here.PREVIOUS OPENINGS AND CLOSINGS· Air Products and Chemicals Inc.'s chosen … END_OF_DOCUMENT_TOKEN_TO_BE_REPLACED