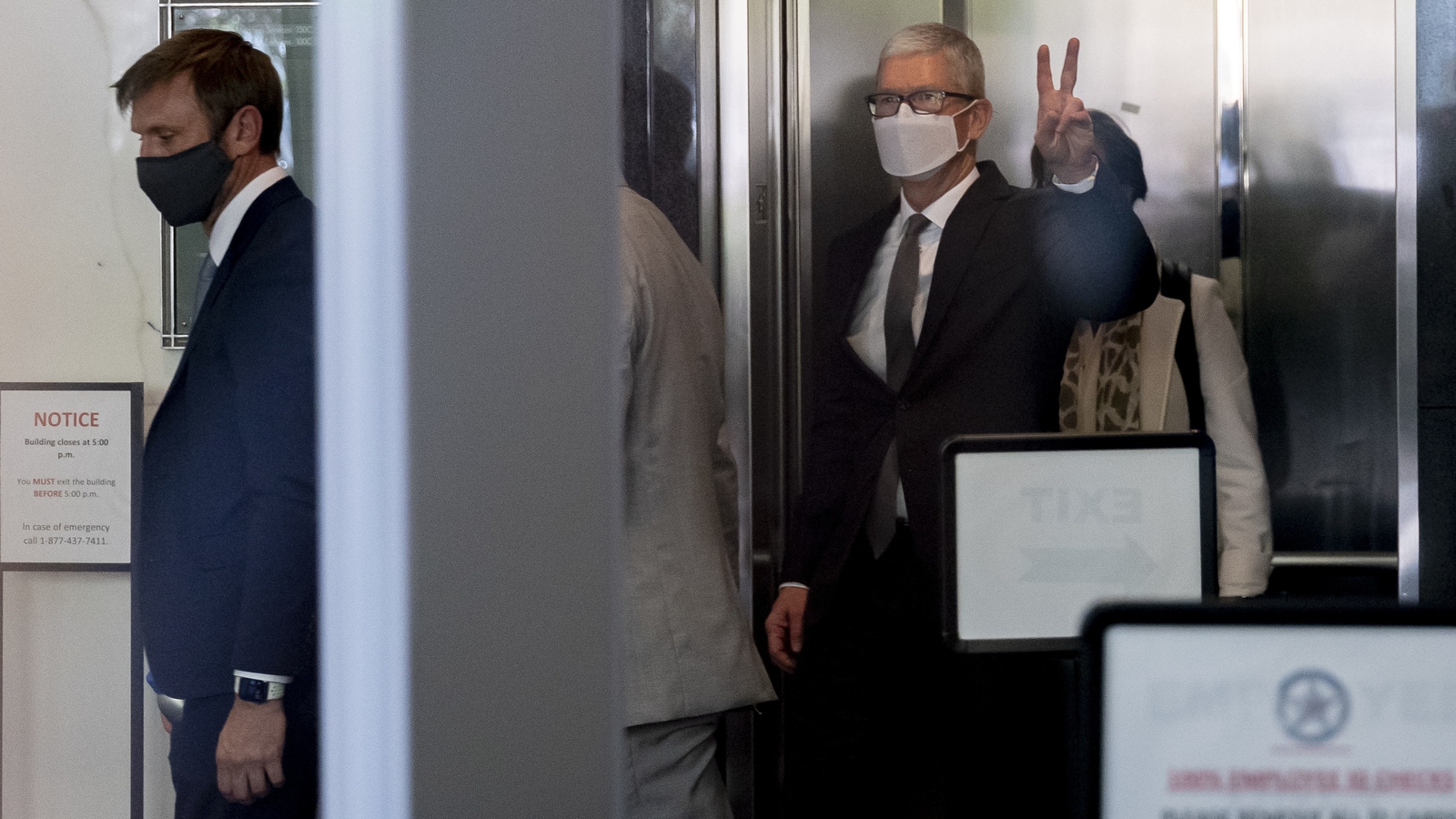 U.S. District Judge Yvonne Gonzalez Rogers needled Cook on why the iPhone maker won’t give users the option to buy lesser-priced virtual goods and content directly from developers — and only allows purchases through Apple’s own App Store, an issue at the heart of the the case.

Legal experts gave Apple the advantage going into the trial, but there was a palpable shift during an intense exchange in the final minutes of Cook’s testimony when the judge voiced skepticism about Apple’s argument that the benefits of its tight controls on how apps are vetted and marketed outweigh Epic’s antitrust claims.

In his first time testifying in a trial, Cook answered questions for more than two hours in federal court in Oakland, California, as the three-week trial in a high-stakes battle between the companies winds toward its close. But even after Cook explained repeatedly that App Store rules and restrictions are aimed at ensuring a safe and secure platform for consumers and developers, the judge wasn’t satisfied.

“What is the problem with allowing users to have choice, especially in the gaming context, to have a cheaper option for content?” Gonzalez Rogers asked.

Cook said that consumers “have a choice today” of buying cheaper Android phones over iPhones.

Gonzalez Rogers pressed Cook further by asking him “what is the problem with Apple” if users wanted an option of paying less outside the App Store to buy V-Bucks, the in-game currency used in Epic’s blockbuster Fortnite game.

Earlier in the week, while listening to expert witnesses, the judge hinted at a possible compromise to resolve the antitrust fight — doing away with Apple rule’s that blocks developers from including a link or other information in their apps to steer users away from the store to buy virtual goods elsewhere online at a discounted rate. She returned to that idea Friday.

If Apple allowed developers to have links in their apps that point to alternative payment systems, “we would in essence give up our total return on our IP,” Cook responded, referring to the company’s proprietary intellectual property.

Gonzalez Rogers didn’t seem convinced and suggested that the App Store “could monetize in a different way.” Gaming apps seem to be making “a disproportionate amount of money relative to the IP you have given them, and everyone else,” she said. “In effect, its almost as if they’re subsidizing everyone else.”

Epic sued in August after Apple pulled Fortnite from the App Store because the developer had created a workaround so it wouldn’t have to continue paying a 30% fee on customers’ in-app purchases. Epic claims App Store policies hurt developers and thwart competition.

Cook, a soft-spoken 60-year-old who has been CEO since 2011, pushed back against Epic’s claims that the App Store juices profits with unfair and self-serving policies.

Cook testified that it would be “terrible” for iPhone and iPad users if the judge ordered the company to allow third-party app marketplaces, in addition to its own App Store, as Epic is demanding.

“It would be a huge convenience issue, but also the fraud issues would go up” because customers would have to enter credit-card information multiple times, Cook said.

An attorney for game maker pressed Cook on his company’s insistence that it doesn’t break out App Store profit separately from other units in the company. One expert witness testified that internal documents obtained from the iPhone maker revealed that the App Store had operating margins of almost 78% in fiscal year 2019. But Cook stood his ground, saying the numbers are inaccurate.

When Apple’s attorney asked whether Cook or Epic’s expert was in a better position to fully understand the context behind the numbers, the CEO said: “I am.”

Under cross-examination by Epic’s attorney, there were multiple occasions when Cook said he didn’t know the answer or couldn’t remember. He was also contradicted by evidence that Epic introduced. In one instance, Epic’s attorney played a clip of Cook’s remarks from a Berkshire Hathaway shareholder meeting in which he said iOS faces competition from Google’s Android right after he testified that the two operating systems don’t compete.

When Gonzalez Rogers was questioning the CEO, she brought up how banks don’t pay Apple a cut for transactions that take place through their apps. “You’re charging the gamers to subsidize Wells Fargo,” she said.

Cook said game makers give Apple a share of their revenue because the company provides a platform for game transactions.

“People are doing lots of things on your platform,” Rogers quipped. “It’s just the choice of a model.”

Cook responded that there are “clearly” other ways to make money from the App Store, but Apple “chose this one.”

“It seems to be lucrative and focused on purchases being made” impulsively by users, Gonzalez Rogers said.

Rogers also pointed to a survey submitted in the case on how some developers are dissatisfied with App Store policies. “It doesn’t seem to me you feel any pressure or competition to address the concerns of the developers,” she said.

“We turn the place upside down for developers,” he said.

OAKLAND, Calif. — Six people were shot on Wednesday at a campus in Oakland that houses four different school programs, prompting lockdowns and … END_OF_DOCUMENT_TOKEN_TO_BE_REPLACED

Beneath all the clamor over Russia's invasion of Ukraine and the efforts to tamp down inflation, investors are largely passing over a huge story in … END_OF_DOCUMENT_TOKEN_TO_BE_REPLACED

If you know of local business openings or closings, please notify us here.PREVIOUS OPENINGS AND CLOSINGS- All-you-can-eat Korean barbecue is on its … END_OF_DOCUMENT_TOKEN_TO_BE_REPLACED