SYDNEY–Australia’s economic recovery accelerated in the first quarter, according to survey of businesses that showed profits, trading conditions and employment all well into expansionary territory.

National Australia Bank’s first-quarter business survey showed that conditions and confidence among firms had strengthened, with both at 17 index points, well above their long-run averages.

“What is particularly welcome is that the improvement is broad-based with conditions and confidence improving in most industries,” he said.

The survey is consistent with other indicators pointing to a rapid recovery in the economy in recent months, led by surging employment growth. Australia has largely contained the Covid-19 virus, allowing a more normal running of the economy to emerge.

The Reserve Bank of Australia said this week it intends to keep interest rates low for another three years at least, allowing time for the economy to absorb spare capacity in the job market, and stir stronger wages growth and inflation.

RBA Gov. Philip Lowe has said he wants to see wages growth rising and inflation sustainably returned to the central bank’s 2-3% target band before there will be any consideration of raising interest rates.

A strong tailwind is also being felt by the resource-rich economy with iron-ore prices recently at their highest level in a decade.

Still, there are headwinds for the economy as the federal government winds back fiscal stimulus including emergence income support measures. The retreat of government payments could trigger a temporary jump in unemployment, economists warn.

NAB’s measure of capacity utilization has returned to around its pre-Covid levels, which is consistent with the bank’s view that the economy has fully recovered from the pandemic-led shock of early 2020.

Write to James Glynn at james.glynn@wsj.com 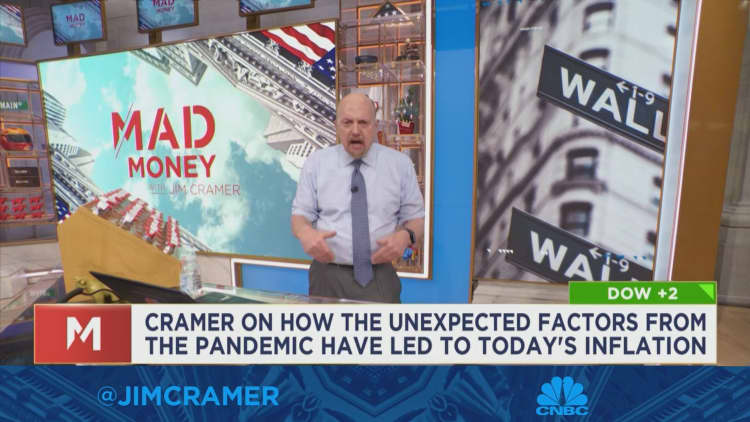 CNBC's Jim Cramer on Wednesday told investors that they should take gloomy economic commentary from bank executives with a grain of salt. "Don't panic … END_OF_DOCUMENT_TOKEN_TO_BE_REPLACED