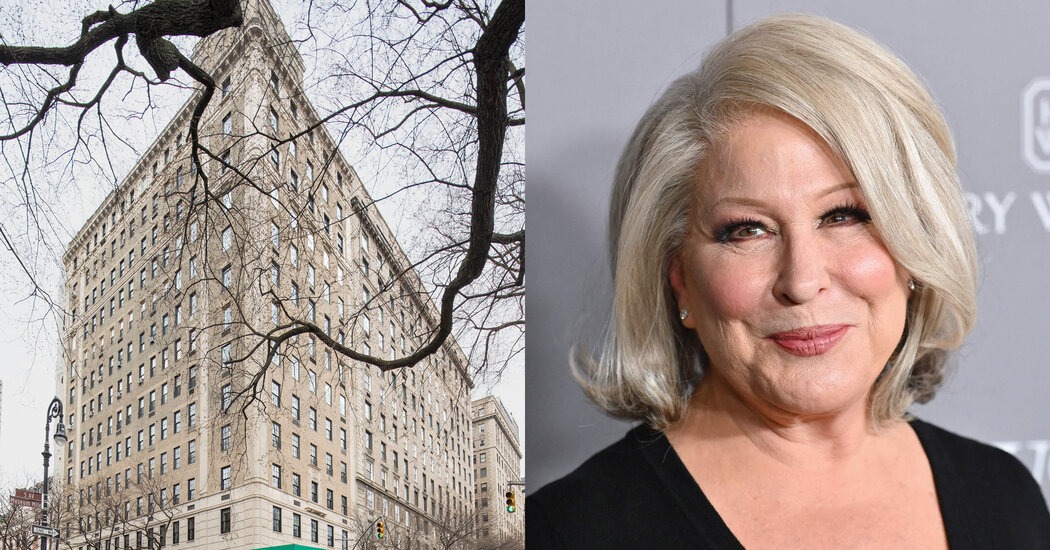 Ms. Midler and her husband, Martin von Haselberg, sold their longtime home, a fully renovated triplex overlooking the Central Park reservoir on the Upper East Side, for $45 million, nearly two years after it was listed. The transaction was the priciest for the city.

Ms. Moore’s home sale took a lot longer. Her refurbished West Village townhouse, which sold for $15 million, and was included in the month’s biggest purchases, had been on and off the market for more than a decade.

Both entertainers’ transactions were part of a busy month in closings, reflecting New York’s continued strong rebound from the pandemic. In the second quarter alone, closed sales surged to their highest quarterly total in six years, according to the latest Douglas Elliman report.

The month’s runner-up sale, at just under $32 million, was a four-bedroom, five-and-a-half-bathroom unit on the entire 86th floor of 157 West 57th Street, a.k.a. One57, in Midtown. The anonymous buyer got somewhat of a bargain: The original sale price in 2015 was $47.4 million.

Other notable July closings included the purchase of one of the penthouses at 15 Hudson Yards, the glass skyscraper that was the first residential building to open in the megaproject. At $22 million, the four-bedroom, five-and-a-half-bathroom duplex was the biggest sale yet in the building, which sits at West 30th Street. The buyer used the limited liability company Hudson Yards Penthouse 88A in the transaction.

In TriBeCa, Isabel Rose, a writer, performer and part of the prominent Rose real estate family, sold her apartment, while John Franco, a former Mets pitcher, and his wife, Rose Franco, bought a brand-new one.

On the Upper East Side, Roger Hertog, the financier and conservative philanthropist, sold his co-op. Gayfryd Steinberg, the wife of Saul Steinberg, a prominent corporate raider, sold her brownstone. Also: The estate of Eric Bentley, the theater critic and playwright who died last year at 103, found a buyer for his Upper West Side apartment.

Ms. Midler’s triplex, atop the brick-and-limestone co-op building at 1125 Fifth Avenue and 94th Street, which sold for $45 million, was initially on the market for $50 million in September 2019. The sprawling apartment had served as home to Ms. Midler and Mr. von Haselberg, a performance artist, since 1996, and it was where they raised their daughter, Sophie.

The penthouse, a combination of two units, has around 7,000 square feet, plus another 3,000 square feet of landscaped gardens that offer sweeping vistas of the park and Midtown skyline. There are four main bedrooms and six and a half bathrooms, as well as a home gym that could be converted into a fifth bedroom. The unit also has three wood-burning fireplaces and a library/music room encompassing the top floor.

The primary bedroom suite contains a large dressing room; a small beauty parlor; two steam rooms; and the gym. One of its two bathrooms features a Japanese hinoki-wood soaking tub.

Ms. Midler, a singer and actor whose numerous awards include three Grammys as well as a Tony for her performance in “Hello Dolly!,” had called the apartment her “country house in the city.” Among her favorite pastimes there was bird watching.

The apartment, under contract since February, was bought through the 1125 Residence Trust.

Ms. Moore’s townhouse at 335 West 11th Street, which sold for $15 million, was first put on the market in 2009 for nearly $12 million, six years after she had bought it for $3.5 million when it was an apartment house. She and her husband, Bart Freundlich, a writer and director, spent about 18 months converting it back to a single-family residence, with help from her brother-in-law, the architect Oliver Freundlich.

The home has been on and off the market a few times over the years; it was sold in an apparent private deal to a buyer using the limited liability company aptly called 335 11th Street.

The five-story, red brick Greek Revival structure, with a classic front stoop, was built in 1839 between Washington and Greenwich Streets. It is currently configured with a primary suite encompassing the third floor, two bedrooms on the fourth floor and a home office and large family room at the top level. Ms. Moore relocated the kitchen from the garden floor to the parlor level above.

The home holds many memories for Ms. Moore and Mr. Freundlich, who lived there with their two children, Caleb and Liv. The couple married in the 49-foot-long rear garden, according to a 2017 profile of the home in Architectural Digest.

Ms. Moore, who has appeared in numerous films, won an Academy Award for best actress in the movie “Still Alice.”

In TriBeCa, Ms. Rose sold her apartment at 90 Franklin Street, at Church Street, a.k.a. the Franklin Tower condominium, for $10 million. She first put it on the market six years ago for $14 million.

The 5,027-square-foot unit has five bedrooms and four and a half bathrooms, a spacious eat-in kitchen, laundry room and a playroom. The primary bedroom suite features an en-suite bathroom, dressing area and a separate den.

Throughout the loftlike home are mahogany floors, 10-foot beamed ceilings and several oversized windows that provide views of the city skyline. The buyers were listed as Scott and Rachel Yedid.

Ms. Rose, an heiress to the Rose Associates real estate fortune (the company builds and manages apartments throughout the city), has an extensive résumé that includes cabaret performer, screenplay writer and novelist (she wrote “The J.A.P. Chronicles”). In 2017, she made headlines by publishing an open letter about her transgender daughter after President Trump rescinded federal protections for transgender students.

Several blocks away, at 111 Murray Street, a glass skyscraper with 64 floors and 157 units, the Francos paid nearly $7.5 million for a 2,934-square-foot sponsor apartment with three bedrooms and three and a half bathrooms. Mr. Franco, who had previously owned an estate on Staten Island, was a relief pitcher from 1984 to 2005, most of that time with the Mets. He was also a four-time All-Star player.

Mr. Hertog got $15.5 million for his 13th-floor co-op at 1040 Fifth Avenue, a 17-floor limestone building, between 85th and 86th Streets, designed by the noted architect Rosario Candela. The apartment house has been home to a host of prominent residents over the years, including Jacqueline Kennedy Onassis.

The apartment has four main bedrooms and five bathrooms, along with staff quarters off the spacious eat-in kitchen and a laundry room. And there are wood-burning fireplaces in the living room and library.

Mr. Hertog, a financier and philanthropist, was also one of the founding partners of the investment firm Sanford C. Bernstein & Company. The buyer used the limited liability company 1040513A in the sale.

Also on the Upper East Side, Ms. Steinberg sold her brownstone at 46 73rd Street, near Central Park between Madison and Park Avenues, for $11.6 million. The buyer was listed as Rosy Path, LLC.

Twenty feet wide and five stories high, the home extends about 8,310 square feet and has a 20-by-20-foot garden in the back. There are five bedrooms and five and a half bathrooms, as well as a finished basement with an additional sleeping area, laundry room, gym and wine storage. The primary suite, which takes up the entire third floor, has two bathrooms and a dressing room.

Mr. Bentley’s estate sold his apartment at 194 Riverside Drive for $4.4 million, nearly a year after his death. The sprawling co-op, which could use a little T.L.C., is one of the last remaining units in the prewar building with the original layout. It contains five bedrooms and three bathrooms.

Mr. Bentley wore many hats during his century-plus lifetime: He was a theater critic, playwright, director, singer and author.

David E. Pozen and Jessica Ulman-Pozen were the buyers.

And in end-of-the-month recorded closings: the real estate developer Ryan Jackson and his wife, Kay Jackson, a stylist, bought a brand-new penthouse at 30 Park Place for $18.4 million. The estate of Anne Marie Aberbach sold her co-op at 812 Park Avenue for $5.3 million; she was the wife of Julian J. Aberbach, who had owned the publishing rights to Elvis Presley’s music.

As fans anxiously awaited the release of the season finale of the Netflix thriller “Stranger Things,” the network went down for a brief period on … END_OF_DOCUMENT_TOKEN_TO_BE_REPLACED

If you know of local business openings or closings, please notify us here.PREVIOUS OPENINGS AND CLOSINGS· Air Products and Chemicals Inc.'s chosen … END_OF_DOCUMENT_TOKEN_TO_BE_REPLACED