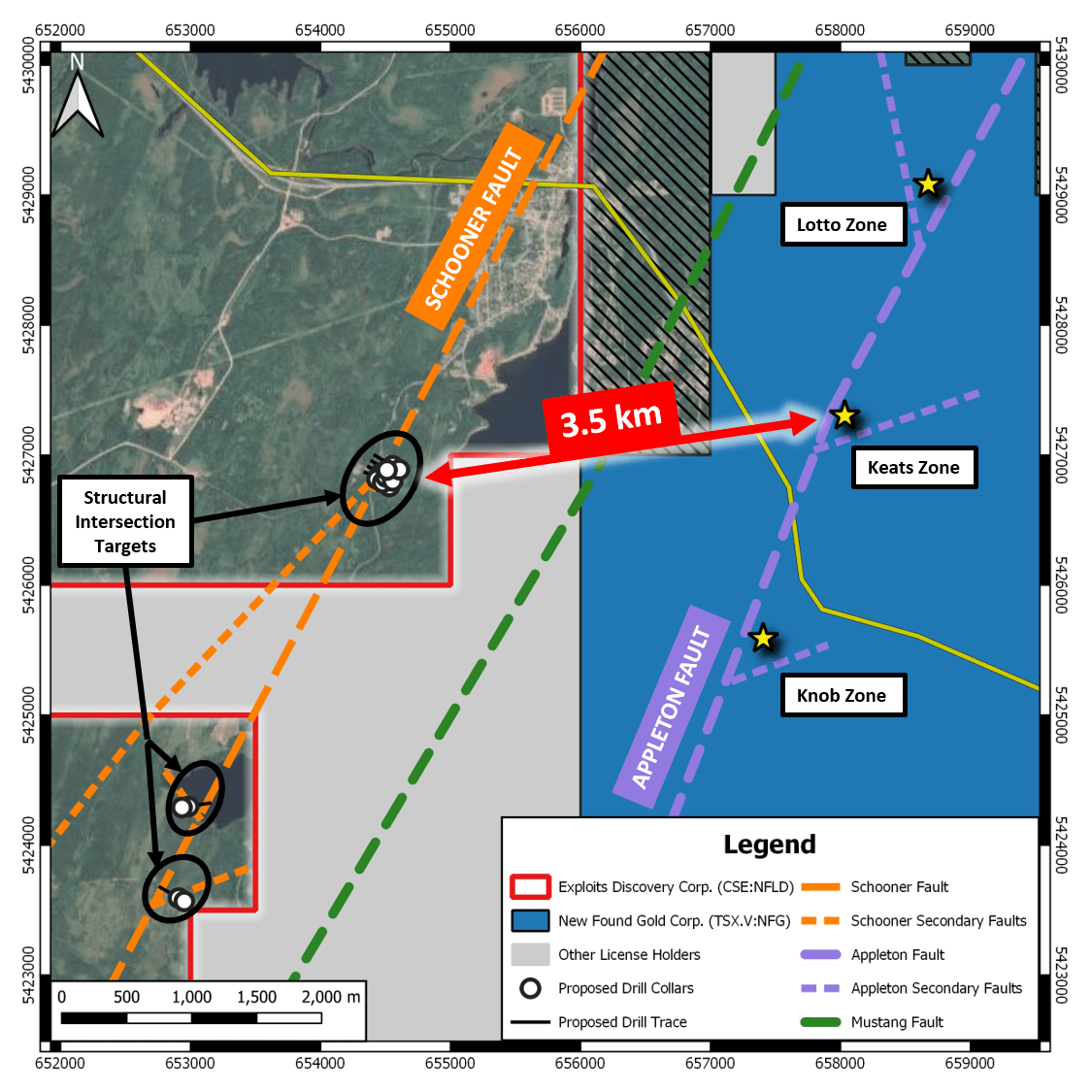 Exploits Discovery Corp. (OTCQB: NFLDF) (CSE: NFLD) (FSE: 634-FF) is pleased to announce that it has mobilized a diamond drilling rig, and will commence Phase One drilling today at Exploits’ 100% owned Schooner Prospect (the “Prospect”), located within Exploits’ Mt. Peyton Project (the “project”) in the Exploits Subzone Gold Belt, Newfoundland.

Michael Collins, President & Chief Executive Officer of Exploits, commented: “Getting a drill turning marks a significant milestone for the team at Exploits. The Schooner Prospect was selected as the first of our five drill targets due to ground magnetics and airborne VTEM geophysical anomalies highlighting a fault system analogous to New Found Gold’s growing Keats and Lotto deposits along the Appleton Fault. Drilling will allow us to develop our understanding of these structural systems which produce gold mineralization in this gold belt.”

About the Schooner Prospect

The Schooner Fault Zone was identified in early 2021 through historical compilation work of historic till samples, re-interpretation of regional magnetic geophysics, and Exploits’ partner GoldSpot Discoveries Corp.’s (TSXV: SPOT) data analysis techniques. The results delineated a fault structure with coincident gold in till samples trending parallel to the Appleton Fault, approximately 3.5 kilometres to the east, that hosts New Found Gold’s Keats, Lotto, and Knob gold discoveries. During winter and spring of 2021, the Company commenced a tightly spaced, high resolution, airborne VTEM geophysical survey as well as two ground magnetic surveys over the Schooner Fault Zone. The geophysical data has been paramount in delineating the primary and secondary faults and highlighting the high priority targets in preparation for drill placement.

Map of the Schooner Prospect

Figure 1: Exploits Discovery Corp.’s Schooner Prospect drill targets. Note: Drill collars in the map are not final and subject to change based on the drill results.

All rock samples are collected by company personnel and bagged in the field with a sample tag for identification. The bags are sealed with tape and kept secure at a company facility until they are transported directly to the lab by Exploits staff.

Rock samples are analyzed at Eastern Analytical of 403 Little Bay Road, Springdale, NL, a commercial laboratory that is ISO/IEC 17025 accredited and completely independent of Exploits Discovery Corp. Eastern Analytical pulverized 1000 grams of each sample to 95% < 89 μm. Samples are analyzed using fire assay (30g) with AA finish and an ICP-34, four acid digestion followed by ICP-OES analysis. All samples with visible gold or assaying above 1.00 g/t Au are further assayed using metallic screen to mitigate the presence of the nugget effect of coarse gold. Standards and blanks are inserted at defined intervals for QA/QC purposed by the Company as well as the lab.

The Company also announces that it has been notified by the Department of Industry, Energy and Technology of the Government of Newfoundland and Labrador that three mineral license applications (31452M, 31453M and 31454M) forming part of its Katie Duder Lake and Gazeebow West projects have been rejected.  The applications were rejected due to the process under which they were submitted.  The Company intends to seek adjudication of the decision with the Mineral Rights Adjudication Board to ensure that its rights to the licenses are protected and will provide further information as it becomes available. These three claims are non core to the company’s current exploration focus and account for a small percentage of the company’s mineral tenure in the Exploits Subzone.

Ian Herbranson, P.Geo, is Vice-President of Exploration for the company and qualified person as defined by National Instrument 43-101. Mr. Herbranson supervised the preparation of the technical information in this news release.

All projects within Exploits’ portfolio lie within the Exploits Subzone.

Exploits believes that the Exploits Subzone, which runs 200 km from Dog Bay southwest to Bay d’Espoir, has been neglected since the last major exploration campaigns in the 1980s. The last 40 years have seen incremental advancements in the understanding of gold mineralization in the camp. The sum of this knowledge is now coming together in discrete and effective exploration models that have delivered discoveries such as New Found Gold’s 2019 discovery. The Exploits Subzone and GRUB regions have been the focus of major staking and financing throughout 2020, with increased exploration activities forecasted in the area moving into 2021. Exploits is financed and with five drill permits in place for an extensive drill program in the Spring of 2021.

The team at Exploits, with significant local experience and knowledge, have studied the entirety of the Exploits Subzone and picked individual land packages for staking or joint venture where there is an opportunity for world class discoveries and mine development. Exploits intends to leverage its local team and the larger shift in understanding and become one of the most extensive explorers in the Exploits Subzone.

The Westfield Town Council voted 7-1 on Tuesday to introduce an ordinance that allows for a downtown redevelopment plan to move forward.It will next … END_OF_DOCUMENT_TOKEN_TO_BE_REPLACED

New York CNN  —  Bed Bath and Beyond is closing another 87 stores as the struggling retailer barrels toward bankruptcy. … END_OF_DOCUMENT_TOKEN_TO_BE_REPLACED