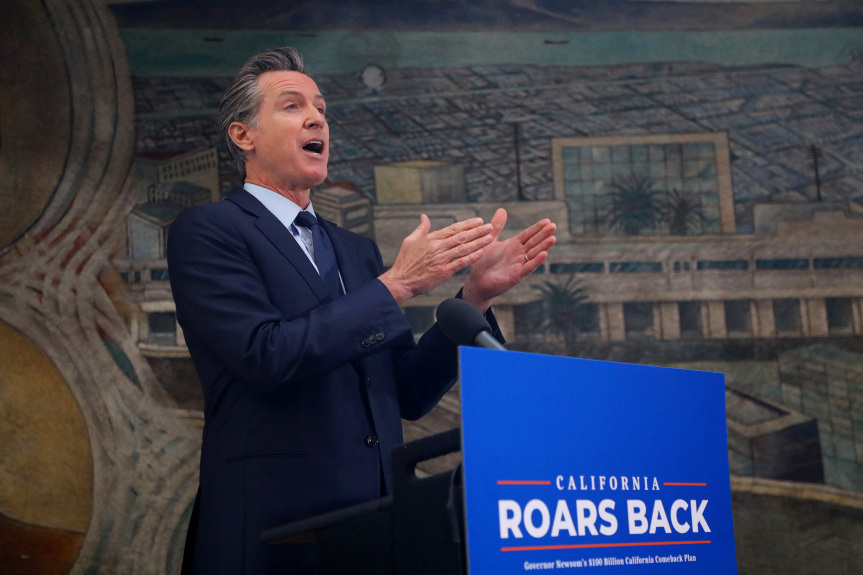 Newsom elaborated on the state’s economy touting various methods taken to stimulate the economy in the wake of the COVID-19 pandemic. “With the largest surplus in California history, we’re using this once-in-a-generation opportunity to create an economic recovery that will leave nobody behind – with money going directly back to Californians, the nation’s largest small business relief programs, and unprecedented investments to address California’s most persistent challenges such as homelessness, climate change and equity in our education system.”

“And while we proudly embrace the California Comeback, this last year reminds us that we need to plan for the unexpected. We must maintain a strong fiscal foundation that does not overcommit the state to long-term spending it cannot afford, which could lead to future cuts.

“I’m grateful for the Legislature’s partnership and am confident we will reach a budget agreement that reflects our shared values and keeps California on a sustainable path of recovery and growth. I look forward to working with legislative leaders to reach an agreement that will address California’s longstanding challenges to give every Californian family – regardless of their race or zip code – the opportunity to thrive.”

Other members of the Legislature did not share the governor’s optimism and had a different take on the passage of the budget. “This is a fake budget and the Democrat-controlled budget process, with no public input or transparency, is a sham,” said Senator Jim Nielsen, R-Red Bluff in a statement.

“Over the years, there have been a number of challenging budget bills with deficits. This year, California has a substantial surplus. The temptation is to spend it and that’s exactly what the Democrats are doing,” he noted adding “The Democrats’ irresponsible budget is funding long-term spending using short-term dollars, which might further burden future budgets and get the state, as it has before, into financial trouble.”

Neilson, who represents the Fourth Senate District, which includes the counties of Butte, Colusa, Glenn, Placer, Sacramento, Sutter, Tehama and Yuba counties warned that following the Budget Act there will be dozens of so-called budget trailer bills. “Many will contain major policy provisions that will circumvent the normal deliberative legislative process,” he noted.

Originally named Hotel Belvedere and located at the intersection of Chase and North Charles Street, the asset was the hotel of choice for an eclectic … END_OF_DOCUMENT_TOKEN_TO_BE_REPLACED

Please be fire aware, and stay and play responsibly. Summer in Flagstaff is a spectacular season of fun in the sun, and Flagstaff365.com is the … END_OF_DOCUMENT_TOKEN_TO_BE_REPLACED

The University of Plymouth, the AHSN Network and Boehringer Ingelheim, has launched evidence-based recommendations to drive inclusive digital health … END_OF_DOCUMENT_TOKEN_TO_BE_REPLACED