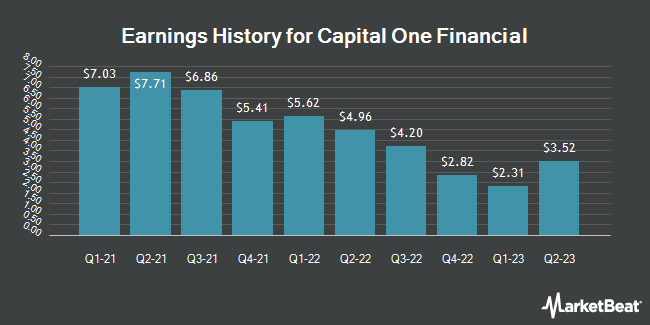 Capital One Financial (NYSE:COF) will post its quarterly earnings results after the market closes on Tuesday, April 27th. Analysts expect Capital One Financial to post earnings of $3.76 per share for the quarter. Parties interested in participating in the company’s conference call can do so using this link.

Capital One Financial (NYSE:COF) last announced its earnings results on Monday, January 25th. The financial services provider reported $5.29 earnings per share for the quarter, beating the consensus estimate of $2.85 by $2.44. Capital One Financial had a return on equity of 3.05% and a net margin of 4.08%. The firm had revenue of $7.34 billion during the quarter, compared to the consensus estimate of $6.92 billion. During the same quarter in the prior year, the company earned $2.49 EPS. The firm’s revenue for the quarter was down 1.2% compared to the same quarter last year. On average, analysts expect Capital One Financial to post $3 EPS for the current fiscal year and $10 EPS for the next fiscal year.

The company also recently disclosed a quarterly dividend, which was paid on Monday, March 1st. Shareholders of record on Wednesday, February 17th were given a $0.40 dividend. The ex-dividend date of this dividend was Tuesday, February 16th. This represents a $1.60 dividend on an annualized basis and a dividend yield of 1.18%. This is an increase from Capital One Financial’s previous quarterly dividend of $0.10. Capital One Financial’s dividend payout ratio (DPR) is currently 13.23%.

He called Bitcoin at $20k… and again at $50k… and now, this Silicon Valley legend reveals a new opportunity for a shot to make up to 5, 7, or even 10 times your money… Whether the price goes up… or down…

This instant news alert was generated by narrative science technology and financial data from MarketBeat in order to provide readers with the fastest and most accurate reporting. This story was reviewed by MarketBeat’s editorial team prior to publication. Please send any questions or comments about this story to [email protected]

By the time you read this Vladimir Tenev, the CEO of the trading app Robinhood, will be testifying in front of Congress. The company’s role in the GameStop (NYSE:GME) short squeeze will be called into question.

However, the real issue at stake is the right of traders to buy and sell the equities of their choice. In the case of Robinhood, some traders are buying a lot of penny stocks. While definitions vary, penny stocks are generally considered stocks that are trading for less than $10 per share. These stocks are largely ignored by the investment community.

One reason is that many of these stocks are cheap for a reason. For example, the company may have a business model that is out of date. In other cases, they operate in a very small, niche market that doesn’t drive a lot of revenue.

And most of these stocks are ignored by the investment community. They simply aren’t considered significant enough to spend time debating.

But some penny stocks do have the attention of Wall Street. And they’re being largely ignored by the day trading community. The focus of this special presentation is to direct you to penny stocks that have a story that the “smart money” thinks will eventually be trading at much higher prices.

And that’s why you should be looking at them now.

View the “7 Penny Stocks That Don’t Care About Robinhood”.

Posts on Truth Social in which users call for civil war and advocate for violence against the FBI remained online Friday, some of them days after they … END_OF_DOCUMENT_TOKEN_TO_BE_REPLACED