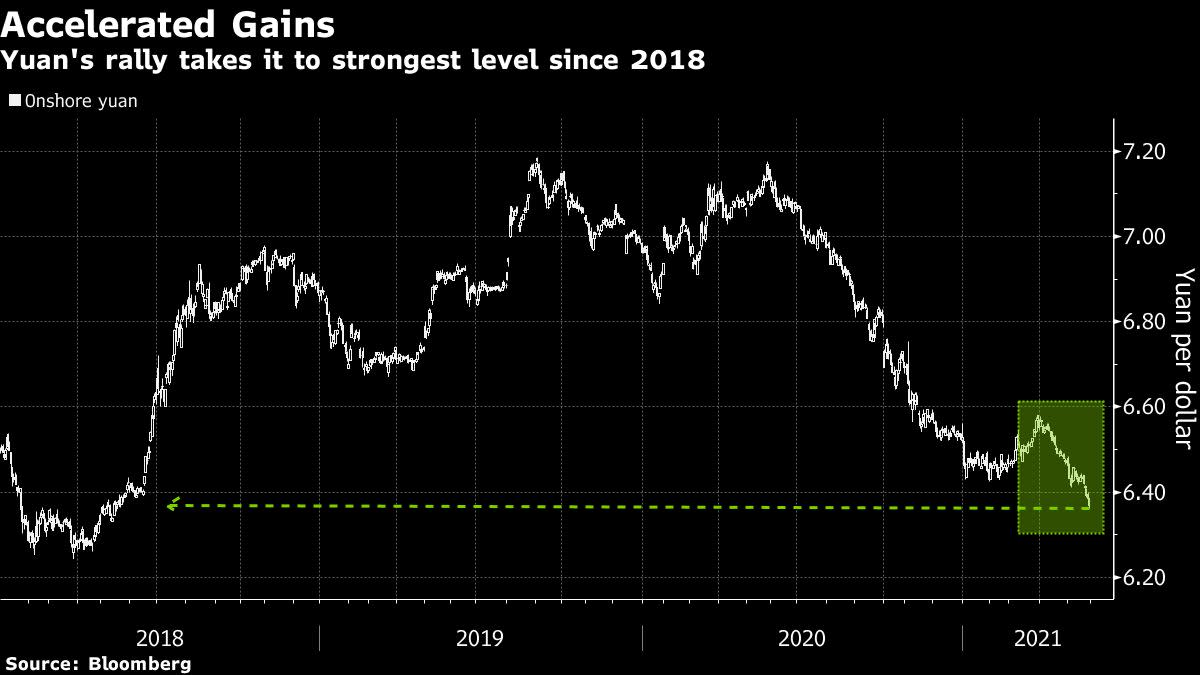 (Bloomberg) — China signaled its tolerance for the yuan’s rally is fading after the authorities set the daily fixing at a weaker-than-expected level and state-run newspapers warned against rapid gains.

Beijing fixed the reference rate at 6.3682 per dollar on Monday, versus the average estimate of 6.3656 in a Bloomberg survey. The rise in the yuan is due to short-term speculation and probably won’t last, Sheng Songcheng, a former People’s Bank of China official told the state-run Xinhua News Agency on Sunday. The central bank-backed Financial News and an ex-regulator also weighed in.

The chorus of comments talking down the yuan follows a subtle shift in policy makers’ stance at the end of last week after earlier messaging appeared to indicate a greater tolerance for a stronger currency. A rapidly rising yuan may draw increased scrutiny in global financial markets, especially at a time when the dollar is losing momentum.

“PBOC seems comfortable with yuan’s direction, just not the pace of its gains that was spurred by speculations of the currency being used to curb imported inflation,” said Fiona Lim, senior currency analyst at Malayan Banking Berhad in Singapore. “The level of 6.20 is still possible over the next 12 months especially if broader dollar weakness takes the dollar-yuan pair to that level.”

With China’s economy rebounding from the pandemic and foreign funds piling into the nation’s equity and bond markets, the yuan has rallied to a five-year high against a basket of trading partners’ currencies. It has climbed this year against all but six of the 31 major currencies tracked by Bloomberg, and is among Asia’s best performers.

China should prevent huge short-term inflows, which could push up the yuan, hurt competitiveness of exporters and affect independent operations of the country’s financial market and monetary policy, Sheng said. Possible inflows to the U.S. from emerging markets and a strong global economic recovery will pose risks to China’s exports, potentially weakening the yuan, according to the editorial from Financial News.

Some big state-run and joint commercial banks bought a large amount of dollars as the yuan quickly pared gains on Monday afternoon, according to three traders. Subsequently, some of the lenders sold the greenback after the Chinese currency fell, said the traders who asked not to be named as they aren’t authorized to talk to the media.

Financial News said in an editorial that the yuan may depreciate in the future due to factors such as U.S. tightening.

The appreciation isn’t necessarily a bullish factor for Chinese stocks, Guan Tao, a former official at the country’s top foreign-exchange regulator, said in an interview with state-run China Securities Journal Monday. That’s because the country’s exporters will come under pressure from the yuan’s rally and the stronger currency doesn’t offset the surge in commodities prices, according to Guan, who is currently the global chief economist of BOC International China.

The PBOC will properly guide expectations on the yuan, and the exchange rate will continue to be decided by market supply and demand, as well as changes in global financial markets, Sheng was cited as saying.

Subscribe now to stay ahead with the most trusted business news source.

Please be fire aware, and stay and play responsibly. Summer in Flagstaff is a spectacular season of fun in the sun, and Flagstaff365.com is the … END_OF_DOCUMENT_TOKEN_TO_BE_REPLACED

The University of Plymouth, the AHSN Network and Boehringer Ingelheim, has launched evidence-based recommendations to drive inclusive digital health … END_OF_DOCUMENT_TOKEN_TO_BE_REPLACED

This year’s Rising Stars of Private Equity has been published at a time of great uncertainty for the sector, as the young professionals on our list … END_OF_DOCUMENT_TOKEN_TO_BE_REPLACED