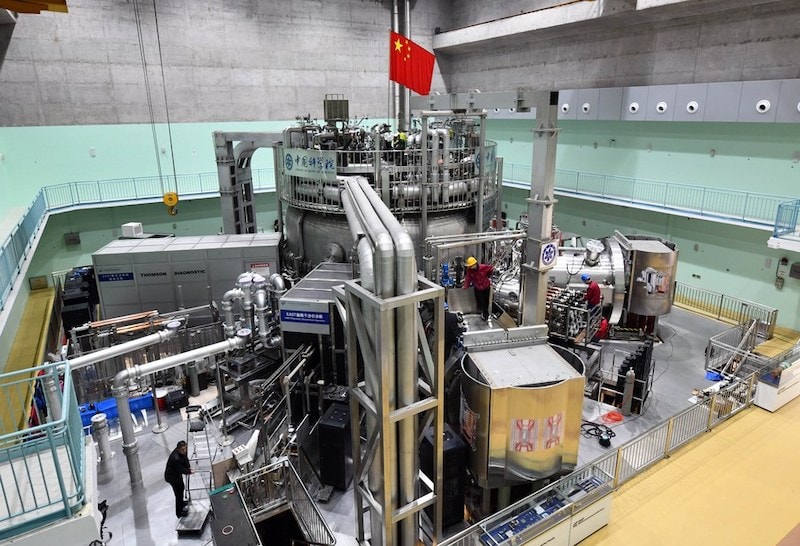 China’s Experimental Advanced Superconducting Tokamak (EAST) has set a new record in the latest experiment, where it achieved a plasma temperature of 216 million Fahrenheit (120 million C) for 101 seconds. Not just that, the scientists working on the “artificial sun”, also achieved 288 million Fahrenheit (160 million C) for 20 seconds, according to state media reports.

Situated at the Institute of Plasma Physics of the Chinese Academy of Sciences (ASIPP) in Hefei, the Tokamak device has been designed to reproduce the nuclear fusion process, something natural to the Sun and stars. The experiment is being carried out to provide infinite clean energy through controlled nuclear fusion. The previous record maintained a plasma temperature of 180 million F (100 million C) for 100 seconds, which has now been broken, a big step towards getting nuclear fusion to work.

According to a report in New Atlas, scientists are currently working on a wide variety of devices to trigger these reactions, but experts said that doughnut-shaped tokamaks, like the EAST, appear to be most promising. The device features a series of magnetic coils designed to hold superheated streams of hydrogen plasma in place for long enough for the reactions to occur.

The Chinese “artificial sun” experiment is part of the International Thermonuclear Experimental Reactor (ITER) facility, a global science project, which is going to be the world’s largest nuclear fusion reactor when it becomes operational in 2035. As many as 35 countries, including China, India, Japan, South Korea, Russia and the US are jointly working on the project. To harness nuclear fusion, achieving a plasma temperature above 100 million C is one of the key challenges. In 2020, Korea’s KSTAR reactor had set a record by maintaining a plasma at over 100 million C for 20 seconds. It is believed that the temperature at the core of the Sun is 15 million C, which also means that the temperature produced by (EAST) is nearly seven times that of the Sun.

It’s an all television spectacular this week on Orbital, the Gadgets 360 podcast, as we discuss 8K, screen sizes, QLED and mini-LED panels — and offer some buying advice. Orbital is available on Apple Podcasts, Google Podcasts, Spotify, Amazon Music and wherever you get your podcasts.

By Rajesh Rege Until very recently, sustainability did not gain currency as a defined corporate objective across a majority of industrial sectors. … END_OF_DOCUMENT_TOKEN_TO_BE_REPLACED

The revelation that a cryptocurrency lobbyist donated £500,000 to the Conservative Party two months before the government pledged to turn the UK into … END_OF_DOCUMENT_TOKEN_TO_BE_REPLACED

WASHTENAW COUNTY – An indoor saltwater pool, vaulted ceilings and rolling hills are the highlights of a spacious 14,000-square-foot estate in between … END_OF_DOCUMENT_TOKEN_TO_BE_REPLACED