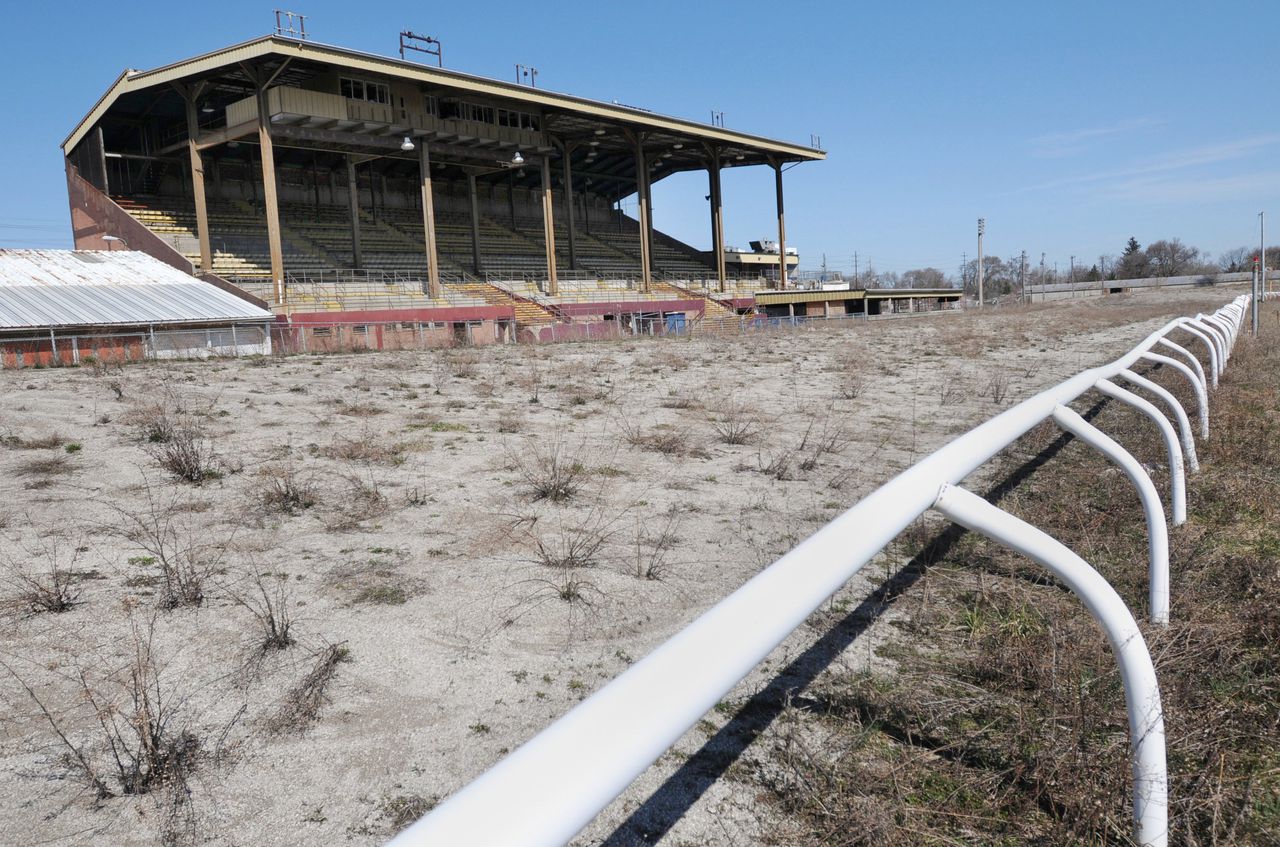 SAGINAW, MI — After standing vacant for and rusting for nearly two decades, what structures remain at the old Saginaw fairgrounds could come crumbling down soon.

In a surprise vote, Monday, Sept. 12, the Saginaw City Council voted to spend up to $1.3 million of its $52 million American Rescue Plan Act funds on demolishing the remaining buildings.

The act could remove a substantial obstacle to pave the way for new real estate development there.

“For so long, it’s just been neglected,” said Councilwoman Autumn Scherzer, who proposed the vote Monday. “Moving this forward — to get the demolition done and cleaned up so we can make some progress there — is so important.”

Saginaw Mayor Brenda Moore said, after Monday’s vote, city officials must still finalize a contract agreement for the stimulus funds with the Saginaw Housing Commission, which owns the old fairgrounds and requested the city’s stimulus-funded support. But Moore was optimistic the vote was a step in the direction of removing the longtime East side eyesore.

“We are really trying to do stuff to move the city forward,” the mayor said. “We heard your cry; we heard what the people have been asking for there. This is going to make a lot of difference for that neighborhood.”

Untended vegetation largely shields the outside world from seeing the 52 acres of sprawling, abandoned real estate at the former fairgrounds. The dilapidated grandstand still towers above most of those visual obstructions.

Beginning about a century ago, that acreage bustled with life and activity. In the 1950s, attendance to the annual 7-day county fair reached 350,000 people, or nearly double the size of Saginaw County’s population today. The site’s prominence once led John F. Kennedy to host a campaign rally there two weeks before he won the presidency in 1960.

That prominence waned as the region began its population decline around that same time. About 6,000 people bought tickets to the last county fair hosted there, leading organizers to end an 88-year tradition in Saginaw and relocate to Chesaning in 2002. Horse racing kept the gates at the old site open until 2005.

Since then, the only humans allowed beyond the entrance gates are permitted access by officials with the Saginaw Housing Commission, which purchased the fairgrounds for $535,903 21 years ago.

Along with the decaying structures on the property, that sale remains a sizable obstacle to redevelopment plans.

In 2001, the commission sought U.S. Department of Housing and Urban Development (HUD) approval to use funds to secure a loan to buy the old fairgrounds. HUD officials told housing commission leaders that operating program funds “could only be used for public housing purposes,” which the commission disregarded, stated a 43-page audit of the commission authored in 2011 by the Office of the Inspector General.

As a result of the audit, HUD announced the commission must repay the federal housing agency $2.8 million, which included the money spent acquiring the fairgrounds as well as funds related to lost potential revenue and site upkeep.

The Saginaw Housing Commission leaders responsible for those decisions two decades ago no longer serve on the organization. Still, their legacy haunts the successors and handicaps the property’s prospects, officials said. While the commission remains the site’s owner, the debt owed to HUD essentially puts the old fairgrounds’ fate in the hands of federal officials.

“We can’t do anything with the property without (HUD’s) permission,” said Lesley Foxx, executive director of the Saginaw Housing Commission, said in May. “We’re hoping the fairgrounds go back to the community, too. What we want to see happen are positive things, and demolishing that blight would be a positive thing.”

Foxx said the most well-rounded, advanced and community-supported plan for the property remains the redevelopment initiative envisioned by members of One Week One Street, a group tied to the New Beginnings Enrichment Center located one block north of the abandoned fairgrounds.

In 2013, the group set its sights on a makeover of a grand scale at the old fairgrounds. The $7.3 million proposal included playgrounds, a splash pad, an amphitheater, a sledding hill, an ice skating rink, walking trails, a bicycle park, baseball and softball diamonds, a soccer and football field, a picnic shelter, gardens, a greenhouse, wetlands, ponds, and stretches of wide-open spaces to enjoy nature within the massive 52-acre site.

The redevelopment idea also preserved some elements of the existing facilities including, most significantly, the still-standing gateway entrance that was added to the National Register of Historic Places in 2015.

The vote during Monday’s Saginaw City Council meeting did not appear on the group’s agenda of proposals. Scherzer proposed the stimulus allocation at the end of the gathering, and her resolution received unanimous support. Mayor Pro Tem Michael Balls was absent from the meeting.

There were signs before Monday that the council would support demolition funds for the fairgrounds, though. Members last September identified revitalizing the old fairgrounds property as a top priority.

Scherzer said those prior discussions in part provided her the confidence to propose Monday’s vote.

The first stimulus expenditure was approved in February, when the council OK’d its contract with Guidehouse, a consultant helping Saginaw with its stimulus-spending strategy. The 3-year deal could cost up to $850,000, although city officials said the final cost likely will fall short of that amount. The contract amount will be determined by the level of services provided by Guidehouse’s staff over the course of the three years.

The council in May approved the second expenditure tied to the city’s $52 million stimulus. That’s when council members unanimously approved spending $864,750 on hazard pay for municipal employees who performed services during the first year of the COVID-19 pandemic.

The $52 million stimulus set aside for Saginaw arrived via a $1.9 trillion American Rescue Plan Act signed into law in March 2021. The stimulus provided $350 billion for local and state governments. Michigan municipalities received $10.9 billion from the stimulus bill.

Want to paddle the Tittabawassee River while drinking local brews this fall? Here’s your ticket.

Washington [US], October 3 (ANI): Some recent reports have claimed that the large camera housing on Apple's iPhone 14 Pro smartphones hinders the … END_OF_DOCUMENT_TOKEN_TO_BE_REPLACED

Hello again everybody and welcome to our live blog with all of the latest financial news coming out of the United States this Sunday, October 2. Our … END_OF_DOCUMENT_TOKEN_TO_BE_REPLACED

October 2022 Listing your home for sale is a marathon, but there are some easy tips and tricks to get ahead of your competition. Some of the easiest … END_OF_DOCUMENT_TOKEN_TO_BE_REPLACED