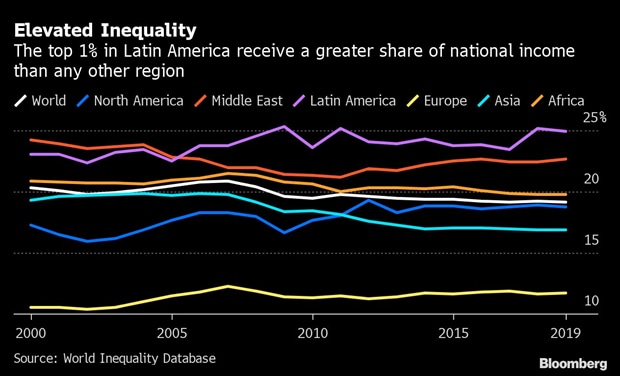 Just as some patients recovering from Covid-19 suffer long-lasting symptoms, it’s becoming clear that the same will be true for the global economy once this year’s V-shaped rebound fades.

While $26 trillion worth of crisis support and the arrival of vaccines have fueled a faster recovery than many anticipated, the legacies of stunted education, the destruction of jobs, war-era levels of debt and widening inequalities between races, genders, generations and geographies will leave lasting scars, most of them in the poorest nations.

“It’s very easy after a gruelling year or more to feel really relieved that things are back on track,” said Vellore Arthi of the University of California, Irvine, who has examined the long-term health and economic hit from past crises. “But a lot of the effects that we see historically are often for decades and are not easily addressed.”

All told, the decline in gross domestic product last year was the biggest since the Great Depression. The International Labour Organization estimates it cost the equivalent of 255 million people full-time jobs. Researchers at the Pew Research Centre reckon the global middle class shrank for the first time since the 1990s.

The costs will fall unevenly. A scorecard of 31 metrics across 162 nations devised by Oxford Economics Ltd. highlighted the Philippines, Peru, Colombia and Spain as the economies most vulnerable to long-term scarring. Australia, Japan, Norway, Germany and Switzerland were seen as best placed.

“Getting back to the pre-Covid standard will take time,” said Carmen Reinhart, the World Bank’s chief economist. “The aftermath of Covid isn’t going to reverse for a lot of countries. Far from it.”

Not all countries will be affected equally. The International Monetary Fund sees advanced economies less affected by the virus this year and beyond, with low-income countries and emerging markets suffering more — a contrast to 2009, when rich nations were hit harder. With U.S. GDP next year forecast to be even bigger than projected before Covid-19, propelled by trillions of dollars in stimulus, the IMF’s projections show little residual scarring from the pandemic for the world’s No. 1 economy.

The World Bank warned in a January report of “a decade of global growth disappointments” unless corrective action is taken. It estimated global output was on course to be 5% lower by 2025 than its pre-pandemic trend and that the growth rate at which inflation ignites is set to drop below 2% in the next decade, having already declined to 2.5% in the 2000s from 3.3% in the prior decade.

Experts, including Arthi, say there needn’t be a lost decade if the right policy steps are taken, especially in the areas of reskilling workers and putting a floor under those hit hardest by the crisis. One way out includes encouraging policies that create incentives for business to innovate and invest, particularly in climate change. Central banks and most governments are already signaling they will keep stimulus running hot.

The right kind of policy mix could push the rebound towards a full recovery, according to Catherine Mann, chief economist at Citigroup Inc.

Countries that were quick to control the virus are sending warning flares about the uneven road ahead. After initially enjoying a V-shaped recovery, New Zealand’s economy contracted in the final three months of 2020 as the absence of foreign tourists left a hole that locals couldn’t fill. Now, the country that consistently topped Bloomberg’s Covid resiliency rankings faces the prospect of a double-dip recession.

In China, where the pandemic has been under control for almost a year, retail spending has lagged the broader recovery.

“Focusing on headline GDP, with the U.S and China engines humming the world is set for a triumphant ‘V’ shape recovery. Beneath the surface, divergence between advanced and emerging markets, superstar firms and their smaller rivals, and high- and low-skill workers points to scars that will take longer to heal.”

How consumer confidence and spending patterns are shaped by ongoing concerns regarding health and hiring could end up being one of the crisis’ most important economic legacies, just as the Great Depression of the 1930s led to greater thrift. That’s a risk even though many people racked up savings during the past year.

“There’s genuine uncertainty over how much people’s behavior in terms of consumption patterns changes as a result of this crisis,” said Adam Posen, president of the Peterson Institute for International Economics. “If people go back to eating in restaurants, doing leisure travel, working out in gyms then a lot of those industries will revive. But it’s also possible that people’s tastes just genuinely change, in which case there is going to be transitionally more unemployment and there’s no good government fix for that.”

History shows that five years after country-specific recessions, long-term growth expectations were typically 1.5 percentage points lower than in those without recessions, according to the World Bank.

The crisis has accelerated the use of robots in both manufacturing and in the services industry as workers and customers need to be protected from the spread of disease. While that’s spurring hopes for a revival in productivity growth, millions of jobs will be threatened with a question mark over whether enough new ones will be created in the process.

Over 100 million people in eight of the world’s largest economies may need to switch occupation by 2030, according to McKinsey & Co. Those most likely to suffer skill gaps are the less educated, women, ethnic minorities and the young.

The longer people are out of work the more their skills atrophy in a process known as hysteresis.

“A lot of those jobs are gone forever,” said Eric Robertsen, Standard Chartered Plc’s global head of research. “Low-wage job in marginal companies or marginal sectors are gone as the companies have gone bankrupt or the sectors have been hollowed out. A lot of the more-adaptive companies will have filled the void but with fewer workers.” 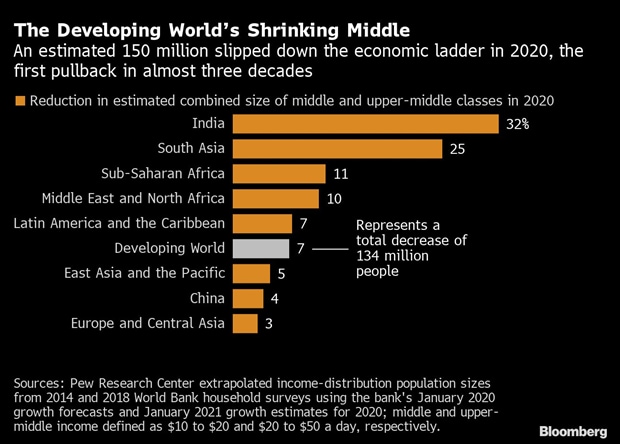 Even where jobs aren’t lost, work patterns have shifted and it remains an open debate about how those changes will impact wage packets.

Longer-term effects will also be evident in human capital after the pandemic locked out children and university students from classrooms for as much as a year in some countries.

The Organization for Economic Cooperation and Development calculated in September that even a loss equal to a third of a year for pupils affected by closures when the pandemic was declared could curb a country’s GDP over the remainder of the century. Students in grades 1-12 may see 3% lower income over their lifetimes, the OECD warned, with the poor or those from minority backgrounds hardest hit.

How to finance a full recovery will be complicated by the extra $24 trillion in borrowing that the world took on in 2020, bringing total debt to a new high of $281 trillion, according to the Institute of International Finance.

Even without a debt crisis, once interest rates start to rise both governments and companies will come under pressure, according to Mark Zandi, chief economist of Moody’s Analytics.

First-time jobless claims in the state increased by 40%, according to a government report.For the filing week ending July 30, the number of initial … END_OF_DOCUMENT_TOKEN_TO_BE_REPLACED

After landing 2025 outfielder Wesley Bass last week, Georgia Tech Baseball got another talented player to commit from the state of Georgia. Dominic … END_OF_DOCUMENT_TOKEN_TO_BE_REPLACED