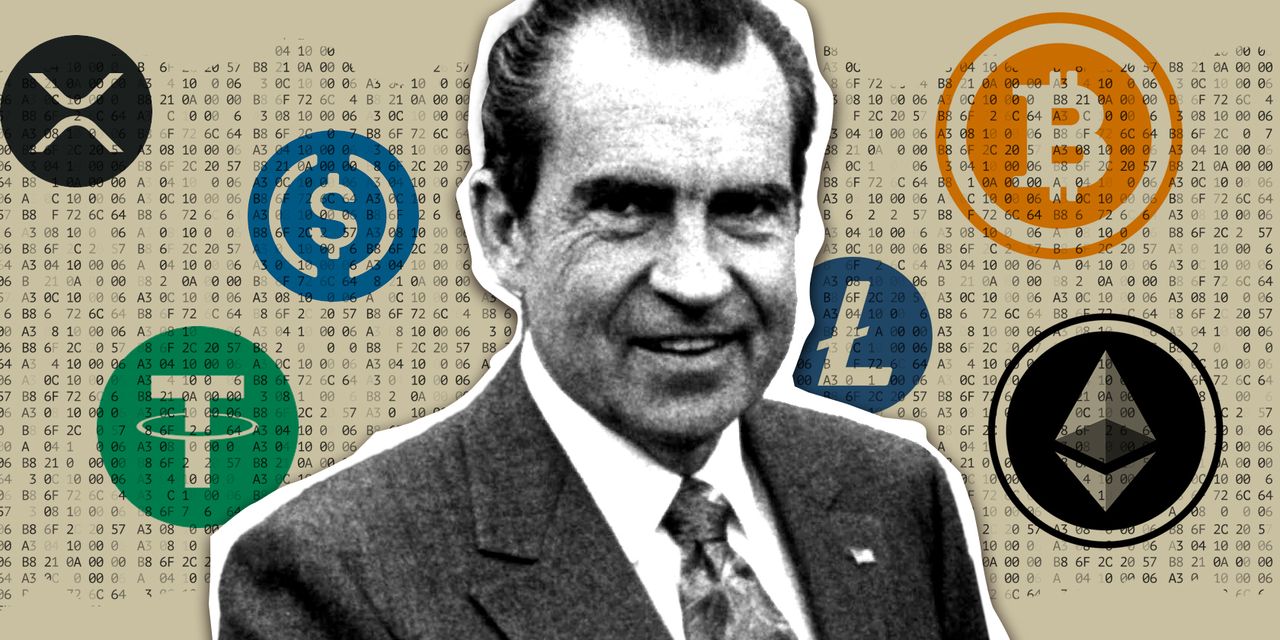 Is the global economy steering toward a Bretton Woods for the digital-currency age?

Sunday marks the 50th anniversary of what has been described as the dropping of a “monetary bombshell” on the world financial system, when President Richard Nixon announced that the U.S. dollar would no longer be pegged to gold
GC00,
+0.19%,
effectively yanking America out of an international currency regime established by the Bretton Woods agreement.

The international monetary system was forged in the 1940s amid the fight against fascism and global economic instability. The primary aim of the Bretton Woods agreement was to create a currency system less rigid than the gold standard while providing financial stability. As part of the effort, the conference laid the foundations for the International Monetary Fund and the World Bank.

Now, five decades later, the monetary regime in the wake of the dissolution of the Bretton Woods system on Aug. 15, 1971 isn’t that much different. The U.S. dollar still serves as the reserve currency of the world, but in an era of bitcoin
BTCUSD,
-0.27%
and blockchain-backed currencies, the rise of stablecoins pegged to fiat currencies, and central bank digital currencies, or CBDCs, a new global regime is emerging.

“It’s very clear that there is a need for a reckoning of the challenges of the current financial system,” Sheila Warren, the World Economic Forum’s head of blockchain, digital currency and data policy, told MarketWatch in a Friday phone interview.

Warren said that “the present [monetary] situation isn’t working for enough people effectively,” and underscored the economic gaps between countries as one key reason a sweeping digital-era Bretton Woods could be effective.

“The case for an international currency is as strong today as it was then, but remains difficult to implement,” wrote Ousmène Jacques Mandeng, director of advisory boutique Economics Advisory Ltd, in a guest column in the Financial Times published Monday (paywall). Mandeng described the depegging of gold from the dollar in 1971 as “a monetary bombshell.”

There are a few similarities between the period of Nixon and 2021. Inflation picked up steam in the 1960s and reached nearly 6% in 1970, and world dollar reserves rose sharply. Inflation was running at around 5.4% over the past 12 months from 1.4% in 2020, according to the Bureau of Labor Statistics.

However, the share of U.S. dollars held in global foreign exchange reserves is around the lowest levels in 25 years, during the fourth quarter of 2020, the most recently available data, according to the IMF’s Currency Composition of Official Foreign Exchange Reserves survey.

Meanwhile, the supply of stable coins, like Tether
USDTUSD,
-0.03%
and Circle-backed USDC digital currencies usually underpinned by a fiat currency or some other traditional asset to keep values fixed, has climbed by 900% to over $100 billion from a year ago, the Block reported in late May.

Cryptocurrencies like bitcoin haven’t become widely used as a means of payment, in part because their values are volatile relative to the U.S. dollar
DXY,
-0.55%
or other government-backed currencies.

However, crypto bulls see stablecoins as essential for expanding the use of digital currencies for daily purchases. And advocates of a so-called central bank digital currency have argued that a CBDC could function similarly to a stablecoin, but with reduced risk and the full faith of the government.

A movement toward a digital regime may already be under way.

U.S. Treasury Secretary Janet Yellen recently convened a meeting of regulators, including U.S. Securities and Exchange Commission head Gary Gensler, to discuss stablecoins, in light of the rapid proliferation of the digital assets and concerns about the underpinnings of the digital-ledger pegged currency.

Critics of stablecoins say stablecoins pose significant risks to financial stability, especially after it was revealed that some of these fiat-linked tokens aren’t 100% backed by actual U.S. dollars or other liquid assets, and instead are secured by a combination of riskier assets that could buckle during a market crisis.

Kenneth Rogoff, a professor of economics and public policy at Harvard University, told MarketWatch in a Friday phone interview that he can understand why stablecoin supply, in particular, has exploded.

“A lot of it is the unease, not just with the Chinese but the Europeans, with the U.S. controlling the rails of the global [monetary] system because the dollar is so dominant,” Rogoff said.

Rogoff said that stablecoins offer an interesting potential use-case for governments different from CBDCs but also presents challenges for monetary policy makers. “I think regulators want to be cautious not to use regulation as a way to protect the incumbents [like bricks-and-mortar banks], especially if there is an alternative approach.”

The former chief economist of the IMF from 2001 to 2003 said that he thinks that there is still a lot to do before any CBDC meets the requirements for use by central banks. He said that CBDCs need to have the same level of transparency, speed and ease of use that the U.S. Federal Reserve currently enjoys with the existing system.

“The endgame is this: How can we regulate [digital currencies] so that the central bank feels comfortable that they will be your lender of last resort?” Rogoff said.

“The game-changer would be if CBDCs were interoperable,” writes Barry Eichengreen, professor of economics at the University of California, Berkeley, and a former senior policy adviser at the International Monetary Fund, in a column for Project Syndicate published Tuesday.

WEF’s Warren said that an “awful lot of coordination” would be needed to achieve a Bretton Woods-style accord for the digital age but feels like the lack of a deliberate concerted global effort so far amid the deadly pandemic has been one of the “greatest tragedies of her generation.”

In 2008, the first digital currency, bitcoin, was minted by a person or persons, identifying themselves as Satoshi Nakamoto. SEC Chairman Gensler earlier this month at the Aspen Security Forum said that “at its core, Nakamoto was trying to create a private form of money with no central intermediary, such as a central bank or commercial banks.” but “no single crypto asset, though, broadly fulfills all the functions of money.”

For his part, Rogoff views crypto more broadly as not a solution looking for a problem but simply put: “a problem.”

“Ransomware, tax evasion, crime: It is the Wild West,” he said of digital assets.

What’s on deck next week?

After the S&P 500 index
SPX,
+0.16%
and the Dow Jones Industrial Average
DJIA,
+0.04%
on Friday booked four straight record closes for the first time since 2017, investors will be focused mainly on U.S. July retail sales data at 8:30 a.m. ET Tuesday and the minutes from the Federal Open Market Committee’s last meeting due at 2 p.m. on Wednesday to glean further clues about the health of the economy and the central bank’s monetary policy plans.

Wednesday also brings reports on housing starts and building permits at 8:30 a.m. that likely will be followed for insights on the home market, which is showing signs of cooling.

Investors may also watch a reading of manufacturing in the New York state area for August, Empire State manufacturing index at 8:30 a.m. on Monday, a similar report for the Fed’s Philadelphia region on Thursday, as well as the usual weekly jobless benefit claims report at 8:30 a.m.

Please be fire aware, and stay and play responsibly. Summer in Flagstaff is a spectacular season of fun in the sun, and Flagstaff365.com is the … END_OF_DOCUMENT_TOKEN_TO_BE_REPLACED

The University of Plymouth, the AHSN Network and Boehringer Ingelheim, has launched evidence-based recommendations to drive inclusive digital health … END_OF_DOCUMENT_TOKEN_TO_BE_REPLACED

This year’s Rising Stars of Private Equity has been published at a time of great uncertainty for the sector, as the young professionals on our list … END_OF_DOCUMENT_TOKEN_TO_BE_REPLACED