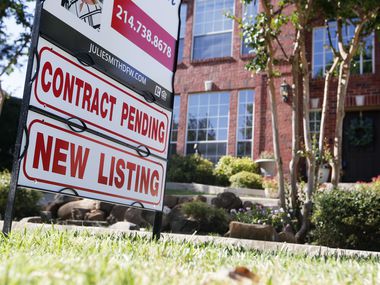 North Texas home prices will continue to rise next year, but probably at half the near record rate of 2021.

Dallas-Fort Worth home costs are predicted to rise by 9.4% over the next 12 months, according to a new forecast by California-based Veros Real Estate Solutions.

That’s more than the U.S. average 7% price rise expected in the year ahead.

But it’s a big decline from the 18% increase in median North Texas single-family home sales prices during the first nine months of 2021.

“Although we expect some upward pressure on interest rates, they are likely to remain low into 2022,” he said. “This historically low interest rate environment in conjunction with numerous other factors is pointing to a continued robust housing market.”

Veros predicts that the biggest home price jumps next year will be in metro areas in Idaho, Utah and Arizona which will continue to see double-digit percentage annual home price appreciation.

“Cities in the West, again, occupy the majority of the top 10 metro areas,” according to Fox.

Among Texas’ major markets, the biggest price gains are expected – no surprise – in the Austin area. Veros is forecasting about a 13% home price gain for Austin, which is less than half of recent year-over-year housing price increases.

The Houston area is forecast to have a 6.5% home price rise.

Odessa and Midland were at the top of the list of markets Veros thinks will have smallest price gains at 0.8% and 1.5%

Veros’ price forecast for Dallas-Fort Worth is much higher than some recent predictions that housing costs would only rise by low single-digit percentages next year.

CoreLogic recently predicted that Dallas-area home prices would fall by 1% over the next year. But previous similar forecasts have missed the mark.

“While some other national residential forecasting groups have said, or are now saying, the U.S. is in a housing bubble that will burst or that the rate of appreciation is set to drastically reduce to low single digits or even depreciate over the upcoming 12 months, Veros continues to disagree with this assessment,” the forecasters say. “As set forth in its recent quarterly projections, Veros does not believe that present conditions resemble conditions that were present during the housing bubble of 2007-2008.”

North Texas single-family home costs have soared by more than 50% in the last five years.

Traditionally home prices in the area averaged 4% to 5% annual gains.

A shortage of houses on the market has kept local home prices rocketing higher.

But preowned home sales in the area by North Texas real estate agents have been down during each of the last four months compared to the same period in 2020.

The dip in home buying is due to a combination of unaffordable pricing and scant properties for sale, analysts say.

Beijing [China], July 6 (ANI): Oppo is preparing another 5G smartphone, as revealed on a leaked spec sheet. The Oppo A97 5G is now listed on China … END_OF_DOCUMENT_TOKEN_TO_BE_REPLACED

seb_ra / iStock.com It’s National Fried Chicken Day, and while today’s top financial stories might not all be finger-licking good, you … END_OF_DOCUMENT_TOKEN_TO_BE_REPLACED

Originally named Hotel Belvedere and located at the intersection of Chase and North Charles Street, the asset was the hotel of choice for an eclectic … END_OF_DOCUMENT_TOKEN_TO_BE_REPLACED