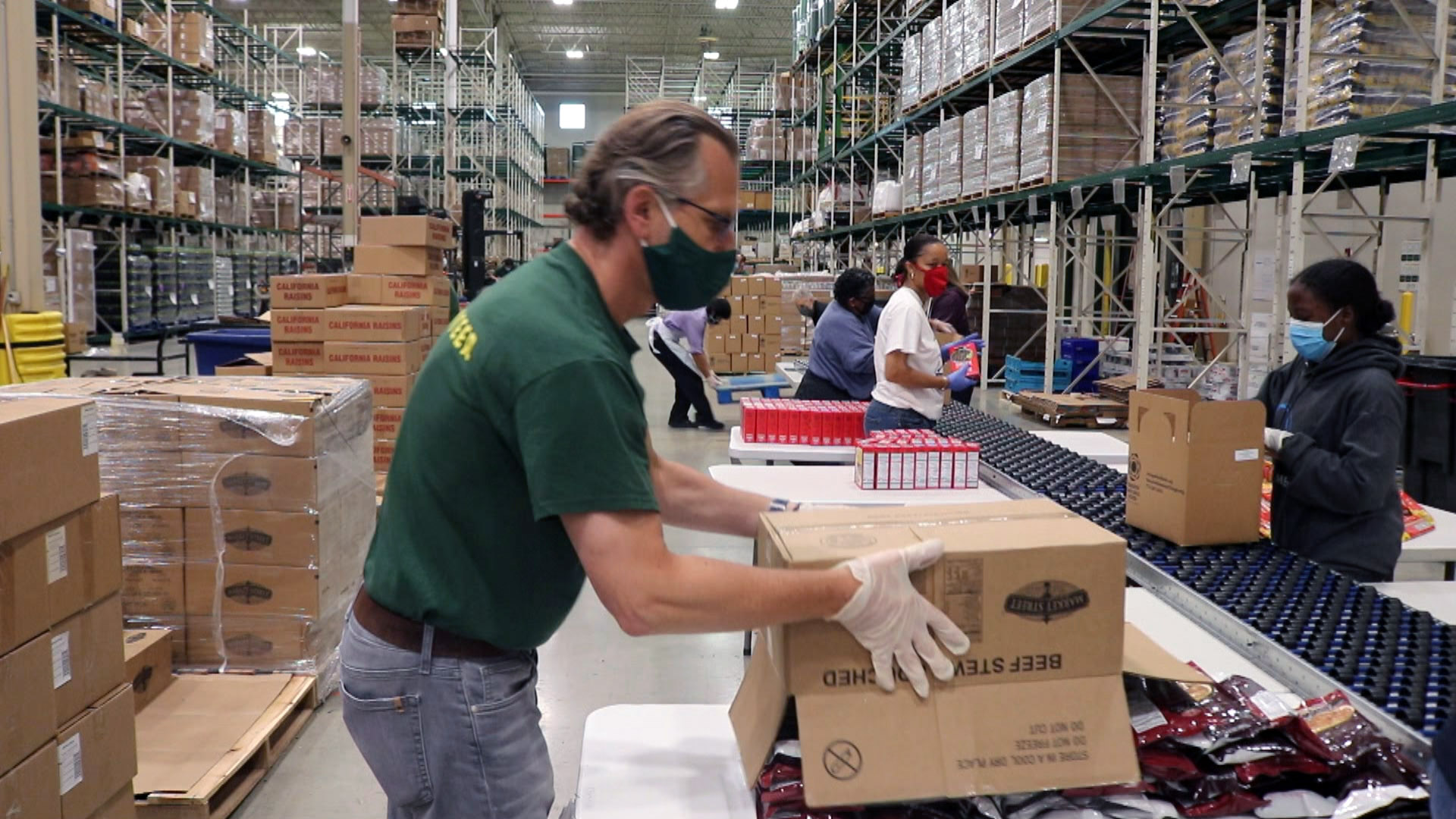 
This story is part of WTTW’s Firsthand initiative exploring poverty in Chicago.

The Greater Chicago Food Depository, which supplies food pantries across the Chicago area, says in its more than 40-year history it has never seen a hunger crisis like the one caused by the COVID-19 pandemic.

The situation may be easing somewhat as the economy bounces back, but the national nonprofit organization Feeding America projects that more than 613,000 residents of Cook County — roughly 12% — will struggle this year to meet their most basic of needs: food.

Gregory Gross, executive director of Care for Real, a food pantry in Edgewater on Chicago’s North Side, said they saw an enormous increase in demand because of the pandemic.

“In 2020 we saw a 143% increase in new client registrations for our food pantry,” Gross said. “That led to about 40,000 visits to our food pantry last year. We also responded to the pandemic by opening a second food pantry in Rogers Park … that second pantry, just in the one year that it was open, had 8,000 visits.”

Gross says that they have so far been able to meet the needs of everyone who has come to them for help, but he believes many people may be reluctant to ask for assistance.

“I can say we have met the demand of the folks who are coming. We haven’t had to turn away anyone who has come, and we didn’t even close one day during the pandemic,” Gross said. “I will say that if everyone who is in need were to come to the food pantry, then no, we would not have the resources that we need to be able to respond to everyone who is experiencing food insecurity.”

Gross says there remains a stigma that many people feel about asking for help.

“So many of the folks who are coming to the food pantry for the first time, they have never been in this situation before,” he said. “They’ve suddenly lost their job, they’ve suddenly lost their income – and as we know, so many people are living paycheck to paycheck. Folks who are coming here will often describe how they’ve really had need for a long time, several months if not more. And they’ve gone through their savings. They’ve gone through all of their resources. They’ve started asking friends and family for help before they finally turn to the food pantry. And I think that’s because of so much stigma that is out there.”

Nicole Robinson, who is chief partnerships and programs officer for the Greater Chicago Food Depository, said they saw an astronomical increase in demand because of the pandemic.

“During the height of the pandemic we saw as high as a 150% increase in the number of individuals and families who were showing up at a soup kitchen or food pantry or shelter,” Robinson said. “That was at the height. Those levels have dropped considerably … but we’re still above pre-pandemic levels.”

One of her concerns is the end of the eviction moratorium in Illinois, which Gov. J.B. Pritzker has indicated he will lift in August.

There are also clear disparities by race.

According to data compiled by Northwestern University, from September 2020 to February 2021, more than 36% of Black families with children suffered food insecurity. For Latino households that number was 28% and for white families 17% — less than half the rate for Black families.

Eric Clark has also seen a rise in demand for food pantry services. He’s the director of the Sheldon Heights Food Pantry, which primarily serves African American seniors in Roseland and West Pullman.

“The demand has gone up, but what is surprising me the most is not the demand going up from our regular clients, it is the demand is coming from individuals who have never been to a food pantry before,” said Clark. “That’s where I think food pantries and the food depository is going to be the most helpful. At the moment we are signing up anywhere from 8 to 10 to sometimes 15 new clients every week.”

Clark agreed with Gross that the feeling of stigma or shame over asking for assistance means that many people delay seeking help.

“That is a big hindrance,” Clark said. “Pride can get in the way of allowing someone to actually accept that they are in dire straits and need help.”

He recalled the story of a recent visitor to his pantry.

“There was as gentleman who came into the pantry. First time there. Went through our process of being signed up and signed in. And he picked up some milk and moved on to our meat station. Was given three or four different pieces of meat. And all of a sudden he just stopped and started crying,” said Clark. “Some of our volunteers walked over to him and said, ‘Sir is there anything we can do? Are you OK?’ and he just said, ‘Thank you. Thank you so very much for this blessing.’ And he proceeded to tell us this story about how he and his wife had just left the pawn shop to sell all their jewelry.”

Note: This story will be updated with video.

One of Georgia Tech's most impactful incoming transfers could be EJ Jenkins. Jenkins is coming over from South Carolina, where he was used as a wide … END_OF_DOCUMENT_TOKEN_TO_BE_REPLACED

In 2021, Las Vegas experienced its most frenzied market in years. Any agent could put a house on the market and it had a considerable chance to sell. … END_OF_DOCUMENT_TOKEN_TO_BE_REPLACED