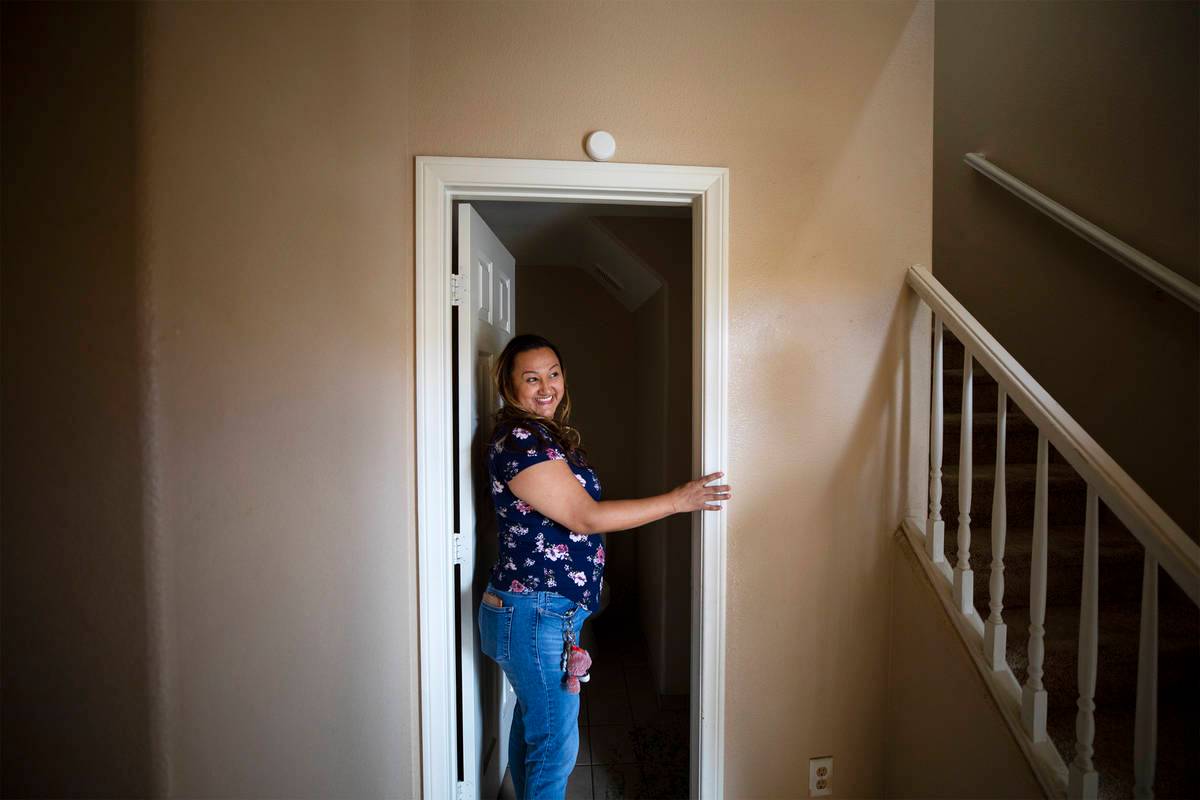 The day-old listing, asking nearly $199,000, was well-maintained with a fresh paint job. Minutes later, her expression was less enthusiastic.

Phinsee was around the corner viewing a second town home with a similar layout. The owner of the newly listed two-story property, with a faint smell of cigarettes, was asking $210,000, and the home needed significant updates.

It’s a phrase Phinsee repeated while touring the home, yet she agreed with her real estate agent, Cassidy Cotten, to place an offer in addition to an offer on the first town home. Cotten gave her a high-five, saying they will see what happens. That’s because both properties had already received offers.

The Las Vegas housing market has become fiercely competitive for buyers in recent months as the region experiences record-low inventory and rising home prices. And the battle to find a home is even more challenging for first-time buyers.

Buyers like Phinsee are learning to place offers within minutes of entering the home even if it’s not their first choice while others are sending letters to homeowners, whose properties are off the market, with the hope they will be persuaded to sell.

“It’s scary and overwhelming, and you may put in some offers that get rejected, but if you do not do those things, you will not get a house,” said Cotten, of Simply Vegas Real Estate. “It’s not going to fall in your lap. We have to be aggressive right now.”

Homie Social Impact Manager Elias Benjelloun said there are other reasons besides a lack of inventory that are pressuring first-time buyers.

“The buyers that are going to have an advantage are going to be the ones that … may have some equity in their home that’s going to help them buy their next home,” Benjelloun said. “First-time homebuyers generally don’t have those options, and if you’re a first-time homebuyer leaning on down payment assistance, then there’s even less options. You need an FHA-approved home.”

The number of Las Vegas Valley residential homes on the market last month was 2,237, down significantly from over 7,000 homes in March 2020, according to a report from Chicago Title Las Vegas. The report does not include homes under contract.

In a normal market, there are between 6,000 and 7,000 active listings in the valley, Cotten said, noting the competition has become “extreme.”

Adrienne Allen, a broker at Homie, said this year is presenting more unique challenges that any other year in her two-decade career.

With offering housing education and counseling services, the organization implements the first-come, first-serve Workforce Initiative Subsidy for Homeownership, or WISH program, which provides a 4-to-1 match of up to $20,000 toward down payment costs.

Saccomani said the funds are released annually in April and usually gone by September. She received the organization’s first batch of WISH pre-approvals last week, including the approval letter for Phinsee.

“It’s challenging because right now, even if they get their conditional approval for WISH funds, the challenge is going out and finding a house that’s going to be in their price range,” Saccomani said.

Allen said many first-time buyers can’t compete when their competition is able to pad their offers, often paying thousands over appraisal and sometimes in cash.

“Some buyers have gotten discouraged and decided to wait maybe even a year to see if the market adjusts, but there’s also some that don’t have a choice — they need to buy a house,” Allen said.

One tactic she has used with first-time buyers is to have them write a letter to a homeowner whose property is not on the market. The letter explains that a buyer is interested in the property with the amount the buyer is willing to offer. The strategy hasn’t worked yet, but Allen said she is “never ever going to give up on doing that.”

Las Vegan Chris Skelton is in the early stages of the homebuying process. Skelton and his wife, Jessica, have saved $13,000 over the course of two years by practicing “extreme fiscal responsibility.”

“We have saved our tax returns (refunds), stimulus checks — everything,” he said.

They’re switching lenders after a second lender told them last week they could, in fact, qualify for down payment aid. Without the second opinion they would have called it quits, Skelton said.

“The most challenging, honestly, is coming up with funds for the down payment,” he said, adding the couple’s combined income is in the $70,000 range. “I’m trying to remain optimistic on the down payment assistance program, but ultimately if we don’t qualify, we’re just going to have to continue renting.”

Phinsee also started saving two years ago for a home, a process that has included boosting her credit score and changing careers.

The single mother, who is also in school, was a hair stylist until the pandemic caused her to be out of work when she was looking to apply for the WISH program, which requires an applicant to show at least six months of employment history.

So Phinsee went back to working in health care, an industry she worked in before becoming a hair stylist. She has been with her employer, United Healthcare, for nine months and was able to qualify for the WISH grant, receiving her pre-approval last week.

“It was hard because I definitely want to go back to the (hair) salon, but I had to position myself to be ready for this,” she said.

“I’m not as nervous now that I was approved for the WISH program because it puts me at a bigger amount … but it’s a seller’s market, so paying more for a home than what I would want makes me a little nervous.”

She is worried about finding a home and pointed to the line of potential buyers often seen outside of an open house.

She recalls recently having plans to visit three listings with her real estate agent Cotten. As they were driving to the second home, Cotten received a text message from the seller’s agent, saying the seller had accepted an offer and the property was off the market.

They turned the car around and headed toward the third listing.

“We were walking through the third home, and I asked Cotten, ‘What do you think about this one?’ and he said, ‘Well, I think it was a good house except it’s now under contract,’” Phinsee said. “So, that’s how difficult it is.”

North Las Vegas resident Megan Aaron has faced a similar experience with open houses. She has started looking for her first home after qualifying last week for a program offered by the Neighborhood Assistance Corporation of America.

“Going to some of these open houses — how can I describe it?” Aaron said. “It’s dinnertime and you’re in the lion’s den and you just (better) beware.”

She recalls going to an open house in Henderson on a Friday then learning Monday that the home, on the market for $300,000, had sold.

Aaron, who has been saving for two years for a home, said the frenzy does make her uneasy, joking that she may need to offer gifts to a seller since she can’t compete with move-up buyers offering as much as $20,000 over asking.

“I’m like, ‘What do I need to do?’ Are we talking Bath & Body Works basket? A bread basket?” she said. “I’m nervous, but I believe everything happens for a reason and whatever is meant to be mine will be mine, but it does kind of light a fire (under me).”

Harrison Butker is going to be playing for another Super Bowl with the Kansas City Chiefs.Butker nailed the game-winning field goal to send the Chiefs … END_OF_DOCUMENT_TOKEN_TO_BE_REPLACED