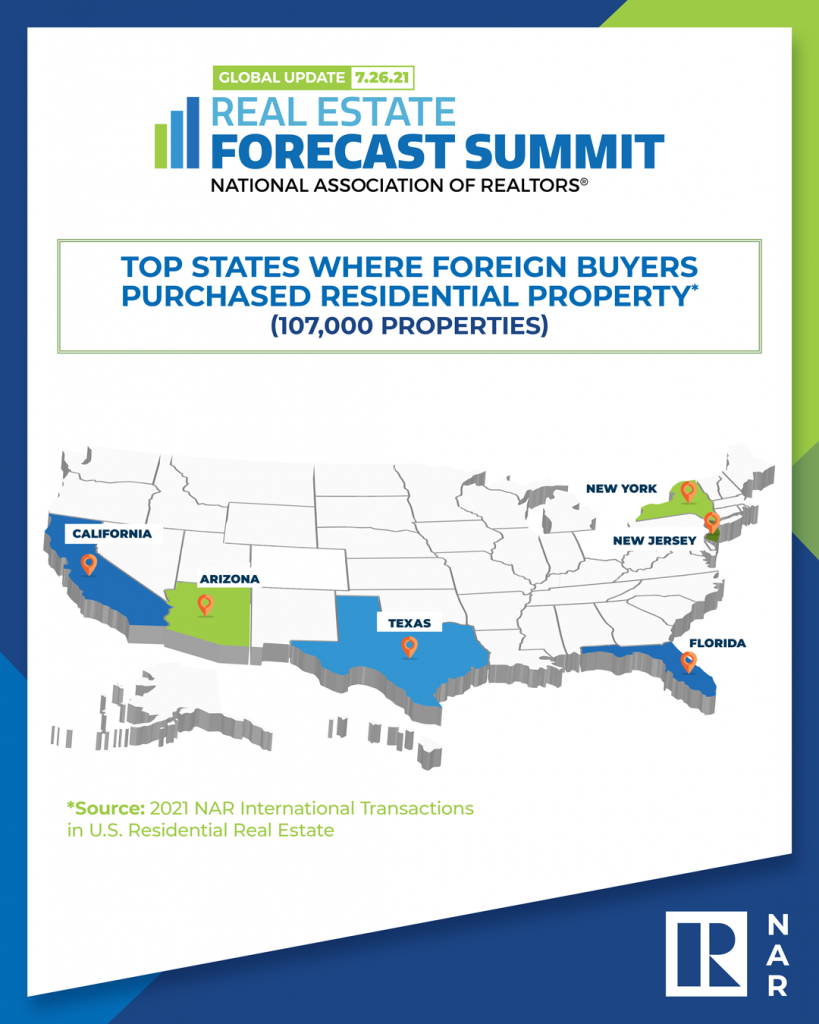 Foreigners are buying fewer American homes, according to a report from the National Association of Realtors last week.

The number of residential properties purchased by international buyers plunged 31% in the 12-month period between April 2020 and March 2021, the data showed. The total value was $54.4 billion for 107,000 residences, a 27% year-over-year drop.

While the drop can in part be explained by the restrictions imposed due to COVID-19, the NAR noted that it was the fourth successive year in which foreign home purchases declined.

Indeed, both the dollar and sales volume were at their lowest level since 2011, when foreigners spent just $66.4 billion on 210,800 homes in the U.S., NAR Chief Economist Lawrence Yun explained.

“The big decline in foreign purchases of homes in the U.S. in the past year is no surprise, given the pandemic-induced lockdowns and international travel restrictions,” Yun said.

The COVID-19 pandemic initially bought residential real estate transactions in the U.S. screeching to a halt, with existing-home sales falling to a seasonally adjusted annual rate of just 4.01 million in May 2020. But the market quickly recovered as people took to using virtual tours and digital tools to enable home viewings and transactions, and sales hit a peak of 6.73 million by October, the NAR said.

The report added that U.S. home purchases by international buyers began falling in 2018. That was due to a decline in activity from Chinese buyers, whose home purchases fell 56% in the period from April 2018 to March 2019. Home purchases by British fell 48% that same year, the NAR noted. It caused the total dollar volume of foreign home purchases to fall by 36% in mid-2019 to $77.9 billion.

International residential home purchases have fallen ever since. Interestingly though, the NAR’s report indicates the decline is not just due to the difficulty foreigners have visiting the U.S. due to COVID-19 restrictions. Foreign buyers who already resided in the U.S. as recent immigrants and those with visas that allow them to live in the country bought $32.4 billion worth of existing homes, down 21% from a year ago. That represented around 60% of the total dollar volume of all homes bought by non-U.S. citizens.

Foreign buyers who lived abroad purchased $22 billion worth of existing homes in the U.S. in the last year, down 33% from the year before. That accounted for the other 40% of dollar volume. In total, international buyers accounted for just 2.8% of all existing-home sales during the period.

The report showed foreign home buyers are at least paying a slight premium compared to Americans. The median existing-home sales price among foreign buyers was $351,800, which is 15% more than the median price paid by Americans.

The majority of foreign buyers seem attracted to the sea and sunshine, with Florida remaining the top destination for the 13th straight year. The Sunshine State accounted for 21% of all international home purchases, with California coming second with 16%, Texas in third with 9%, Arizona fourth with 5% and New Jersey and New York tied for fifth with 4%.

Looking at where foreign buyers come from, the number one source remains China. Chinese buyers contributed $4.5 billion to the total sales volume, ahead of Canadians who accounted for $4.2 billion. Indians ($3.1 billion), Mexicans ($2.9 billion) and Brits ($2.7 billion) rounded out the top five. The report notes that the U.K. was in fact the only country in the top five where buyers actually increased their dollar volume of home purchases, rising from $1.4 billion to $2.7 billion during the period. 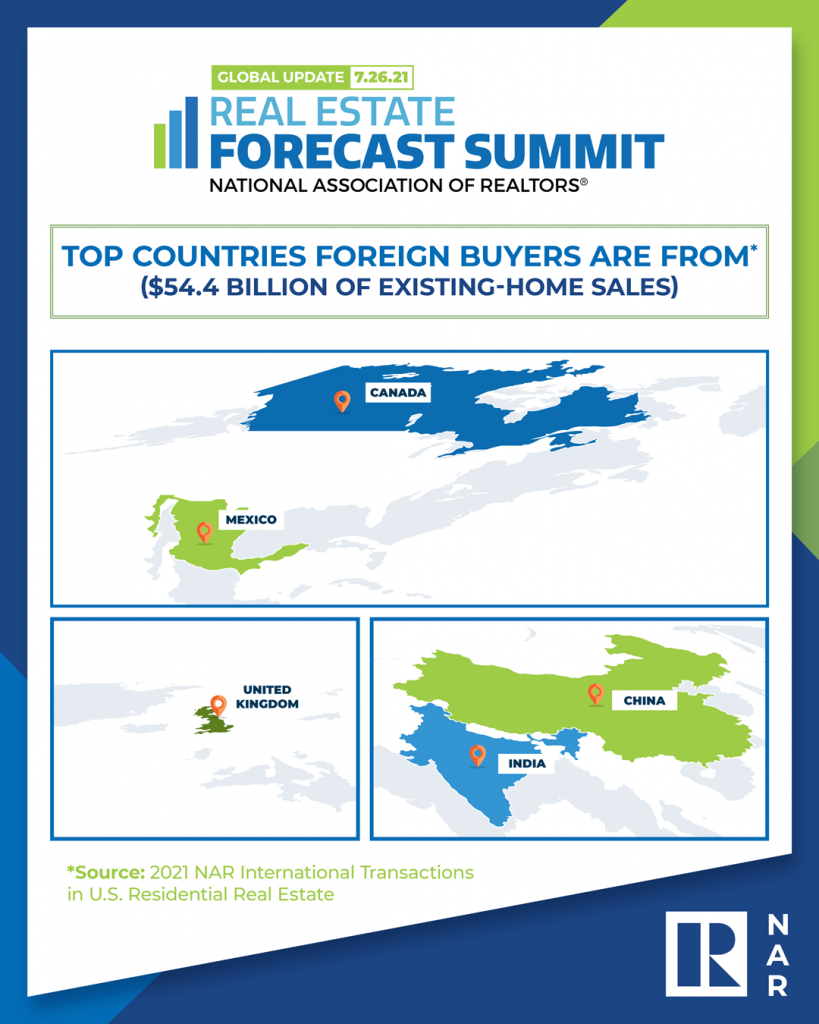 The annual dollar volume for buyers from China, Canada and Mexico dropped by more than 50% in each case. Chinese buyers for example, had spent a whopping $11.5 billion on U.S. existing-homes during the period from April 2019 to March 2020.

The Chinese were still paying the highest prices though, with a median purchase price of $476,500, the report found.

Looking at the types of homes foreigners bought, the report noted that 65% were detached single-family homes or townhouses. Some 49% of homes bought by foreigners were in the suburbs, while 28% were in urban areas. Just 7% of foreign home buys were in resort areas, the report found.

The NAR warned that foreign home purchase numbers may well stay low in the next year if COVID-19 cases in the U.S. remain elevated.

As fans anxiously awaited the release of the season finale of the Netflix thriller “Stranger Things,” the network went down for a brief period on … END_OF_DOCUMENT_TOKEN_TO_BE_REPLACED

If you know of local business openings or closings, please notify us here.PREVIOUS OPENINGS AND CLOSINGS· Air Products and Chemicals Inc.'s chosen … END_OF_DOCUMENT_TOKEN_TO_BE_REPLACED