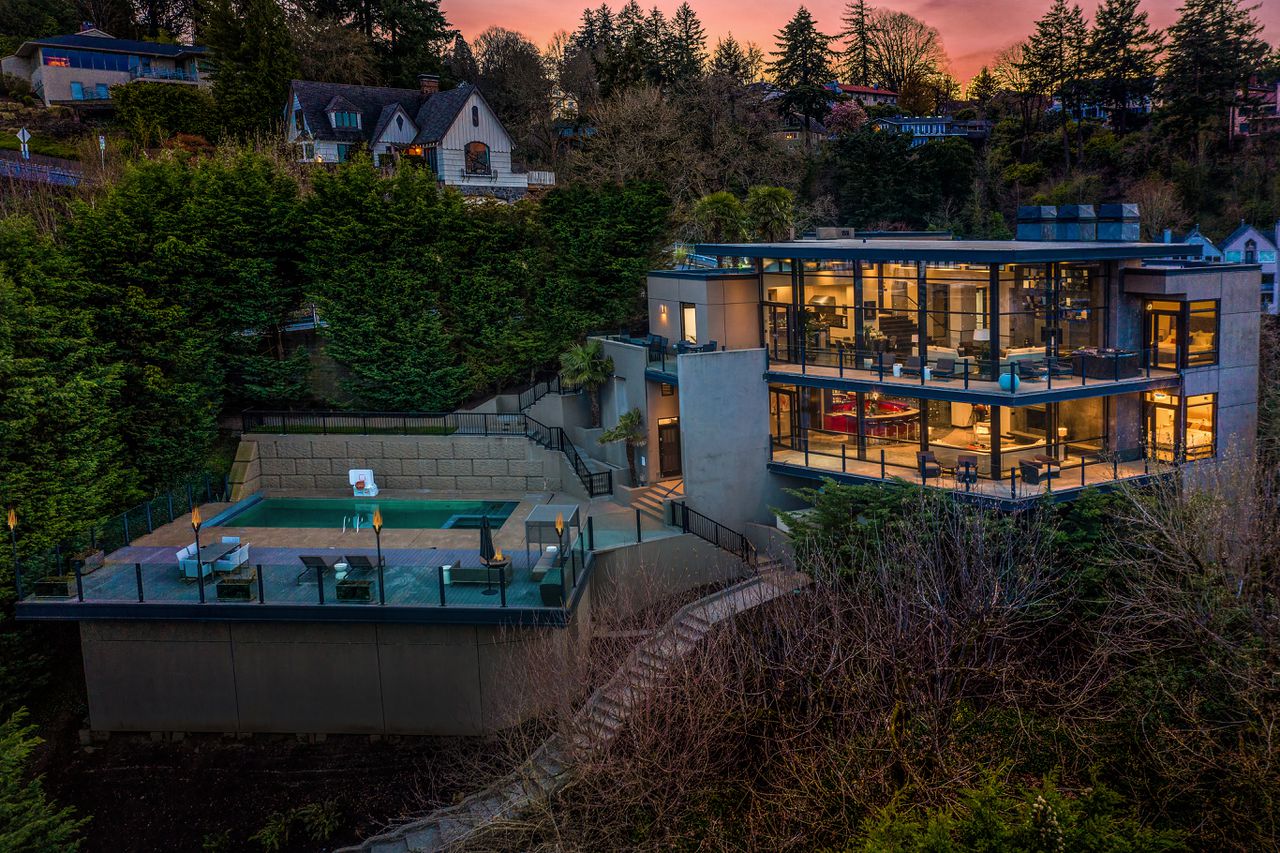 It was a well-known secret that former Portland Trail Blazers guard Evan Turner, now a Boston Celtics assistant coach, lived in a hilltop Portland mansion with stellar skyline views and swanky perks like a mirrored gym and glass wine cellar.

He bought the resort-like property in 2016; a year later, a truck hauling dirt down Turner’s steep neighborhood street tumbled down an embankment and into the athlete’s famous over-the-top swimming pool, producing some amazing photos.

The latest news? The gated, 0.67-acre property at 1551 S.W. Upper Hall St. in Portland’s Goose Hollow Foothills was put up for sale at $3.2 million on April 9 and seven days later Turner accepted an offer.

The agreed-upon price hasn’t been disclosed by listing agent Terry Sprague of Luxe Christie’s International Real Estate, but what’s known is Turner updated the decor of the contemporary, three-level dwelling.

Previous owners had a dark shag rug over the hardwood floors, a cowhide ottoman and even, at one point, a suit of armor standing guard in the living room. Now, crisp white walls, cool chandeliers and cable stair railings draw some attention away from the dramatic floor-to-ceiling windows.

There’s fun interspersed with the sophisticated finishes. A drawing of ET — the lovable Extra-Terrestrial not Evan Turner’s initials and nickname — floats above the gym floor. A Trail Blazer red wet bar with a kegerator seats six in the lounge area and there’s a freestanding popcorn machine in the home theater with blackout shades and rows of recliners.

The 19-foot-long open kitchen is outfitted with a wine cooler and other stainless-steel appliances. The private patio off of the master suite has a hot tub.

The new owner can park a car near the street-level rooftop and enjoy the long walk down the tiered property to the finished daylight basement and fully-lighted sports court.

Turner came to Portland in 2016 when he was signed to a four-year, $70 million free agent contract by President of Basketball Operations Neil Olshey.

The move was designed to bring versatility and take ball-handling pressure off of backcourt stars Damian Lillard and CJ McCollum, but Turner was routinely criticized by Trail Blazers fans for failing to live up to his lucrative deal.

Despite that, Turner was a beloved teammate and respected veteran during his three-year stint in Portland. Turner averaged just 8.0 points, 3.8 rebounds and 3.0 assists in 217 games with the Blazers, but before he was traded, he had maybe his most important moment with the team when they needed him most.

Turner was the difference in Portland’s Game 7 win over the Denver Nuggets, a victory that sent the Blazers to the NBA’s Western Conference Finals in 2019, a performance that many Blazers fans agreed was worth every penny of his rich deal as it contributed to the organization’s deepest playoff run in 20 years.

After he was traded to the Atlanta Hawks in 2019, Turner called the Trail Blazers a first class organization and thanked fans for his time in Portland.

“PDX, it’s been real. I enjoyed the journey, team accomplishments, and vibe of the [Pacific Northwest],” he said.

The UK tech community has reacted with an outpouring of shock and sadness upon learning that Tech Nation, the entrepreneur network that has supported … END_OF_DOCUMENT_TOKEN_TO_BE_REPLACED

© APFedEx will cut more than 10 per cent of its global leadership team, adding to the more than 12,000 employees it has shed over the past seven … END_OF_DOCUMENT_TOKEN_TO_BE_REPLACED

The Westfield Town Council voted 7-1 on Tuesday to introduce an ordinance that allows for a downtown redevelopment plan to move forward.It will next … END_OF_DOCUMENT_TOKEN_TO_BE_REPLACED