Earlier this week, General Motors very healthy Q1 2021 earnings. The results were headlined by $3 billion in income on $32.5 billion in revenue. A good chunk of those earnings came from The General’s captive finance arm, GM Financial, and it’s worth taking a closer look at the division’s performance.

Overall, GM Financial posted $1.2 billion Earnings Before Taxes (EBT)-adjusted, which represents a 27.3 percent Return on Average Tangible Common Equity. That is a significant improvement over the $0.2 billion in EBT-adjusted and 14.3 percent return in the year-ago quarter. GMF finished the first quarter of 2021 with $29.2 billion in liquidity on 7.94x leverage ratio. That compares to $23.9 billion and 9.32x in the year-ago quarter. However, the liquidity figure excludes the $1.0B GM Junior Subordinated Revolving Credit Facility. 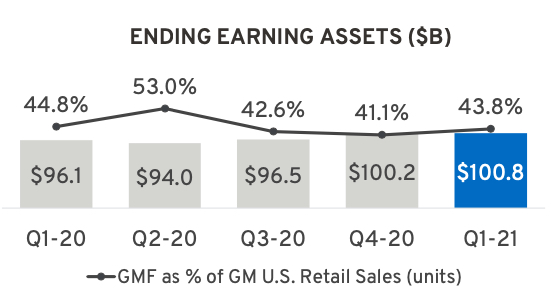 Ending earning assets were $100.8 billion on 43.8 percent of GM U.S. retail sales compared to vs. $96.1 billion and 44.8 percent in the year-ago quarter.  It’s worth noting that the ending earning assets figure includes outstanding loans to dealers that are controlled and consolidated by GM in connection with its commercial lending program and direct-finance leases from other GM subsidiaries.

Another note of interest is that used vehicle prices increased around 11 percent year-over-year as availability of new vehicles continues to be negatively impacted by the ongoing microchip shortage.

We will continue our obsessive coverage of all things General Motors, and invite you to subscribe to GM Authority for more GM financial news, GM business news, and around-the-clock GM news coverage.

Ray Al-Malt spent much of his Tuesday in Orlando, Florida, preparing for rain and high-speed winds. Ray … END_OF_DOCUMENT_TOKEN_TO_BE_REPLACED

Hello again everybody and welcome to our live blog with all of the latest financial news coming out of the United States this Saturday, October 1. Our … END_OF_DOCUMENT_TOKEN_TO_BE_REPLACED