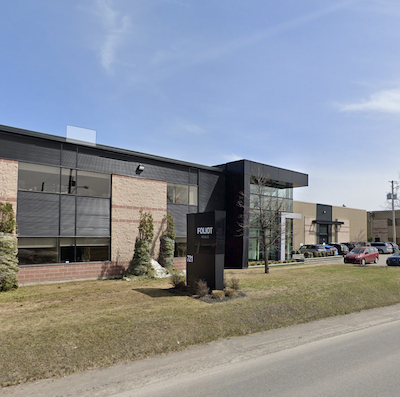 721 Roland-Godard Blvd., in Greater Montreal is one of the recent industrial acquisitions by Groupe Quint. (Google Maps)

Groupe Quint has recently purchased and is about to close on more than 900,000 square feet of industrial real estate in several buildings in the Montreal area.

The rapidly expanding Montreal-based real estate company has also established a foothold in the Detroit area and plans to expand its presence there and elsewhere in the U.S.

The largest acquisition in the Montreal area is the nearly-250,000-square-foot headquarters of hotel and student housing furniture manufacturer Foliot Furniture, for which Quint paid $30 million. The identity of the seller was not released.

It’s at 721 Roland-Godard Blvd. in Saint-Jérôme off Highway 15, 35 miles north of Montreal.

Foliot Furniture, which has 15 years remaining on its lease, is the sole tenant. The property was built in several phases from the early 1990s to the early 2000s and is in very good condition, said Simon Yeramian, vice-president of investments at Groupe Quint, in an interview with RENX.

“Seeing how crazy the industrial market has become, we just feel it was a good opportunity even though it’s not the typical kind of opportunity we like to buy,” Yeramian said. “Usually we like to buy properties where we can create a lot of value,” which means either buying vacant properties or buildings with below-market rents that can be renovated.

“It’s just a long-term investment for us,” he added. “We feel like we’re getting it at a good price. We got a good deal and it’s going to be a good return on the investment.”

Given that the Saint-Jérôme property has a long-term lease, “there’s not much we can do in the foreseeable future to increase the value, so it’s more of a cash-flow and return-on-investment kind of play.”

The price and seller were not divulged.

Lisi Aerospace remains as the long-term tenant of the three Place Trans-Canadienne buildings, which were built in the early 1990s. “They’re in great shape,” Yeramian said of the buildings. “We feel that we’re getting them at a good price per square foot which is usually what we look for.”

Built in the late 1960s, 1710 Trans-Canadienne, which has 24-foot ceiling clearance, is leased to a transport company. The building is in a great location and has been well- maintained, but will require some work in the next few years.

Yeramian said land currently used for trailer storage could be used to expand the building by up to 40,000 square feet.

“We’re getting them at a good price,” Yeramian says of the four buildings. “We feel like in the next years they’re going to appreciate a lot in value.”

Quint is also about to acquire as a long-term investment a 169,500-square-foot industrial building built in 1964 at 2000 Industriel Blvd. in Chambly on the South Shore of Montreal. Again, Quint did not revel the identity of the vendor, nor the price.

While Quint was in due diligence, it signed a lease with tire distributor Distribution Stox for the entire building which has a mix of 24- and 12-foot clear heights.

Quint will also spend $17.5 million at the end of June to buy, from a private real estate company, a 155,000-square-foot industrial building in Saint-Laurent. The address cannot yet be disclosed.

Built in 1974, the building is almost fully leased to over 20 tenants and some of the larger tenants have long-term leases. The building requires a lot of renovations, which will be done in the next few years. “We’re capitalizing on the location for long-term rental increases,” Yeramian said.

Quint spent $2 million a few months ago to acquire 131 Hymus Blvd., a 26,000-square-foot class-B industrial building in Pointe-Claire built in 1962. The building will be a long-term hold.

It has been vacant for a few years and requires extensive renovations. Given the 16-foot clearance in the warehouse section, the building would be ideal for everybody from small manufacturers or distributors to cannabis growers or crypto miners.

“We’re looking for market rents which at the moment are around $9 net for this kind of building,” he explained. “Given the location, there have been several inquiries from tenants. There’s really not much available of this size and for a lot of people it’s the right size that they need.”

Quint is also about to close on a 30,000-square-foot building with 24-foot clearance in the Parc industriel Pilon in South Shore Longueuil. It requires significant renovations and Quint will be looking for a tenant to take the entire building.

A few months ago, Quint spent $2.6 million to acquire 2865 Botham St. in Saint-Laurent, a class-B, 20,000-square-foot, multi-tenant industrial building that needs upgrades. It was previously held by a private owner.

“We feel like there’s a great potential to increase the value in the short term.”

Yeramian said the acquisitions have come about via on- or off-market deals through brokers, or by approaching owners directly.

“Since we’ve been very active lately, more and more people have us in mind when it comes to looking for a buyer, so if a broker hears of a building that might be for sale, we’ll definitely be at the top of their mind as a potential buyer.”

Quint has also acquired for $11.1 million a five-storey, 190,000-square-foot class-A office building in the Detroit suburb of Southfield.

Built in 1974, the property at 25,200 Telegraph Road is “a great-looking property in a good sub-market. We believe in the future of suburban office.”

Quint acquired the property from a group of Michigan investors after another buyer backed out when COVID-19 hit. It was about 32 per cent vacant when acquired and Quint plans a few million dollars of interior renovations.

Yeramian said Quint aims to expand its presence in the Detroit market and is finalizing a deal in the area to buy more than a million square feet of industrial buildings.

The company is also actively looking for deals in the Memphis market, where it already has a 260,000-square-foot, class-B industrial building 18 miles away in Olive Branch, Miss.

The next wave of successful start-ups will be those that help make the transition to a carbon-free energy affordable, said BlackRock CEO Larry Fink in … END_OF_DOCUMENT_TOKEN_TO_BE_REPLACED

Former Bank of England governor Mervyn King poured cold water on the merits on a central bank digital currency in the UK. From privacy concern to the … END_OF_DOCUMENT_TOKEN_TO_BE_REPLACED

A Dallas urban housing developer is headed to Northeast Dallas for its next project.Larkspur Capital is planning a rental home community near the Casa … END_OF_DOCUMENT_TOKEN_TO_BE_REPLACED