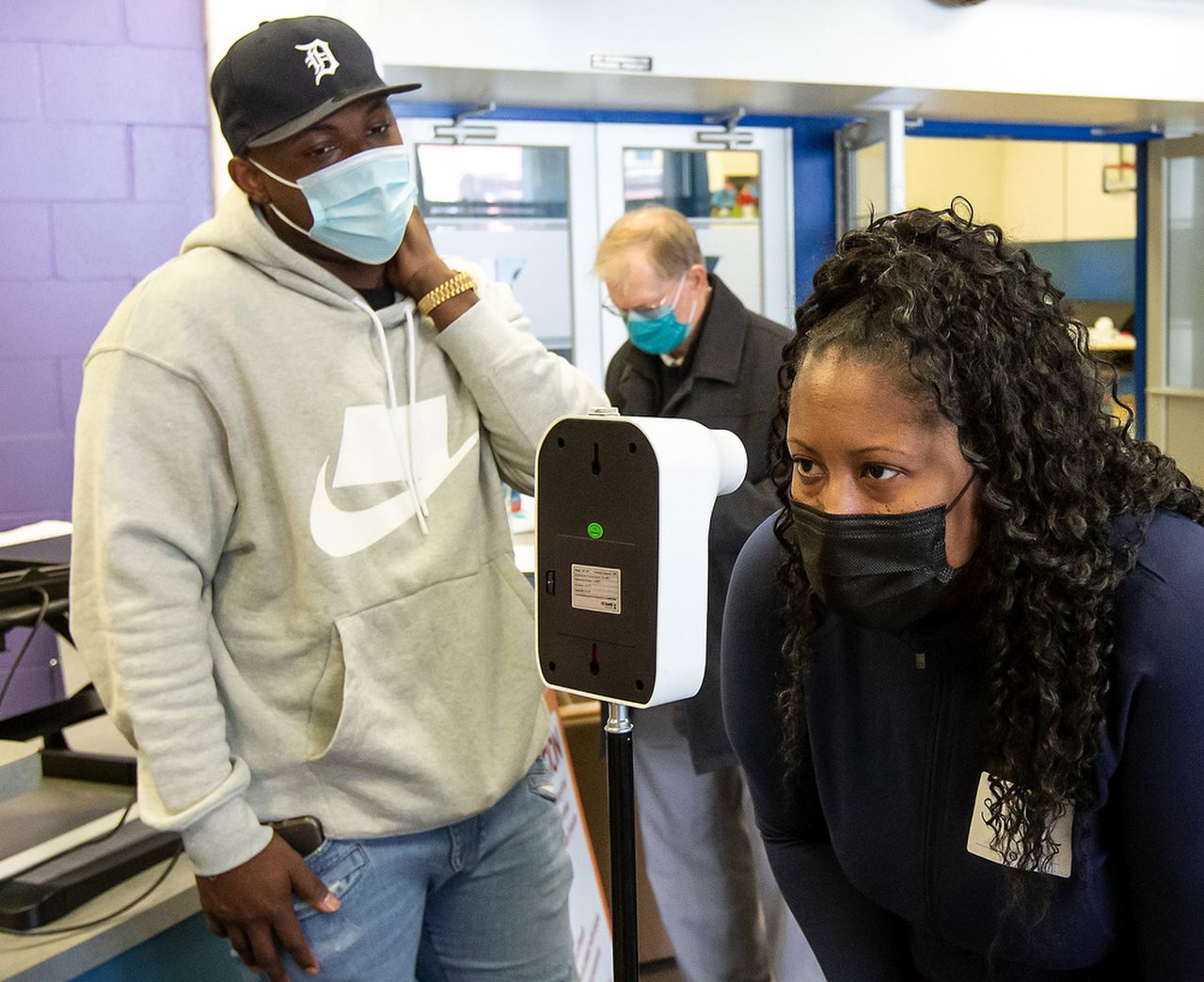 LeSean McCoy likes to make the most of his visits to Harrisburg.

So on Saturday, the NFL football player who most recently played for the Tampa Bay Buccaneers, made a surprise stop at a COVID-19 vaccine clinic held at Camp Curtain YMCA in Harrisburg and hosted by his foundation, Shades of Greatness.

“I like to be hands-on when I’m in my hometown,” McCoy said.

The clinic, held in partnership with the Hershey Pharmacy & Gift Shop, is providing more than 400 second doses of the vaccine to eligible residents until 3 p.m. today.

Rose Cartnail, of Harrisburg, stood in line outside of the YMCA waiting for her second vaccine and said the clinic made it easy. She said she had struggled to find an appointment at three different places.

“When I heard about this, that same day I called and made an appointment,” Cartnail said.

In between assisting with temperature checks at the clinic, McCoy chatted with attendees and the media. The former Bishop McDevitt standout, 32, emphasized he wants people to be safe.

“Second, of all I think a lot of the younger crowd were getting the COVID and bringing it home to their older parents, grandparents,” he said.

He said he’s hoping to influence those in their twenties and thirties to come out and get a vaccinated.

“They think they are invincible,” McCoy said, adding he has been fully vaccinated.

Recently, McCoy has been dipping into real estate with an emphasis on creating affordable housing in Harrisburg, Philadelphia and New Jersey. In the beginning, he said he wanted to own properties, but when he learned more about it, the interest shifted to affordable housing.

“I grew up in some neighborhoods that weren’t the best. They weren’t really that nice and I want to change that. I want to be a landlord who cares,” he said.

Along with his brother, LeRon, and business partner, Ryan Sanders, McCoy and his company, Vice Capital, are transforming the Jackson Hotel in Harrisburg into apartments, and have plans to develop the block.

When developers come in to urban areas that weren’t good and fix them up, McCoy said it makes the community safer and creates job opportunities.

McCoy also took time to address Harrisburg’s big sports news, the drafting of Harrisburg’s Micah Parsons to the Dallas Cowboys. The former All-American linebacker at Penn State was the NFL’s No. 12 pick.

“You know what is so crazy? McCoy said “I was the guy that went to the NFL from Harrisburg. So now it’s like fast forward. Like watching someone else from my hometown go on a big stage, that was like amazing.”

McCoy first played for the Philadelphia Eagles, then headed to Buffalo to be with the Bills and also played in Kansas City. He said never met Parsons and but has followed his career and described him as a “hell of a player.”

“He can make a big name for himself, he can make a lot of money and he can be a household name. I’m proud to say he’s from here,” McCoy said.

As far as advice for Parsons, McCoy said he plans to get in touch with him.

“I think this game, it can be tough. I want to try and talk to him what to do to stay there, try and stay focused. You will get pulled from so many people – friends, family. Football can become the last thing on the list,” he said.

The UK tech community has reacted with an outpouring of shock and sadness upon learning that Tech Nation, the entrepreneur network that has supported … END_OF_DOCUMENT_TOKEN_TO_BE_REPLACED

© APFedEx will cut more than 10 per cent of its global leadership team, adding to the more than 12,000 employees it has shed over the past seven … END_OF_DOCUMENT_TOKEN_TO_BE_REPLACED

The Westfield Town Council voted 7-1 on Tuesday to introduce an ordinance that allows for a downtown redevelopment plan to move forward.It will next … END_OF_DOCUMENT_TOKEN_TO_BE_REPLACED