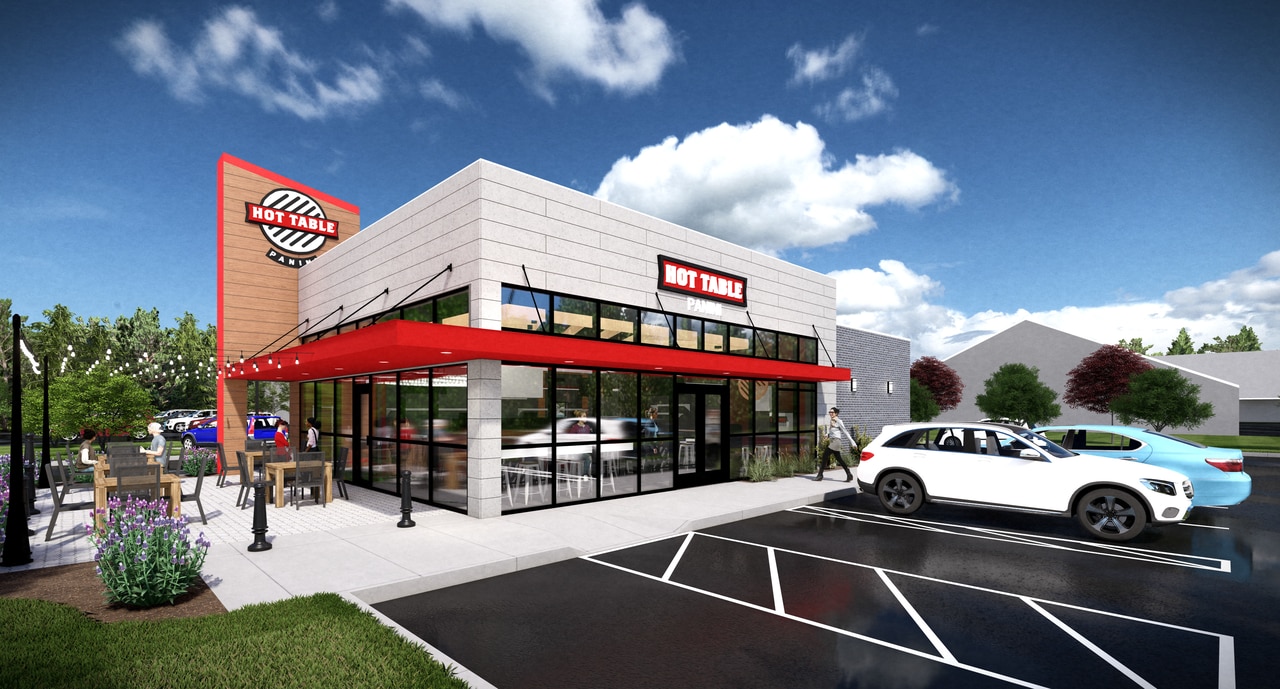 CHICOPEE — Owners of a popular Springfield-based restaurant are planning to build the first free-standing Hot Table, complete with a pick-up window, on Memorial Drive.

John DeVoie, who owns the fast-casual eatery with his brother Christopher DeVoie and investor Rich Calcosola, is hoping to build an about 2,000 square-foot restaurant on Memorial Drive on a vacant lot to the right of the Aldi Supermarket.

They will appear before the Planning Board for a preliminary site plan review Thursday night. He said the property is zoned for business and has adequate parking, so he does not expect serious problems with the proposal.

“That area on Memorial Drive was always on our radar and a piece of real estate became available,” he said, adding the amount of traffic generated by other businesses on Memorial Drive made Chicopee attractive and some customers urged him to expand there.

Hot Table, which specializes in paninis, soup and salads, was founded in 2007 in the Breckwood Shops in Springfield. About two years later it opened a restaurant in the Tower Square Mall with an entrance on Main Street in Springfield and later opened its corporate offices on the 23rd floor of the Tower Square office building.

The business now owns seven different restaurants with the others in Enfield, Connecticut; Glastonbury, Connecticut; Hadley, Marlborough and Worcester. It also is planning others in Framingham, Westfield and West Hartford, Connecticut, DeVoie said.

If approved by the city, the owners will invest about $1.5 million into the project and expect to create about 30 jobs, most of them part-time. The business is usually open from 11 a.m. to 9 p.m. on Monday through Saturday, DeVoie said.

“This is the first time we are buying the land and building a building,” DeVoie said. The rest of the businesses are in leased spaces.

One of the things he hopes to include is a pick-up window, since online ordering with pickups and deliveries saved Hot Table financially during the shutdowns and past 15 months of the coronavirus.

The window isn’t a drive-through like fast food because the paninis are not prepared ahead of time. Instead, people order through an online app or by phone and either pick it up or Hot Table works with delivery services such as Uber Eats, Grub Hub and Door Dash, he said.

“We shut down in March and by April my partners and I wondered if we would have a company anymore,” DeVoie said.

All restaurants faced financial upheavals because of the pandemic and Hot Table saw an 80% loss in business. But, owners pivoted and built a robust takeout and delivery system, which started really taking off in the fall, he said.

He joked that he has tried to black out all memories of 2020 and is instead comparing the current business numbers with those of 2019. The numbers are actually higher than pre-COVID totals, and that is with Springfield office buildings still half-empty, which contribute to the lunch business.

One of the things they found worked well is the “shelf service.” Essentially people would order and pay online and the food was cooked, packed up and placed on a pickup shelf. All customers had to do was run in, grab their order from the organized shelf and leave.

“It works great and people love it,” DeVoie said.

Hot Table is seeing some slow return to in-person dining as the number of people vaccinated increases and the infection rate is slowly declining statewide.

The design also includes an area for outdoor dining, that became popular last spring and summer when scientists agreed there was less possibility for transmission of the coronavirus outside.

The UK’s antitrust watchdog started a new investigation of Alphabet Inc.’s Google, over suspicions it may have abused its dominant position across its … END_OF_DOCUMENT_TOKEN_TO_BE_REPLACED

This is the daily notebook of Mike Santoli, CNBC's senior markets commentator, with ideas about trends, stocks and market statistics. Dip-buyers have … END_OF_DOCUMENT_TOKEN_TO_BE_REPLACED

New York Tech has launched a new integrated marketing campaign, appearing on Long Island and in New York City. The “A Place for You” campaign includes … END_OF_DOCUMENT_TOKEN_TO_BE_REPLACED