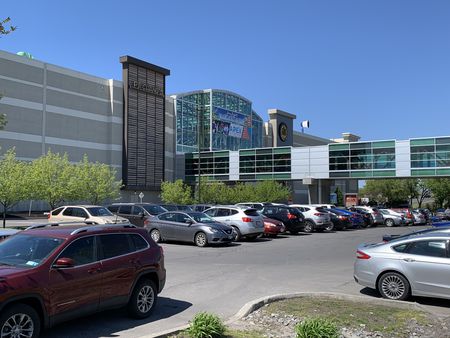 Syracuse, N.Y. – The owners of Destiny USA are looking for a way out of their hole of debt and declining business.

Pyramid Management notified Syracuse government leaders recently that it has hired counsel to explore restructuring the debt on the huge shopping mall.

Destiny, the largest mall in New York and the sixth biggest in the U.S., owes $715 million to lenders. That’s 3.5 times the mall’s most recent appraised value of $203 million.

Pyramid has struggled to make its debt payments after shutting down for four months last year because of the coronavirus shutdown, losing several of its anchor stores and seeing its occupancy rate plunge to 62%.

A solution could involve convincing the lenders to forgive a lot of the debt, a move that might seem unlikely but is not unheard of. Other options involve bringing in more investors or owners, but those seem less promising. There’s always bankruptcy court.

Pyramid could take the lead on the solution or be forced to do something if it cannot make its payments.

The company declined to comment on its plans, but experts say here’s how things could wind up for Destiny.

Pyramid owes $285 million to the holders of municipal bonds issued by the Syracuse Industrial Development Agency to finance a big expansion of the mall that started in 2007. It also owes $430 million on two mortgage loans on the giant center.

If the company defaults on any of its payments, its lenders could foreclose on the mall and try to seize the property.

Mall foreclosures have been happening more often since the pandemic.

Up to 17% of U.S. malls may no longer be “viable as shopping centers” and should be redeveloped for other uses, according to the report “The Long-Awaited Reckoning for Retail” by Barclays Capital. It said one-third of loans on malls are in default.

Triple Five, a Canadian company, recently defaulted on a $1.2 billion construction loan on its American Dream mall in East Rutherford, New Jersey, and had to give 49% stakes in two of its other malls, the Mall of America in Minnesota and the West Edmonton Mall in Canada, to its lenders. The company had used the those malls as collateral for the loan.

Destiny’s lenders will have to figure out if they want ownership of a mall that’s worth much less than they are owed. They also would have to operate it until they could sell it. That is not inviting.

“They might not want to own a mall, or they may not have the infrastructure to manage the mall,” said Erasmo Giamona, a professor of finance and real estate at Syracuse University.

One other major problem: Lenders would have no guarantee they could find a buyer for their mall.

Deutsche Bank recently foreclosed on the Town Center at Cobb mall outside of Atlanta from Simon Property Group. But the bank received no bids when it tried to auction the property in February.

The Canyon section of Destiny USA in Syracuse.Rick Moriarty | rmoriarty@syracuse.com

Lenders could forgive a certain amount of debt on the mall.

The lenders could wind up taking a substantial haircut in this strategy. But the holders of this kind of debt are institutional investors such as large mutual funds and pension funds, the type of investors with diversified portfolios built to take hits and keep on going.

Such an arrangement would likely require Pyramid to put up more money of its own to reduce the principal on the loans. Or, Pyramid might be required to give up part ownership.

Such a deal would recognize the obvious trouble the business is in but give Pyramid time to revive the mall.

Burt P. Flickinger III, managing director of Strategic Resource Group, said he expects crowds to return to malls in the second half of 2021 as vaccinated shoppers feel more comfortable venturing out.

“So it’s in everybody’s interest to maintain a stake,” he said of Destiny.

And since Pyramid would continue to own the mall, lenders would avoid having to step in and operate it.

“Nobody wants to own these right now,” said Gwen Roush, an analyst and senior vice president at DBRS Morningstar. “So if you have an owner who wants to continue to own and operate it, the lenders are almost compelled to work out a deal.”

Pyramid has pulled this off before.

In 2011, Citigroup agreed to forgive $186 million in debt owed by the company Pyramid founder Robert Congel. A condition: Congel had to help the bank escape the project by finding another lender to refinance $310 million in other loans Citigroup had made to the mall developer. Congel borrowed the $310 million from J.P. Morgan Chase, a debt Pyramid is now struggling to repay.

This is another option in which lenders would take a loss. If the lenders agreed, Pyramid would pay a reduced amount to completely settle the debt. This is known as a discounted payoff, or DPO.

That’s easy to say, not so easy to implement. Pyramid would have to come up with the money, which would likely have to be at least the appraised value of the mall, $203 million.

For lenders, a discounted payoff is potentially a big loss, but the loss may be less than if they foreclosed on the mall.

Pyramid could find someone willing to buy the mall. The company would get out from under the debt and maybe even continue to manage the mall for the new owners. But the heavy debt and declining revenues make that a challenging sales job for Pyramid.

Pyramid could bring in a new investor, who would put up money to pay off part of the loans in exchange for part ownership.

However, the mall developer might have trouble finding someone to invest in this business now.

Pyramid could file under Chapter 11 of U.S. Bankruptcy Code, seeking protection from creditors while it reorganizes its finances.

In Pyramid’s case, reorganizing could mean obtaining new financing or working out deals with its current lenders. But a Chapter 11 filing could also simply buy it time while shoppers return and the company finds new tenants.

But there’s no guarantee that Destiny will see a return to the glory days after the pandemic ends. A bankruptcy judge could decide Pyramid stands no chance of turning things around and order the mall auctioned off to pay its lenders.

“Who knows what trends are going to be like when people start going back to whatever routines they had?” said Amy Laskey, managing director at Fitch Ratings.

If Pyramid doesn’t like any of these choices, it could simply hand the keys to its lenders and walk away.

It’s happened with other troubled malls around the country.

Since the coronavirus pandemic started, mall owners including Simon, Starwood Capital Group and Brookfield Property Partners have sought to hand the keys of some of their properties to lenders, according to The Real Deal. Brookfield turned over ownership of its North Point Mall in Georgia earlier this year to its lender, the real estate news website reported.

With this approach, both sides avoid the time and expense of a bankruptcy proceeding. Thus, the term “friendly foreclosure.” (When homeowners do this, it’s known as “jingle mail,” a reference to the sound their house keys make in the envelope when mailed back to the bank.)

No one knows how this will shake out. Even Pyramid may not, because it’s not entirely up to the company.

But a deal in which lenders forgive a certain amount of debt and Pyramid puts up cash to lower the debt further could be the most likely outcome.

What is known for sure is that the company is seeking a break from its lenders. That’s a strong indication that Pyramid does not plan to just walk away.

Citing sources familiar with the matter, the Wall Street Journal reported that one of the advisers Pyramid has hired is Houlihan Lokey, a global investment bank with expertise in mergers and acquisitions, capital markets, financial restructurings and valuation.

According to Bloomberg, Houlihan has advised on 12 of the largest 15 corporate debt restructurings since the turn of the century, including Enron Corp. and Lehman Brothers Holdings. If Pyramid were planning to walk away, why would it bother hiring Houlihan?

For bondholders, striking an out-of-court deal with Pyramid could minimize their losses. For Pyramid, it could mean an escape from crushing debt and more time to turn around the mall’s fortunes.

It also would mean the Congel family gets to retain ownership of a property that was their patriarch’s pride and joy. Congel, who died in February at the age of 85, opened the mall as the Carousel Center on the site of a former scrapyard on the south shore of Onondaga Lake in 1990. He built 15 malls, but Destiny is the only one he built in his hometown.

And for both sides, a restructuring of Pyramid’s debt load would avoid the uncertainty of bankruptcy.

“I think they would probably both try to do it out of court,” Giambona said. “They all know that if you go to court, it becomes kind of a tricky game.”

Destiny USA retailer to close as store shutdowns speed up

A prototype, all-electric airplane took its first flight Tuesday morning in central Washington state. The Seattle Times reports that if the Federal … END_OF_DOCUMENT_TOKEN_TO_BE_REPLACED

Even with the market seemingly finding new depths each day, now is probably not a good time to bet on the Federal Reserve to ride in and save the day … END_OF_DOCUMENT_TOKEN_TO_BE_REPLACED

WASHINGTON (AP) — Democratic Sen. Joe Manchin has abandoned, for now, his push to speed up the permitting process for energy projects, easing the … END_OF_DOCUMENT_TOKEN_TO_BE_REPLACED