The MSCI EMU index of shares in eurozone companies has jumped almost 13 per cent since the end of last year in US dollar terms, exceeding a similar gauge of global developed market equities by around two percentage points.

The gains so far in 2021 have propelled the MSCI EMU index, which captures the price returns foreign investors receive from holding eurozone stocks, to the highest level since June 2008. Its outperformance this year comes after the index has lagged behind global stocks since the bloc’s debt crises threatened to unravel the currency union a decade ago.

Investors are increasingly optimistic, encouraged as the eurozone emerges from a double-dip recession caused by the pandemic and member states roll out coronavirus vaccines after a delayed start blamed on supply shortages and patchy public health campaigns.

“This is Europe’s chance to actually take off,” said Agnès Belaisch, strategist at fund manager Barings. “And this is not completely priced in to stock markets.”

Around 65 per cent of respondents in a recent Bank of America survey of European fund managers said they do not expect European equities to peak until the fourth quarter of this year at the earliest.

“Europe has been overlooked for very many years,” said Bastien Drut, strategist at fund manager CPR. “It has not been a darling of markets for such a long time. I think it could catch up now.”

The bullish outlook among many fund managers is built on expectations the eurozone economy will begin rebounding at a more rapid clip in coming months as the recovery from the pandemic accelerates.

Executives across the bloc reported that business activity grew this month at the fastest pace in just over three years, with new orders rising at the swiftest pace since June 2006, according to the IHS Markit purchasing managers’ index released last week.

Earlier in May, the European Commission forecast the eurozone economy will grow 4.3 per cent this year after contracting 6.6 per cent in 2020.

The robust economic growth is expected to feed into corporate earnings. Companies in the broad MSCI Europe index, excluding the UK, are expected to achieve average earnings growth of 41.2 per cent in 2021, compared with 33.3 per cent in the US, according to data collated by FactSet.

The MSCI’s index of eurozone stocks is trading at a cyclically adjusted price-to-earnings ratio of 21 times, according to calculations by asset manager Amundi. For the US, the so-called Cape ratio is 35.3 times.

The Cape ratio — a closely watched measure developed by economist Robert Shiller — compares prices with average earnings for the past decade and can be viewed as a buy or sell signal when it deviates markedly from its long-term average.

“Europe is our favourite region right now,” said Azad Zangana, senior European economist at fund manager Schroders. “The economy is really picking up and valuations are much more attractive than the US at present.”

Some investors are concerned that the European shares have already banked companies’ expected profit gains for the year, however, while others are fearful of sudden changes in US monetary policy that would affect all major global stock markets. 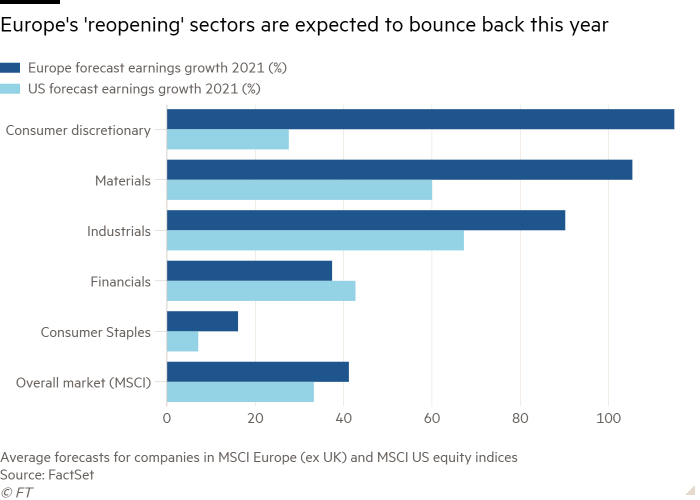 “One worry for us with Europe is it is getting pretty popular and that is always a detractor,” said John Roe, head of multi-asset funds at Legal & General Investment Management. He calculates that “on a sector by sector basis, forward price-to-earnings ratios in Europe are not that dissimilar to the US.”

Zehrid Osmani, manager of Martin Currie’s global portfolio trust, cautioned that investing in Europe is “not as simple as looking at the eurozone economy”. Any rapid move by the Federal Reserve to reduce its $120bn of monthly bond purchases would weigh on Europe as well, he said.

“As far as stock exchanges are concerned you get high degrees of correlation, so if the US falls it is hard to foresee a major decoupling.”

For now, taper worries have been placated as Fed officials have repeatedly insisted they will look through what they view as a transient jump in inflation to keep supporting the US recovery. The European Central Bank has taken a similar view even as price growth is expected to tick up across the bloc.

“When I look at fundamental valuations there is still catch-up room for Europe,” said Kasper Elmgreen, head of equities at Amundi. “But in times of market stress, Europe is not a haven.”

Here are the top seven things you must know about Tech with The Hans India on October 18, 2021. Let's begin...Google's Pixel 6 Series Launch Event – … END_OF_DOCUMENT_TOKEN_TO_BE_REPLACED

Colin Powell, former joint chiefs chairman and secretary of state, has died from Covid-19 complications, his family said on 18 October. He was 84. In … END_OF_DOCUMENT_TOKEN_TO_BE_REPLACED