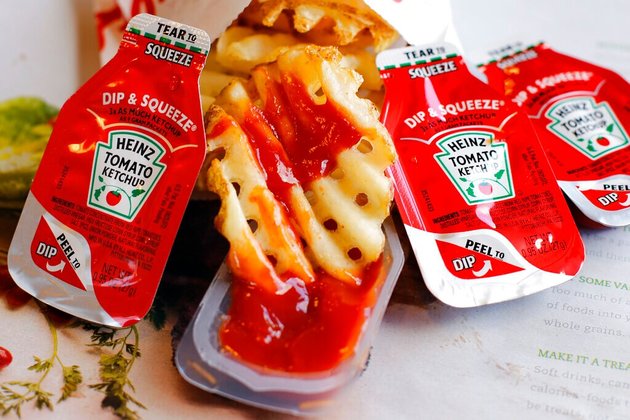 One of the most popular condiments in the U.S. is in short supply thanks to the coronavirus pandemic.

Ketchup sales reportedly were up 300% since the start of the pandemic, causing shortages, particularly of single-serving packets used by fast food chains, the Wall Street Journal reported. Demand for larger bottles of ketchup was up a more modest 15%.

As Americans turned to take-out food over the past year, the demand for ketchup has overwhelmed supply, the newspaper reports.

One company, Kraft Heinz, supplies 70% of the retail ketchup in the U.S, according to the Journal, adding that the company began ramping up production and slimming its product line early in the pandemic.

“The unmatched consumer love for our iconic HEINZ brand, as well as our longstanding partnership with the restaurant industry, are two responsibilities we take very seriously – which was why we made strategic manufacturing investments at the start of the pandemic to keep up with the surge in demand for ketchup packets driven by the accelerated delivery and take-out trends,” wrote Steve Cornell, Kraft Heinz’s president of Enhancers, Specialty and Away from Home Business Unit, in an email to NBC News.

And the company is still trying to keep up with the demand, telling the Journal it would be adding capacity by 25% to produce 12 billion ketchup packets.

The increased demand has led to a price spike of 13%, the newspaper said, causing some restaurants to try other suppliers or put ketchup from larger bottles into smaller containers.

One fast food chain, Long John Silver’s, told the paper it had increased its ketchup spending by $500,000 over the past year because of demand.

At another chain, Texas Roadhouse steakhouse, which said it used 55 million ounces of ketchup in 2020, executives told the newspaper it was seeking other suppliers.

Since the pandemic started a year ago, several products have seen shortages in the U.S., including toilet paper, meat, baking products and even refrigerators.

The Westfield Town Council voted 7-1 on Tuesday to introduce an ordinance that allows for a downtown redevelopment plan to move forward.It will next … END_OF_DOCUMENT_TOKEN_TO_BE_REPLACED

New York CNN  —  Bed Bath and Beyond is closing another 87 stores as the struggling retailer barrels toward bankruptcy. … END_OF_DOCUMENT_TOKEN_TO_BE_REPLACED