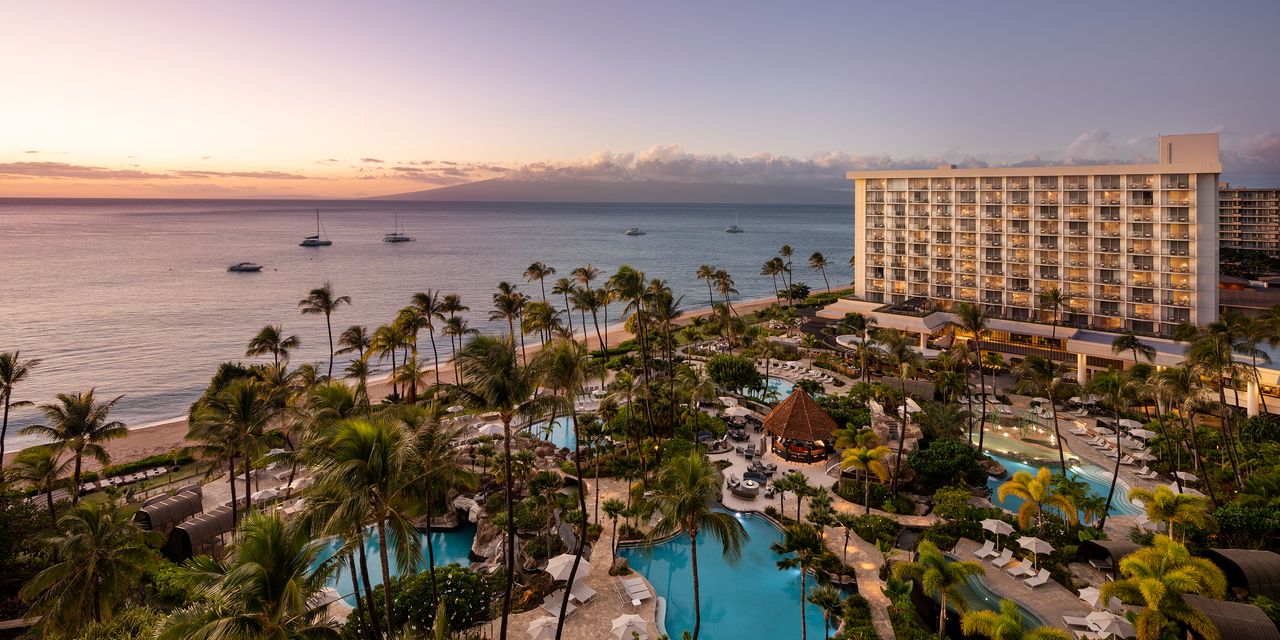 Finding a room at the Westin Maui Resort & Spa may be tougher this summer, as Hawaii eases up on travel restrictions. That’s a tough break for vacationers looking for a luau. But it’s good for the company that owns a $363 million mortgage on the property:

“We’ve done a number of loans in Hawaii, and we’re positive on the fundamentals,” says Katie Keenan, president of Blackstone Mortgage (ticker: BXMT). “As the travel industry recovers, pent-up demand will be very beneficial for Hawaii.”

Commercial real estate is flourishing as demand for investment properties heats up. There are pockets of weakness—notably in retail, offices, and hospitality. But some of the biggest commercial lenders have emerged from the slowdown in strong shape, and with plenty of cash on hand to finance properties, which will boost their revenue—and increase dividend income for investors.

Two of those firms, Blackstone Mortgage and

(KREF), look appealing. While they don’t offer much growth potential, they each yield about 8%, based on annualized payouts of their latest distributions. And as improving commercial real estate trends boost their asset bases, they should be able to maintain or lift their distributions.

One reason to own the mortgage trusts is their ties to two private-equity giants:

(KKR). Blackstone Group is one of the world’s largest private-equity real estate owners, managing $196 billion in assets. KKR oversees $16 billion in real estate assets. The private-equity firms own stakes in the mortgage trusts and oversee them. The parent managers are plugged into deal making, and funnel potential loans to the trusts.

Get a sneak preview of the top stories from the weekend’s Barron’s magazine. Friday evenings ET.

Blackstone Mortgage closed $1.7 billion of new loans in the first quarter, taking its total to $18.7 billion in loan assets. The company aims to grow its asset base to $20 billion with existing capital, including $1.1 billion in cash and available credit.

About half of its portfolio is in office properties, followed by 17% in hotels, and 12% in apartment buildings. It’s making new loans in areas like life sciences and logistics, including a recent $575 million loan for a set of “last mile” logistics and warehouse properties in Sweden.

While the pandemic caused a wave of commercial-loan defaults and late payments, Blackstone is seeing minimal impact; 98% of its loans were performing in the first quarter. Blackstone has considerable exposure to the office market, but it focuses on newer buildings with amenities and flexible layouts, says Keenan, where demand is holding up. “We lend to high-quality borrowers, and we’re very discerning,” she says. Overall, the portfolio’s average loan-to-value ratio is 65%, implying a decent cushion of property value.

Blackstone’s loan portfolio has an average maturity of 3.1 years; then, loans are either refinanced or paid off. The loans have a floating interest rate based on the one-month London interbank offered rate, or Libor, a short-term benchmark, currently at 0.1%. The average yield is Libor plus 3.6%.

A KREF property in Chicago.

Even so, higher short-term rates would be a headwind for Blackstone. They would increase its costs of capital, and interest income wouldn’t rise in tandem because many of its loans have high Libor floors that shield borrowers from rate hikes up to a certain point. Libor would probably have to hit 1.5% for interest rates on Blackstone’s portfolio to adjust upward materially, says BTIG analyst Tim Hayes. Another headwind, he adds, is that competition for investment properties is heating up, given the high level of cash in private equity. “Asset yields on new loans are coming down,” he says. Funding costs have also come down, however, so returns on equity should be in line with prepandemic levels. Blackstone trades at 1.2 times its estimated 2021 book value, a premium valuation that probably limits the upside in its stock.

Hayes recommends the REIT, however, for the company’s healthy credit metrics and dividend coverage. He also likes its lending pipeline, tethered to Blackstone Group, and he estimates that there’s still some upside, expecting its shares to hit $35 over the next 12 months, up from a recent $30.58.

KKR Real Estate is a smaller mortgage trust with a $5.3 billion portfolio. Apartment buildings and offices constitute 85% of its portfolio, with the rest in retail properties and hotels. It’s also a floating-rate lender, with an average yield of 3.4%. And its Libor floor is similar to Blackstone’s, at 1.4%.

KKR Real Estate lends to borrowers who need a short-term loan for an acquisition, refinancing, or remodeling of a property, says CEO Matt Salem. Most of its apartment loans are for new rental constructions; the property acquirers need time to get them fully leased before selling the buildings, and they take out bridge loans for the transition. “That’s a pretty defensive lending profile,” Salem says.

Parent firm KKR also creates a conduit for lending; over the past 12 months, the REIT screened $44 billion in financing opportunities and issued $918 million in loans. The firm says that it has $571 million in liquidity to fund new loans. KKR sold five million shares of the REIT, or a quarter of its ownership stake, this past week, and the stock took a 5% hit on the sale. But it won’t dilute earnings or book value, and it will lift the stock’s liquidity, potentially expanding the investor base to more institutional buyers.

The KKR REIT’s office properties are mainly in cities with healthy demand, including Boston, Philadelphia, Seattle, and Washington, D.C. Loan-to-value ratios for offices average 62%, Salem adds, implying that properties would need to lose nearly 40% of their value before the mortgages would be impaired.

At about $20 a share, KKR Real Estate trades above its estimated book value of $19. That doesn’t imply much upside; indeed, the average analyst target is $21.43. But if the company maintains its latest quarterly distribution of 43 cents a share, investors would reap an 8.6% annualized yield. That would be more than double the 3.7% yield on junk bonds these days.

Assuming that demand for offices, hotels, and apartments holds up, both stocks could be income winners in a low-yield world.

Write to Daren Fonda at daren.fonda@barrons.com

CNBC's Jim Cramer on Wednesday told investors that they should take gloomy economic commentary from bank executives with a grain of salt. "Don't panic … END_OF_DOCUMENT_TOKEN_TO_BE_REPLACED