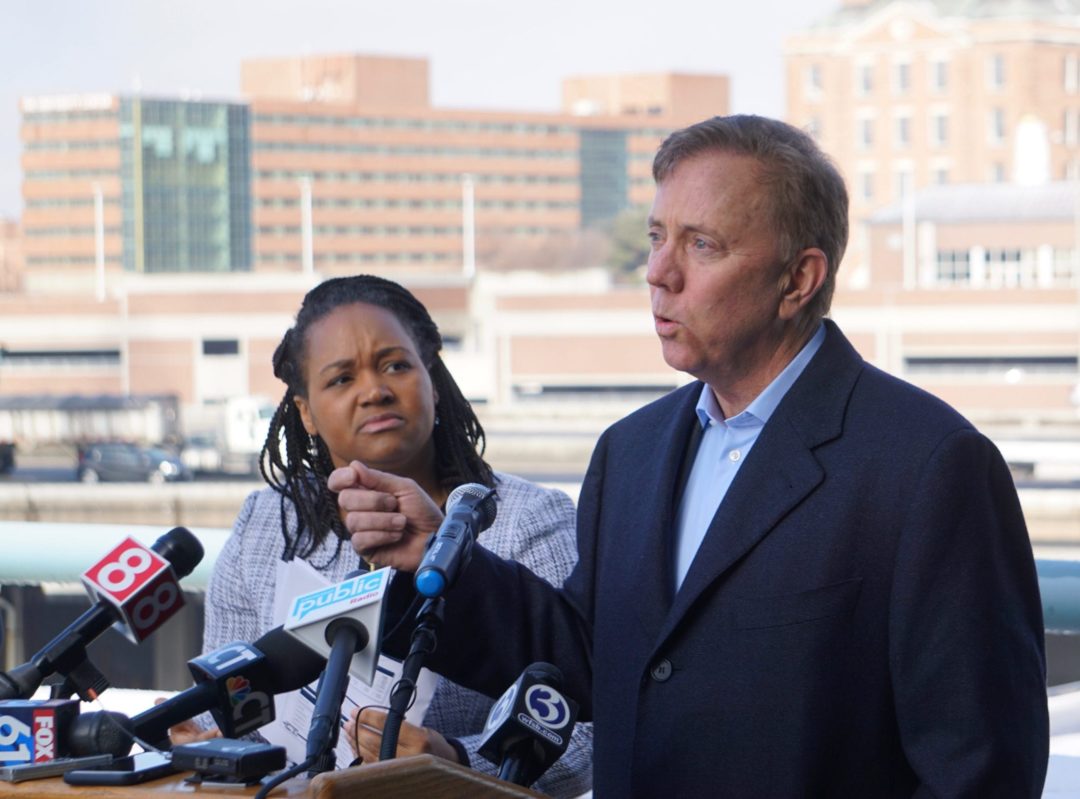 Gov. Ned Lamont centered his plans for Connecticut’s latest round of federal coronavirus relief on jump-starting the economy, helping students recover from a pandemic learning gap, maintaining the battle against COVID-19 — and avoiding any hikes in state taxes.

Lamont would use nearly two-thirds of the $2.6 billion in direct federal relief sent to Connecticut’s coffers to help balance the next biennial state budget without tax increases.

And Lamont also pledged to make equity the linchpin of the entire plan, placing an emphasis on minorities and particularly women of color.

This is “an incredible opportunity for this state to make transformative investments in equity and to emerge healthier and stronger from pre-natal care to end of life, for people and projects, to help everyone who needs it in this state,” wrote Lamont’s budget director Melissa McCaw, the secretary of the Office of Policy and Management.

Congress and President Joe Biden approved more than $6 billion earlier this year for Connecticut through the American Rescue Plan Act, with dollars sent directly to the state, municipalities, local school districts and to colleges and universities.

Lamont’s plan focuses chiefly on the largest subset — almost $2.65 billion that state government can employ with few restrictions, though the funds can’t be used to lower taxes.

The governor would dedicate two-thirds of those funds, $1.75 billion, to help balance the 2021-22 and 2022-23 fiscal years without tax increases. Analysts projected back in February that state finances, unless adjusted, would run $2.5 billion in the red over the next two fiscal years combined.

Other tranches of ARPA funds sent to Connecticut besides the $2.65 billion for direct state fiscal relief include:

Most of those dollars will be spent over the next two fiscal years, though they also can be expanded in the first half of the 2023-24 fiscal year.

The top Republican in the House of Representatives, Minority Leader Vincent J. Candelora of North Branford, said “there are a lot of good things” in the Democratic governor’s proposal, including key investments in mental health and education.

Noting that the Democrat-controlled Finance, Revenue and Bonding Committee last week proposed hundreds of millions of dollars in tax hikes, Candelora said Lamont’s proposal shows Connecticut can climb out of the pandemic without asking more from taxpayers.

The state has one of the largest budget reserves, as a share of its annual operating costs, of any state, and is well-positioned to recover — if it can avoid tax hikes that would harm the economy, Candelora said. “As we march forward, we need to recognize Connecticut has a competitive edge.”

Nonprofit social service agencies would get a $50 million boost

Outside of the dollars reserved to balance the next state budget, Lamont’s plan for the remaining pandemic relief funds is invested in human services.

About $240 million would be spent over the next two fiscal years to maintain a COVID-19 testing program that the administration says has become a national model.

The administration would fund several proposals to expand psychiatric care, including expanding tele-health options for persons struggling with mental health and addiction problems.

And Lamont would use federal funds to send private, nonprofit agencies that deliver the bulk of state-sponsored social services a $50 million boost over the coming biennial budget cycle. But the industry, which has received no major increase in state support for more than a decade, is looking for something long-term.

The Appropriations Committee has endorsed a seven-year plan to close at least $300 million of that cap, starting with $80 million in the next two-year budget.

The administration’s plan also would support the ongoing COVID-19 vaccine rollout while ordering new investments in local departments of health and creating a new division on health equity within the state health department.

A focus on worker retraining and aid to small businesses

The governor’s plan also places a strong emphasis on economic development and worker training, dedicating nearly $350 million in federal funds — and $480 million in state borrowing and tax credits — to those priorities over the coming biennium.

The governor wants to use $50 million of the federal funds effectively as relief to all Connecticut employers. The governor specifically would deposit those dollars in the state’s unemployment trust, which has had to borrow $700 million since the pandemic began to maintain benefits for the jobless.

And that debt, which businesses ultimately must repay, is expected to grow to $1 billion later this year.

Lamont also would use federal dollars to provide small business loans and grants, with the goal of retaining 14,000 jobs — and with half of all relief aimed at businesses owned by minorities, women, disabled and veterans. They also would go toward a new marketing campaign to bolster the pandemic-weakened tourism industry and as well as investments in renewable energy and other cutting-edge technologies.

Expanding child care and getting kids ready to learn

But McCaw said Connecticut’s economy cannot fully recover unless the state invests more in a child care industry that also was hurt badly by the pandemic.

“Families need access to child care in order to return to the workforce,” she said.

Beth Bye, commissioner of the Office of Early Childhood Development, said the administration would spend $120 million to help stabilize a child care industry badly damaged by the pandemic, $50 million to provide child care for women in workforce development programs, and another $26 million in child care subsidies to help make services more affordable for low-income households.

Access to Care4Kids, the state’s child care subsidy program, would be expanded in two years to serve an additional 11,500 children.

Eligibility rules would be modified for families earning up to 65% of the statewide median income to access subsidized care. And any parents enrolled in higher education or job training also would be eligible.

And state-funded Family Resources Centers would provide free summer pre-school classes in 2021 for 3- and 4-year-olds.

Local school districts must dedicate at least 5% of the $1 billion they’ve received toward summer school and other programs to help elementary and high school students reverse the learning loss caused by the pandemic.

Lamont would dedicate another $22 million from the state’s share of federal dollars toward summer programming and $15 million to subsidize free admissions for residents age 18 and younger to Connecticut museums and arts and educational venues from July 1 through Labor Day.

And another $3.5 million would be used to fund scholarships to sports and specialty camps this summer, with the relief targeted to children from households earning less than 50% of the statewide median income.

A big infusion of cash for debt-free community college

The governor’s plan would dedicate $8 million, for each of the next three fiscal years, for the Pledge to Advance Connecticut or PACT, the state’s program to help students attend community college debt-free.

This would nearly double state funding for the cash-starved program and is projected to help approximately 7,800 students.

The administration’s proposal also includes $15 million over the coming biennium for the University of Connecticut’s main campus in Storrs and its satellite branches and another $10 million for the UConn Health Center in Farmington.

It also provides $15 million to the Board of Regents for Higher Education to stabilize finances for the four regional state universities.

The Westfield Town Council voted 7-1 on Tuesday to introduce an ordinance that allows for a downtown redevelopment plan to move forward.It will next … END_OF_DOCUMENT_TOKEN_TO_BE_REPLACED

New York CNN  —  Bed Bath and Beyond is closing another 87 stores as the struggling retailer barrels toward bankruptcy. … END_OF_DOCUMENT_TOKEN_TO_BE_REPLACED