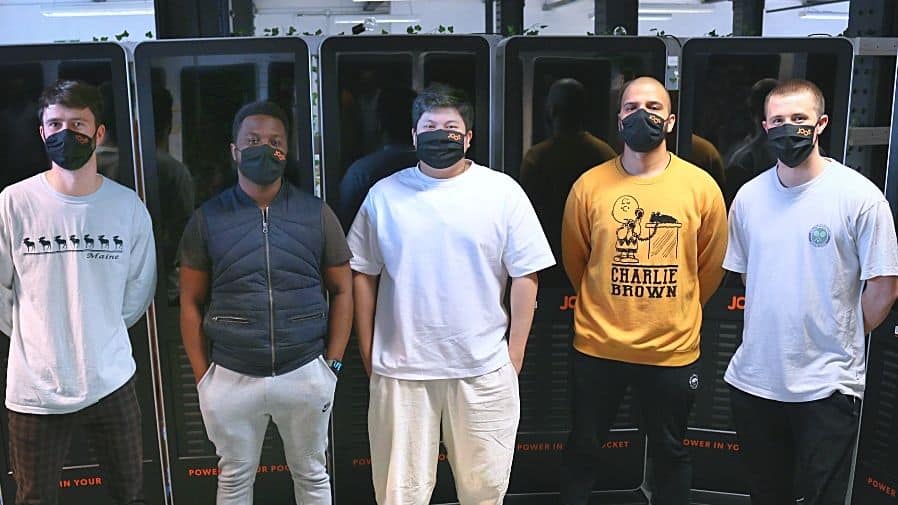 While much of the country stayed at home during the most recent lockdown, Joos have been out and about expanding their network of mobile power banks ready for when the world, and their phones, are out again. Joos’ revenue comes from power bank rental, available from stations the company installs and maintains for free in venues like bars, shopping centres, and transport hubs. Research has shown that venues with charging options will see revenue increase as customers with fuller batteries will stay longer and spend more.

Joos was started by three school friends from (Hann Zhao Liu) Singapore, (Peter Hu) China, and (Joshua Baah) Ghana. After observing how widespread power bank rental was in Asia, they delivered the model to the UK, where existing charging solutions usually meant leaving a phone in a locked cabinet. Working on a similar model to the Santander bike hire in London—a Joos charger can be rented from one location and dropped off at another.

While other companies have started to bring a similar model to the UK, they have all adopted a white-label model, taking power banks designed and used in Asian markets and rebranding them. Joos previously distributed a white-label solution under the brand name ChargeBolt, but soon realised that having a vertically integrated model — where they have control of the design, manufacture, and distribution — offered them significant advantages, allowing them to deliver the concept to the United Kingdom without being stuck with products and models designed for a different market.

This has meant that Joos has been able to develop features that other competitors don’t have and making them the only solution in Europe with Apple’s MFi licence. “We are the only Apple-certified provider of shared power banks operating in the West. Across Europe, North America and the UK, all of our competitors are, essentially, infringing on Apple’s IP rights,” Josh Baah, one of the company’s co-founders, tells UKTN.

The pandemic has, inevitably, had an impact on Joos, they built their new product in response to the pandemic. “We’re the only provider with medical-grade anti-microbial plastic on our power banks,” Baah says, “essentially reducing the lifespan of Covid-19 on their surfaces.” Joos also has an automatic quarantine system on returned power banks, not releasing them until any viral agent present has been broken down.

Despite being a product intended for out-of-home use during a period when everyone was forced to stay at home, Joos have been able to use the lockdowns productively. The first lockdown provided the opportunity to rebrand and transform from ChargeBolt to Joos. “We used the lockdown period to build a new product. We had our new stations designed in Paris whilst our marketing team in London optimised our app journey, making it sleek, easy & quick for people to rent a power bank,” Baah explains.

This year’s lockdown presented more challenges, the Joos team had a new product that was ready to go, but as people stayed in, the business had to focus on how they would survive the first half of 2021. “We had around 1,500 individual locations in the UK, and a lot of these have stayed closed,” Baah says, “we have focused on rolling out Joos where we could, particularly shopping centres, where we’re now the largest phone charging provider in the UK.” Joos has also signed a deal with Lord’s Cricket Ground, meaning that spectators will be able to update their Insta between overs without worrying about their battery.

The focus now is on expansion. Power-hungry devices will create a big market as the economy re-opens following lockdown and society is even more reliant on mobile devices to go about day-to-day life. Having secured a total £3.7 million in funding so far, including the founders’ investment, they are currently raising another round to help support their expansion beyond their current base across the UK & Ireland.

Baah believes the annual total addressable market is valued at over £3 billion globally, as their target market stretches across all demographics. “Joos can go anywhere: into stadiums, into train stations, it can be in shopping centres, and it can be in bars, clubs. And it doesn’t matter who you are, white-collar, blue-collar – everyone has a smartphone that runs out of battery.”

This story is sponsored by Joos.

Harrison Butker is going to be playing for another Super Bowl with the Kansas City Chiefs.Butker nailed the game-winning field goal to send the Chiefs … END_OF_DOCUMENT_TOKEN_TO_BE_REPLACED