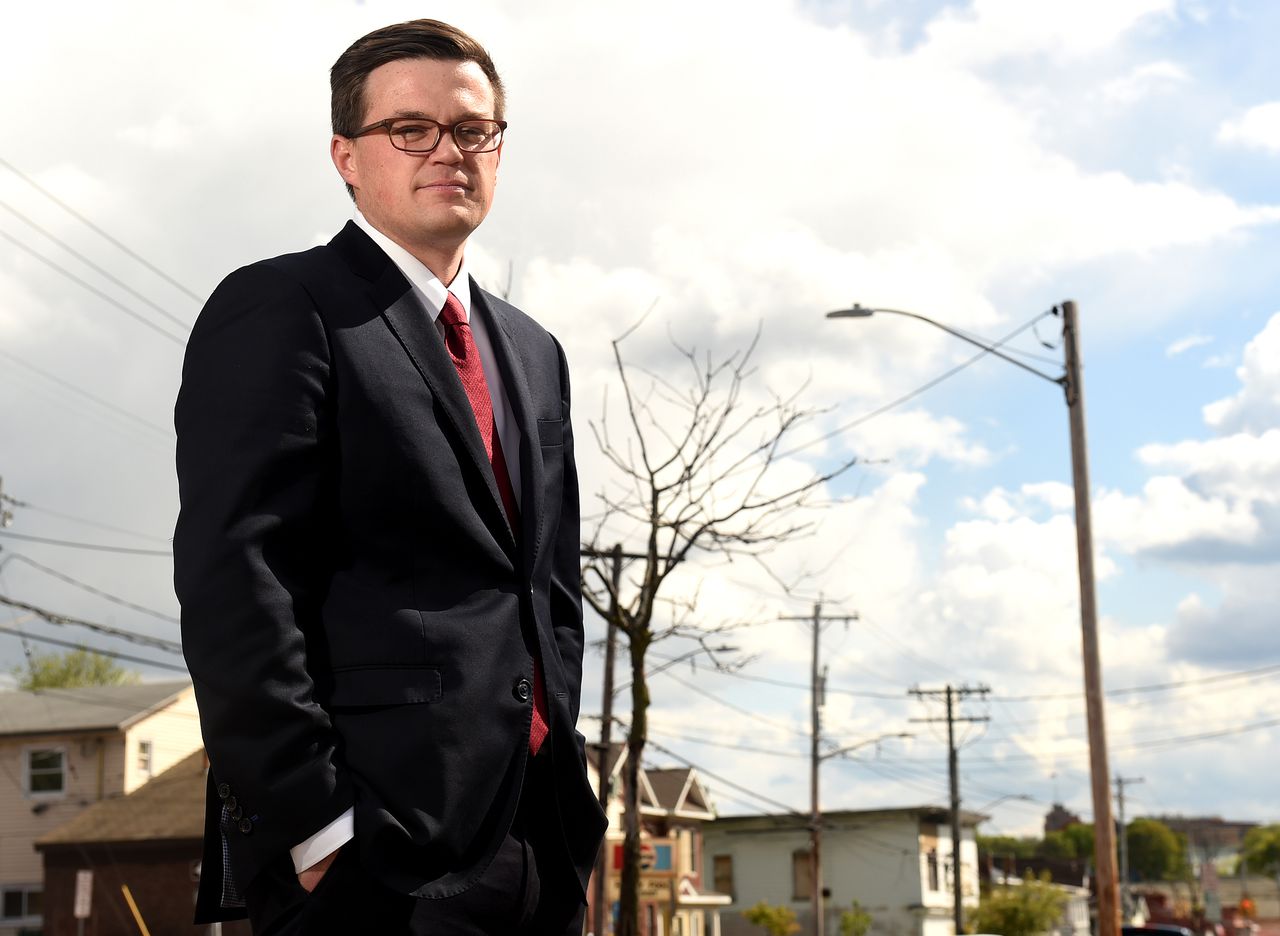 Syracuse, N.Y. — Michael Greene has a plan. In fact, he has lots of them.

He plans to reform the police department through organizational changes and belt-tightening. He’ll level the playing field on taxes for developers and homeowners. He plans to make it easier to walk, bike and take the bus to get around the city. And to hire more code inspectors to cite shoddy buildings.

Greene, a Democratic Common Councilor, is relying on those plans and a detailed set of policy proposals as he mounts a bid to be the next mayor of Syracuse.

“I’m running on policy and how policy can help the city and make it better,” he said. “I’m an urbanist. I love neighborhoods and cities. I’m someone who believes in cities and that’s where the future of the country is.”

Greene is the chosen candidate of the Onondaga County Democratic Committee, and is running in a primary on June 22 against his fellow councilor, Khalid Bey. The winner will take on Mayor Ben Walsh, an independent, and the victor in a Republican primary between Janet Burman and Thomas Babilon.

Greene, 34, lives on Cumberland Avenue in the outer University Hill neighborhood with his wife, Emily, and young daughter.

He grew up in Onondaga Hill, where he played baseball at West Genesee High School. After graduating from Cornell University, he moved to New York City and worked as a policy-maker at the Port Authority of New York and New Jersey and then for the city’s economic development corporation.

When he and his wife decided to move back to Central New York, he said, there was no question of where they would live.

Syracuse.com spoke with Greene on several occasions about what he would do if elected mayor. Here’s what he had to say.

Greene said his first priority upon taking office would be police reform. He’d start by installing a civilian in a newly created commissioner of public safety role to oversee the police department. The city charter, he said, establishes such a position.

That person would have some kind of law enforcement background. The chief of police — a cop — would report to the commissioner. The commissioner would oversee the day-to-day administration of the department (like monitoring overtime) and implement new policies.

“I don’t think the police department voluntarily reforms itself,” he said. “You see that with the current situation where Right to Know is just a battle.”

The Right to Know law was passed by the Common Council last year. It requires officers to explain why they’ve stopped someone, better document every encounter and leave a business card with anyone they speak to. It took effect in December but it was months before the policies were implemented.

Greene would also require the police chief to adhere to disciplinary actions recommended by the Citizen Review Board.

Greene wants to rewrite the rules for how tax breaks are awarded to real estate projects in the city. He’d establish a tiered system that prioritizes tax breaks for smaller development projects that are more in need of the money.

“Smaller projects need to have that money to rehab, say, a building on South Ave. that’s maybe a million dollars,” he said. “Compare that to a $30 million student housing project that probably doesn’t need the same amount of breaks.”

Greene said the tax breaks offered by the Syracuse Industrial Development Agency are more generous than the agency’s counterparts in cities like Buffalo and Rochester and even Onondaga County.

Improving the city’s public transportation for people who don’t drive is a first step toward revitalizing many of the city’s business corridors, Greene said. It would make for stronger neighborhoods and a higher quality of life.

“You need a walkable city with good public transportation and walkability,” he said. “You get those things right and the urban corridors become a lot more viable and sustainable.”

Greene said he’s glad Walsh is talking about some of these projects recently, but he doesn’t believe they’ve been a mayoral priority in Walsh’s first four years. Walsh is trying to pass a municipal sidewalk program right now — something Greene said should have and could have been done when he first took office in 2018.

The delay on those transportation issues is a matter of priorities, Greene said.

“I’m running because I want to have the ability to make the city focus on these things,” Greene said. “And these are things I’ve been passionate about since the beginning and if I’m mayor, I’ll get them done.”

During budget hearings this spring, Greene proposed spending $2 million on a citywide property tax reassessment. The item was voted down by the council.

That reassessment is badly needed, he said, because the existing assessments prey on low-income homeowners and benefit wealthier ones. The inequities were detailed in a series of stories from syracuse.com in 2019.

“If you’re in the poorest neighborhoods, you’re getting screwed over by the current tax system,” Greene said. “This city is a place that struggles with inequality and the fact that we have a tax system that perpetuates that needs to be changed.”

Greene said it’s politically unpopular to talk about reassessment because people in wealthy neighborhoods would likely see their assessments rise and their taxes increase. Still, he said, it’s the right thing to do and would lower the tax burden for people who are less able to afford it.

Would Greene take down the Columbus statue downtown?

Yes, he said, though he disagreed with Walsh’s process for the decision. He said there was too much indecision around the statue, and he still isn’t certain it will come down.

“I’m also critical of the fact that it’s been six months since the announcement and it seems like there’s no end in sight,” he said.

Recent issues at the Skyline Apartment building demonstrate that the current administration is reactive, not proactive, with code violations, Greene said.

He would have the city’s code enforcement director report directly to the mayor. That would include weekly meetings so he knows exactly what the major issues are in the city. Currently, the codes director reports to the commissioner of neighborhood and business development.

Greene said he would personally join a code inspector on the job once a week as well, even if it’s just for one visit.

He said the city also needs more code inspectors and more resources for the city lawyers and the administrative judge who handle code violations.

Where would the money for more housing inspectors come from?

“The police department,” he said.

Greene said he sees room in the department’s budget to be more efficient. The police budget continues to grow while the city is unable to pay for necessary housing enforcement, he said. That’s a concern.

Greene would rein in overtime costs, for example, and negotiate a contract with fewer generous incentives for officers.

“I’m not a ‘defund the police’ person,” he said. “I think we need the police officers and adequate staffing. But do I look at their budget and realize there’s room in there to be more efficient? Absolutely.”

Ray Al-Malt spent much of his Tuesday in Orlando, Florida, preparing for rain and high-speed winds. Ray … END_OF_DOCUMENT_TOKEN_TO_BE_REPLACED

Hello again everybody and welcome to our live blog with all of the latest financial news coming out of the United States this Saturday, October 1. Our … END_OF_DOCUMENT_TOKEN_TO_BE_REPLACED