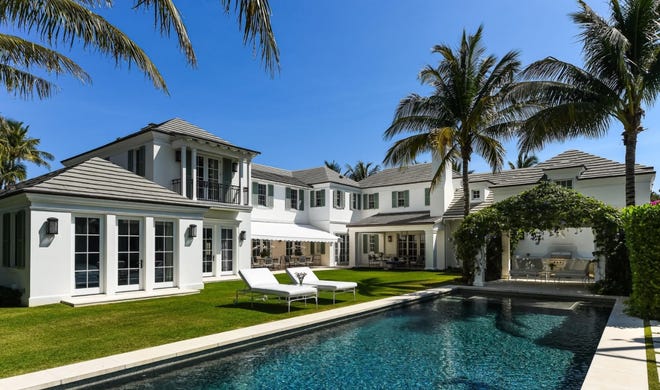 A mid-block house on the North End of Palm Beach at  304 Garden Road has sold for a reported $23.788 million, the price reported Friday in the local multiple listing service.

The house last changed hands about four years ago for a recorded $11.75 million when it was brand new.

A deed had not recorded as of early Friday afternoon, so the buyer’s identity isn’t yet known. It’s also unclear if the price reported in the MLS will match the one to be documents at the Palm Beach County Courthouse.

The house spent about two weeks on the market before it went under contract in early April, the MLS shows.

The seven-bedroom, West Indies-style house was owned by Julie Fisher Cummings, who had owned it since June 2017, property records show. She had bought it from a company controlled by its developer, E. Llwyd Ecclestone III. Cummings owned it as trustee of a revocable trust in her name.

With 9,100 square feet of living space, inside and out, the house stands on a half-acre lot on what is widely considered one of the North End’s prime streets, six roads north of the Palm Beach Country Club.

The house has extensive outdoor entertaining areas focused on a 60-foot-long pool with loggias, a gas fireplace, patios and gardens. One of the loggias has a summer kitchen.

The interior layout includes a master suite with dual bathrooms on the ground floor, a detail often sought by today’s buyers, real estate observers say. Other features include a three-car garage, a wine room, an elevator, a library, a formal dining room and a well-equipped kitchen with a butler’s pantry.

Agent Jim McCann of Premier Estate Properties handled the buyer’s side of the sale.

A Detroit native, Cummings is the daughter of the late Palm Beach philanthropists Max and Marjorie Fisher. Among her many charitable activities, she has served as vice chairwoman of the foundation her parents established in their names.

Cummings and her husband, Peter, had the house homesteaded in the latest county tax rolls, records show.

This is a developing story. Check back for updates.

Washington [US], October 3 (ANI): Some recent reports have claimed that the large camera housing on Apple's iPhone 14 Pro smartphones hinders the … END_OF_DOCUMENT_TOKEN_TO_BE_REPLACED

Hello again everybody and welcome to our live blog with all of the latest financial news coming out of the United States this Sunday, October 2. Our … END_OF_DOCUMENT_TOKEN_TO_BE_REPLACED

October 2022 Listing your home for sale is a marathon, but there are some easy tips and tricks to get ahead of your competition. Some of the easiest … END_OF_DOCUMENT_TOKEN_TO_BE_REPLACED