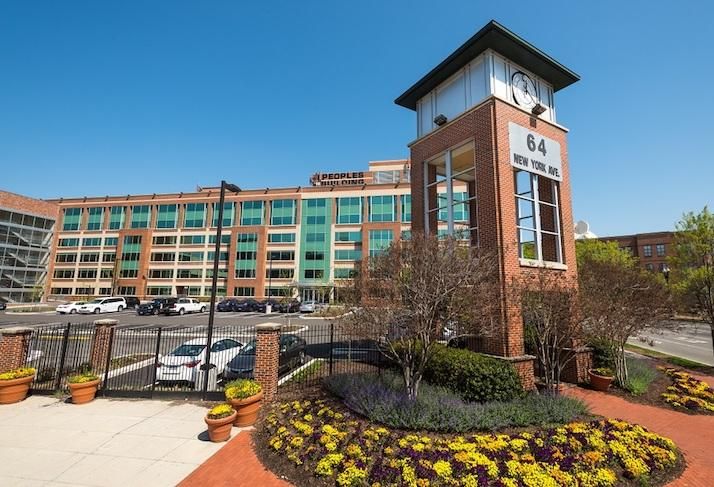 ASB Real Estate Investments announced Friday it sold the office building at 64 New York Ave. NE to Boyd Watterson for $201.75M. The Bethesda-based private equity investor disposed of the building as part of its $7.4B Allegiance Real Estate Fund, and it said it is part of a larger portfolio restructuring plan.

“Emerging from the pandemic-generated recession, ASB has seized on an excellent opportunity to execute on our ongoing strategy to trim portfolio exposure in office and retail and redeploy capital into industrial and multifamily assets,” ASB Senior Vice President Nicolas Franzetti said in a release.

The building sits two blocks from the NoMa Metro station and across the street from the notorious “Dave Thomas Circle” intersection, which D.C. bought in February and plans to transform.

The 355K SF office building is 97% leased, with D.C. government tenants including the Metropolitan Police Department and the Department of Human Services. It was constructed in 1909 and renovated in 2001 by Douglas Development.

Douglas sold it to Brookfield in 2005 for $103.1M, and Brookfield sold it to ASB in 2017 for $186.3M. Douglas Development founder Doug Jemal, in a November 2019 interview with Bisnow, identified the building as the first in a series of investments he made on the New York Avenue corridor.

In October, Boyd Watterson bought Reston’s Patriots Park office complex for $325M, and in December it acquired 499 South Capitol St. W for $85.9M. The Cleveland-based asset manager invests on behalf of multiple institutional investors and had $7.4B in gross real estate assets as of March 31.

Large technology companies such as SAP, IBM, and Google are underreporting their greenhouse gas emissions at a time of heightened scrutiny over the … END_OF_DOCUMENT_TOKEN_TO_BE_REPLACED

A BALASUBRAMANIAN: The crowd is very small, take that into account too. Then we realised that when the different purposes are being met and after … END_OF_DOCUMENT_TOKEN_TO_BE_REPLACED

With the labor market in rough shape, restaurant owners across the country have been forced to find new and creative ways to run their businesses. … END_OF_DOCUMENT_TOKEN_TO_BE_REPLACED