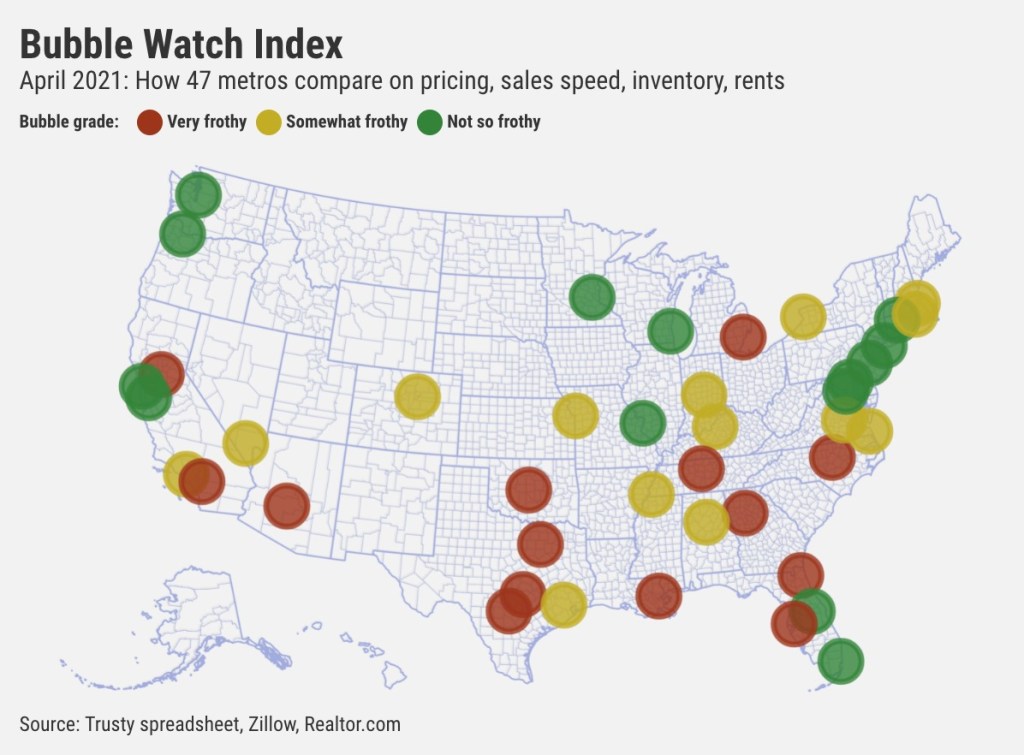 “Bubble Watch” digs into trends that may indicate economic and/or real estate market troubles ahead.

Source: The Bubble Watch Index is my trusty spreadsheet analysis of April homebuying data from Zillow and Realtor.com covering 47 big markets. The scorecard is based on average rankings for overvaluation (listing prices vs. values); overheating (list-price gains vs. value increases); selling speed (days on market vs. a year ago); year’s inventory change; and year’s rent change.

The index shows less overpayment happening near the expensive coastlines.

Consider the ranking of the five Golden State markets in the Bubble Watch Index where three million-dollar markets were far down this risk measurement.

No. 42 was San Francisco-Oakland …

And the state’s riskiest market, by this math, was No. 4 Riverside-San Bernardino counties …

Are house hunters getting skittish?

Every month since 1978, the Conference Board polls U.S. consumers and asks “Do you have plans to buy a home in the next six months?”

On a scale of zero bubbles (no bubble here) to five bubbles (five-alarm warning) … THREE BUBBLES … for California.

Remember, the Bubble Watch Index reflects relative exuberance among these markets. And as I often say, these kinds of rankings are part art and part science. So the beauty of any conclusion drawn from this analysis is definitely in the eye of the beholder.

However, if you’re like me and are squeamish that homebuying has become a tad irrational — plus, you’re a Californian — here’s some solace: the Golden State isn’t leading this unnerving buying binge.

Jonathan Lansner is the business columnist for the Southern California News Group. He can be reached at jlansner@scng.com

The UK’s antitrust watchdog started a new investigation of Alphabet Inc.’s Google, over suspicions it may have abused its dominant position across its … END_OF_DOCUMENT_TOKEN_TO_BE_REPLACED

This is the daily notebook of Mike Santoli, CNBC's senior markets commentator, with ideas about trends, stocks and market statistics. Dip-buyers have … END_OF_DOCUMENT_TOKEN_TO_BE_REPLACED

New York Tech has launched a new integrated marketing campaign, appearing on Long Island and in New York City. The “A Place for You” campaign includes … END_OF_DOCUMENT_TOKEN_TO_BE_REPLACED