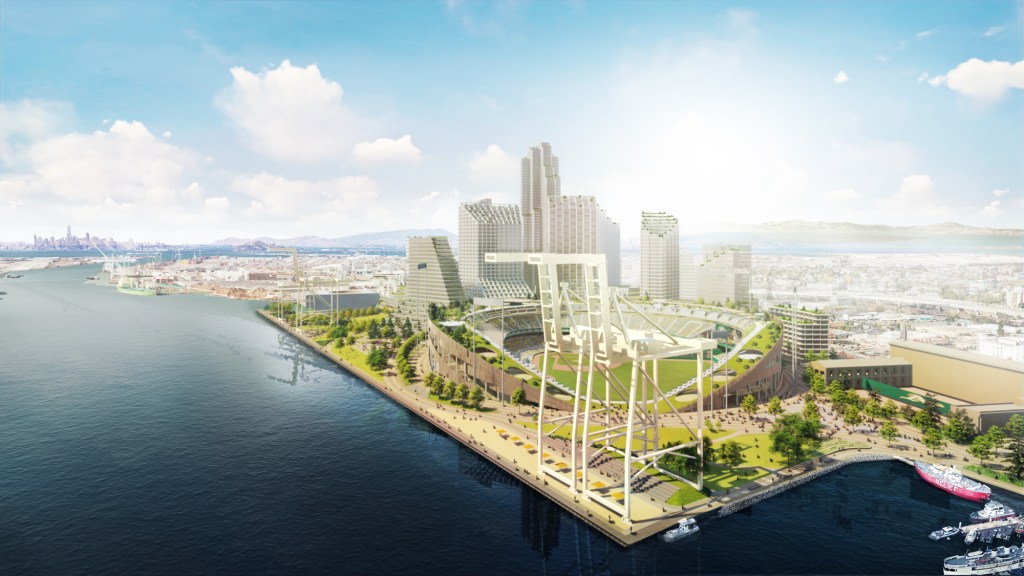 OAKLAND — The Alameda County Board of Supervisors may have thrown a wrench into the Oakland A’s plan to build a waterfront ballpark by declaring it’s not ready to accept a funding plan that the team says is key to making the project happen.

Following a long and contentious meeting Tuesday, the supervisors said they won’t even schedule a vote until September on a request that the county participate in the formation of a tax district to finance the infrastructure needed for a ballpark and the mixed-use development that eventually will surround it.

Oakland officials asked the supervisors to signal their approval of the request by the end of this month because the City Council on July 20 is scheduled to discuss the A’s plan to build a ballpark at the Port of Oakland’s Howard Terminal site.

The A’s want Oakland to create a couple of tax districts to help pay for the infrastructure of their proposed $12 million development, which in addition to a 35,000-seat ballpark includes 3,000 housing units, hundreds of hotel rooms, a performing arts center and commercial or retail space.

While the supervisors did not reject Oakland’s request to sign off on one of those tax districts and even expressed some optimism about the project, their refusal to vote now could complicate matters for the council at its July 20 meeting.

The A’s have demanded the council approve a non-binding term sheet at that meeting before taking a summer recess to signal its commitment to continue negotiating over the ballpark plan. A’s president Dave Kaval has said if the team does not secure approvals for the project by the end of this year it’ll leave Oakland.

But county supervisors sharply rebuked the city for not inviting them to the discussion much sooner, noting that two weeks is not enough time to analyze the complicated finance plan.

After years of not being “brought to the table,” board Chairman Keith Carson said, “now we’re being told to decide in 20 days.” He was referring to a letter sent late last month by City Administrator Ed Reiskin asking the county to opt into the tax district by the end of June.

“Without the County’s participation, the State, the County and the City is very likely to lose all ballpark related tax revenues, as Major League Baseball has directed the A’s to commencerelocation talks out of state,” Reiskin wrote.

When so-called “enhanced infrastructure financing districts” are formed, properties within them are assessed and the tax money derived from annual increases in their value is funneled directly into project-related uses and affordable housing instead of being distributed entirely to local governments and special districts.

Oakland’s consultant has estimated that the county could receive almost $17 million annually in property taxes over the next 45 years from the Howard Terminal financing district and keep about $6.3 million of it while forking over the rest for infrastructure work.

The A’s contend their project will spark the economic development that creates tax growth that otherwise wouldn’t exist.

Assistant City Administrator Betsy Lake said at Tuesday’s board meeting that may be true about the Howard Terminal financing district it’s asking the county to accept. But creating another tax district as suggested by the A’s for a mile-and-a-half section of Jack London Square and the waterfront area doesn’t seem to be “fiscally responsible,” she said in the first public admission that the city may support creating only one district.

Because the Jack London Square waterfront area is already full of commercial and residential real estate, it’s “unknowable” whether any growth in property value there could be attributed directly to the ballpark development, added Molly Maybrun, a project manager for the city who’s been involved in the negotiations. She said at least some of additional taxes would be generated “even in the absence of this project.”

“Oakland left last night’s meeting encouraged that we’re aligned to keep the A’s rooted in Oakland. We’re grateful the Board engaged the public in a robust, transparent discussion on what will become a regional asset for generations to come. We support the Supervisors’ direction to conduct their own independent financial analysis, and we will continue to work with all of our regional partners to build a waterfront ballpark that includes new public parks and affordable housing.”

As fans anxiously awaited the release of the season finale of the Netflix thriller “Stranger Things,” the network went down for a brief period on … END_OF_DOCUMENT_TOKEN_TO_BE_REPLACED

If you know of local business openings or closings, please notify us here.PREVIOUS OPENINGS AND CLOSINGS· Air Products and Chemicals Inc.'s chosen … END_OF_DOCUMENT_TOKEN_TO_BE_REPLACED