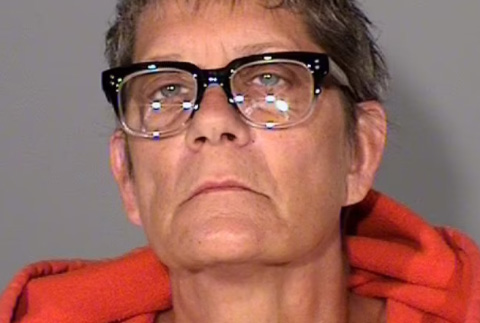 A Minnesota woman who made national headlines as “the neighbor from hell” has been charged again after authorities say she stalked a second family.

The alleged victims ended up moving out — and say they then had difficulty selling their home because of Christensen.

Christensen gained notoriety almost 10 years ago — including an appearance on ABC’s “20/20” — when she pleaded guilty to harassing neighbors on the White Bear Lake cul-de-sac where she had previously lived.

In her years-long campaign against the mother of her daughter’s playmate, she posted large signs taunting the woman as a recovering alcoholic; she also made lewd gestures in front of the family’s children and party guests.

As part of her sentence in that 2012 case, she was ordered to move out of her home.

In her new neighborhood, in White Bear Township, she allegedly turned her attention to a family that moved next door to her in 2016.

According to the new complaint, she repeatedly took video of them in their yard, yelled at them, cut their cable and internet lines, and mounted a mannequin head outside her house that she would swivel to face them.

The family finally moved out in 2019; shortly thereafter, their relative who took over the residence also fled.

When the house went on the market, the police received calls reporting that Christensen harassed real estate agents and potential buyers when they arrived to tour the home, yelling profanities and recording video. The mannequin head also frightened clients, the agents said, according to the complaint.

“We fear for our lives and for the lives of the renters and prospective home buyers and agents. I am losing sleep,” said one of the homeowners in a statement included in the complaint.

Christensen defended her actions by saying she has a First Amendment right to freedom of speech.

At the time of her conviction, Christensen was a state employee, working as an executive assistant for the Twin Cities policy and planning agency the Metropolitan Council. She is not currently listed in the online database of state workers.

She had her first court appearance Friday, and her next appearance is scheduled for June 24.

The University of Plymouth, the AHSN Network and Boehringer Ingelheim, has launched evidence-based recommendations to drive inclusive digital health … END_OF_DOCUMENT_TOKEN_TO_BE_REPLACED

This year’s Rising Stars of Private Equity has been published at a time of great uncertainty for the sector, as the young professionals on our list … END_OF_DOCUMENT_TOKEN_TO_BE_REPLACED

If you know of local business openings or closings, please notify us here.PREVIOUS OPENINGS AND CLOSINGS· Air Products and Chemicals Inc.'s chosen … END_OF_DOCUMENT_TOKEN_TO_BE_REPLACED