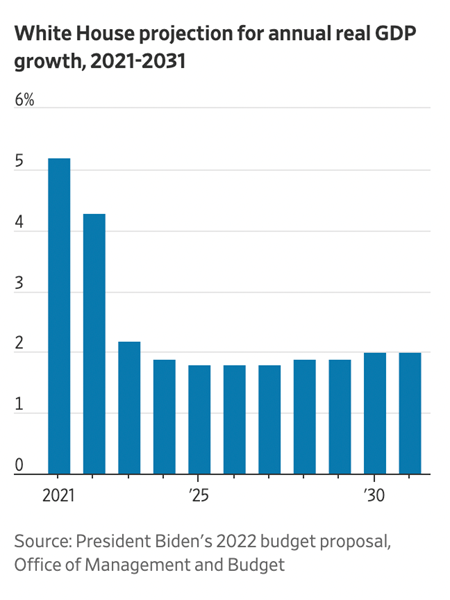 Last week, President Biden released a $6+ trillion budget proposal that would take the US to unprecedented levels of government spending and taxation. We already covered the major economic consequences this would have and how it would hurt everyday Americans. But new scrutiny of the fine print of Biden’s plan by the Wall Street Journal has revealed a bizarre detail that further undercuts its merits.

The progressive argument in favor of government spending is supposed to be that it will help stimulate economic growth. But the White House’s own projections essentially concede that their big-spending plans won’t lead to growth over the long run.

As reported by the Journal, Biden’s budget projects that growth will surge to 5.2 percent in 2021 and 4.3 percent in 2022. Those numbers are strong. But then, by the White House’s own admission, growth will fall to 2.2 percent in 2023 and slump to around 1.9 percent for the rest of the decade. These levels are bleak, not the roaring revival Biden has promised.

“The White House is essentially conceding that all of its unprecedented monetary and fiscal stimulus really is living for today with little regard for the future,” the Journal’s editorial board writes. “It implicitly concedes that the growth it spurs now will have to be paid back later in the form of higher taxes or tighter monetary policy, which might reduce growth. This is the definition of a ‘sugar high.’”

“This contrasts with genuinely pro-growth policies, which seek to create the circumstances for long-term prosperity,” they conclude. “They create better permanent incentives to work and invest.”

The Journal’s apt “sugar high” analogy brings to mind a poignant (and tragically still highly relevant) passage from the classic 1946 book Economics in One Lesson by Henry Hazlitt (emphasis added):

“Doesn’t everybody know, in his personal life, that there are all sorts of indulgences delightful at the moment but disastrous in the end? Doesn’t every little boy know that if he eats enough candy he will get sick? (…) …do not the idler and the spendthrift know, even in the midst of their glorious fling, that they are heading for a future of debt and poverty?”

“Yet when we enter the field of public economics, these elementary truths are ignored,” Hazlitt concludes. This ignorance drives the “sugar high” fatal flaw that makes Biden’s big-spending budget sure to backfire over the long run—even according to the president’s own economists.

As fans anxiously awaited the release of the season finale of the Netflix thriller “Stranger Things,” the network went down for a brief period on … END_OF_DOCUMENT_TOKEN_TO_BE_REPLACED

If you know of local business openings or closings, please notify us here.PREVIOUS OPENINGS AND CLOSINGS· Air Products and Chemicals Inc.'s chosen … END_OF_DOCUMENT_TOKEN_TO_BE_REPLACED