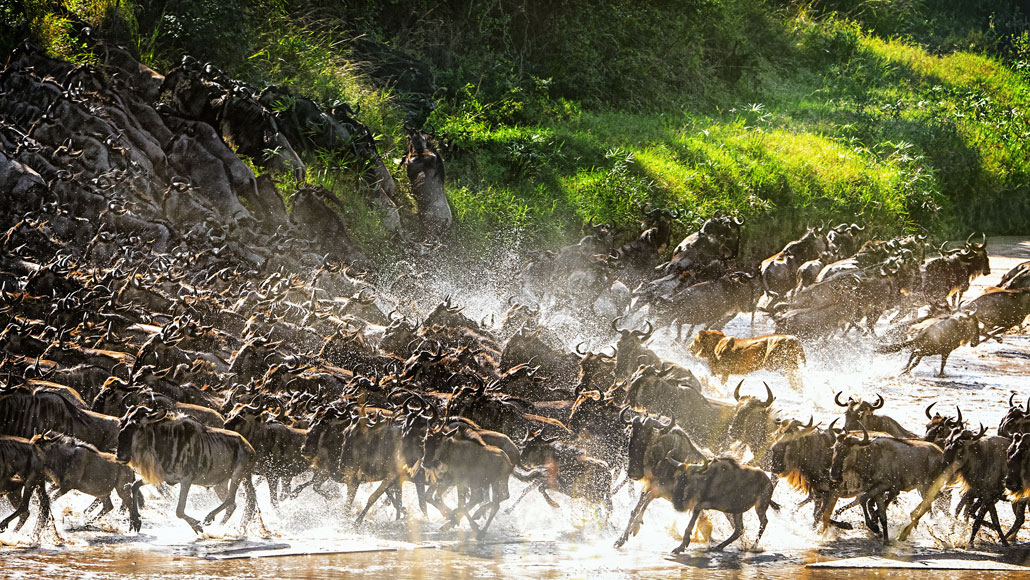 The Serengeti looks largely like it did hundreds of years ago.

Lions, hyenas and other top predators still stalk herds of wildebeests over a million strong, preventing them from eating too much vegetation. This diversity of trees and grasses support scores of other species, from vivid green-orange Fischer’s lovebirds to dung beetles. In turn, such species carry seeds or pollen across the plains, enabling plant reproduction. Humans are there too, but in relatively low densities. Overall, it’s a prime example of what biologists call an ecologically intact ecosystem: a bustling tangle of complex relationships that together sustain a rich diversity of life, undiminished by us.

Such places are vanishingly rare.

The vast majority of land on Earth — a staggering 97 percent — no longer qualifies as ecologically intact, according to a sweeping survey of Earth’s ecosystems. Over the last 500 years, too many species have been lost, or their numbers reduced, researchers report April 15 in Frontiers in Forests and Global Change.

Of the few fully intact ecosystems, only about 11 percent fall within existing protected areas, the researchers found. Much of this pristine habitat exists in northern latitudes, in Canada’s boreal forests or Greenland’s tundra, which aren’t bursting with biodiversity. But chunks of the species-rich rainforests of the Amazon, Congo and Indonesia also remain intact.

“These are the best of the best, the last places on Earth that haven’t lost a single species that we know of,” says Oscar Venter, a conservation scientist at the University of Northern British Columbia in Prince George who wasn’t involved in the study. Identifying such places is crucial, he says, especially for regions under threat of development that require protection, like the Amazon rainforest.

Conservation scientists have long tried to map how much of the planet remains undegraded by human activity. Previous estimates using satellite imagery or raw demographic data found anywhere from 20 to 40 percent of the globe was free from obvious human incursions, such as roads, light pollution or the gaping scars of deforestation. But an intact forest canopy can hide an emptied-out ecosystem below.

“Hunting, the impacts of invasive species, climate change — these can harm ecosystems, but they can’t be easily sensed via satellite,” says conservation biologist Andrew Plumptre of the University of Cambridge. A Serengeti with fewer lions or hyenas — or none at all — may look intact from space, but it’s missing key species that help the whole ecosystem run.

What exactly constitutes a fully intact and functioning ecosystem is fuzzy and debated by ecologists, but Plumptre and his colleagues started by looking for habitats that retained their full retinue of species, at their natural abundance as of A.D. 1500. That’s the baseline the International Union for the Conservation of Nature uses to assess species extinctions, even though humans have been altering ecosystems by wiping out big mammals for thousands of years (SN: 8/26/15).

Large swaths of land are necessary to support wide-ranging species. So the researchers initially considered only areas larger than 10,000 square kilometers, roughly the size of Puerto Rico. The team combined existing datasets on habitat intactness with three different assessments of where species have been lost, encompassing about 7,500 animal species. While 28.4 percent of land areas larger than 10,000 square kilometers is relatively free from human disturbance, only 2.9 percent holds all the species it did 500 years ago. Shrinking the minimum size of the area included to 1,000 square kilometers bumps the percentage up, but barely, to 3.4.

Simply retaining species isn’t enough for ecological intactness, since diminished numbers of key players could throw the system out of whack. The researchers tallied up the population densities of just over a dozen large mammals whose collective ranges span much of the globe, including gorillas, bears and lions. This is a narrow look, Plumptre concedes, but large mammals play important ecological roles. They also have the best historical data and are also often the first to be affected by human incursion. Factoring in declines in large mammals only slightly decreased the percentage of ecologically intact land, down to 2.8 percent.

Overall the tally of ecologically intact land “was much lower than we were expecting,” says Plumptre. “Going in, I’d guessed that it would be 8 to 10 percent. It just shows how huge an impact we’ve had.”

Both Venter and Jedediah Brodie, a conservation ecologist at the University of Montana in Missoula, question whether the authors were too strict in their definition of ecological intactness.

“Many ecosystems around the world have lost one or two species but are still vibrant, diverse communities,” Brodie says. A decline in a few species may not spell disaster for the whole ecosystem, since other species may swoop in to fill those roles.

Still, the study is a valuable first look that shows us “where the world looks like it did 500 years ago and gives us something to aim for,” Plumptre says. It also identifies areas ripe for restoration. While only 3 percent of land is currently ecologically intact, the introduction of up to five lost species could restore 20 percent of land to its former glory, the researchers calculate.

Species reintroductions have worked well in places like Yellowstone National Park, where the restoration of wolves has put the ecosystem back into balance (SN: 7/21/20). Such schemes may not work everywhere. But as the global community discusses how to protect nature over the next decade (SN: 4/22/20), Plumptre hopes this study will prompt policy makers to “not just protect the land that’s there, but also think about restoring it to what it could be.”

EAST HANOVER, NJ — Sandwich cookie pieces are the key ingredient in one of the most popular ice cream flavors. Now, Mondelez International, Inc., the … END_OF_DOCUMENT_TOKEN_TO_BE_REPLACED

Facebook building the world’s fastest AI supercomputer to help detect and moderate offensive posts and content, from among its billions of … END_OF_DOCUMENT_TOKEN_TO_BE_REPLACED

The entire financial world is holding its collective breath in anxious anticipation just 24-hours before the next Federal Reserve meeting. … END_OF_DOCUMENT_TOKEN_TO_BE_REPLACED