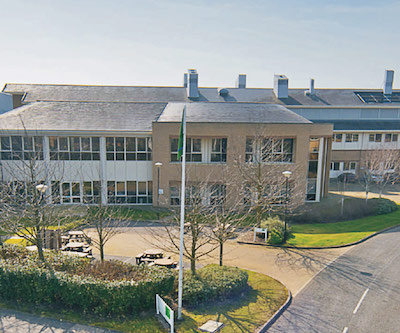 Oxford Properties Group has made its first life sciences acquisition in the United Kingdom as part of its plan to build a multi-billion-dollar portfolio in the sector.

The Toronto-based global investor, asset manager and developer paid $77.2 million Cdn to buy 310 Cambridge Science Park, in the city of Cambridge, from the Local Authorities’ Property Fund. The off-market transaction means Oxford has deployed in excess of $1.7 billion in capital into the life sciences sector so far in 2021, with its previous acquisitions in the U.S. and Canada.

“Since our first life sciences investment in 2017 this sector has been one of Oxford’s key global conviction calls,” said Jo McNamara, Oxford’s executive vice-president, Europe and Asia-Pacific, in the announcement Friday morning.

“The sector is supported by several structural tailwinds including demographic changes and the convergence of science and technology. Advances in data analytics and AI are accelerating life-changing innovations across biotech, pharmaceuticals, nutrition and medical devices.

“As a result, both private and governmental funding for promising products and companies has markedly increased in recent years.

“As this capital is deployed, occupier requirements increase, leading to the availability of little to no space in key global hubs such as the Cambridge Science Park or Kendall Square in Boston, which provide tenants with highly desirable networking and talent pooling ecosystems.”

The Cambridge building includes approximately 59,000 square feet of laboratory and office space, with around half fitted out as high specification wet labs. It is currently leased to Astra Zeneca until November 2023, when that firm will relocate to a new headquarters.

Founded in 1970, the Cambridge Science Park is a 152-acre campus at the northern edge of Cambridge with approximately 1.9 million square feet of office, lab and R&D space. It contains 130 occupiers spanning life sciences, pharmaceuticals, technology and engineering.

The complex is currently 100 per cent leased. It benefits from strong road connections provided by the A14 and public transport including the guided busway, a light transport system that connects the campus with the city centre, Cambridge North train station and surrounding villages.

“Cambridge Science Park is the most established life sciences campus in the U.K. and is the perfect location for Oxford to expand its platform into Europe,” said Abby Shapiro, senior vice-president, head of office, retail and life sciences at Oxford, in the release.

“The Cambridge market demonstrates strong demand fundamentals yet suffers from a lack of good quality supply. Unit 310 is of an incredibly high quality and provides a near-term opportunity to crystallize reversionary income on high-standard lab specifications and bring rents up to market levels.

“This ability to tap into the significant demand for laboratory space in the area will enable us to create extra value.”

Oxford intends to deploy approximately $2.1 billion in European life sciences over the next five years, as part of its goal to build a $14- to $20-billion global life sciences business.

“Oxford’s initial European focus will be on the U.K., where we are actively seeking opportunities in the ‘Golden Triangle’ and the Greater London area,” Shapiro explained in the release.

“The momentum driving the life sciences sector in the U.K. is supported by the research and start-ups emanating from some of the world’s most prestigious medical universities, the focused funding of the U.K. government and increased levels of venture capital activity.

“Given the relative low levels of existing supply, Oxford will look to utilize our world-class development expertise to help provide the critically needed lab infrastructure required to allow innovative biotech firms to deliver the life-saving therapeutics of tomorrow.”

Other recent Oxford life sciences deals include last month’s acquisition of Foundry31 in the San Francisco Bay Area and the acquisition of Boren Lofts in Seattle.

“As we have grown our platform in North America over the past few years, we have seen the sector evolve and mature and we are now beginning to see the same pattern emerging in Europe,” McNamara said in the announcement.

“We intend to use the learnings and expertise we have built up in the U.S. to fulfil our ambition to replicate that success in Europe.”

The Westfield Town Council voted 7-1 on Tuesday to introduce an ordinance that allows for a downtown redevelopment plan to move forward.It will next … END_OF_DOCUMENT_TOKEN_TO_BE_REPLACED

New York CNN  —  Bed Bath and Beyond is closing another 87 stores as the struggling retailer barrels toward bankruptcy. … END_OF_DOCUMENT_TOKEN_TO_BE_REPLACED