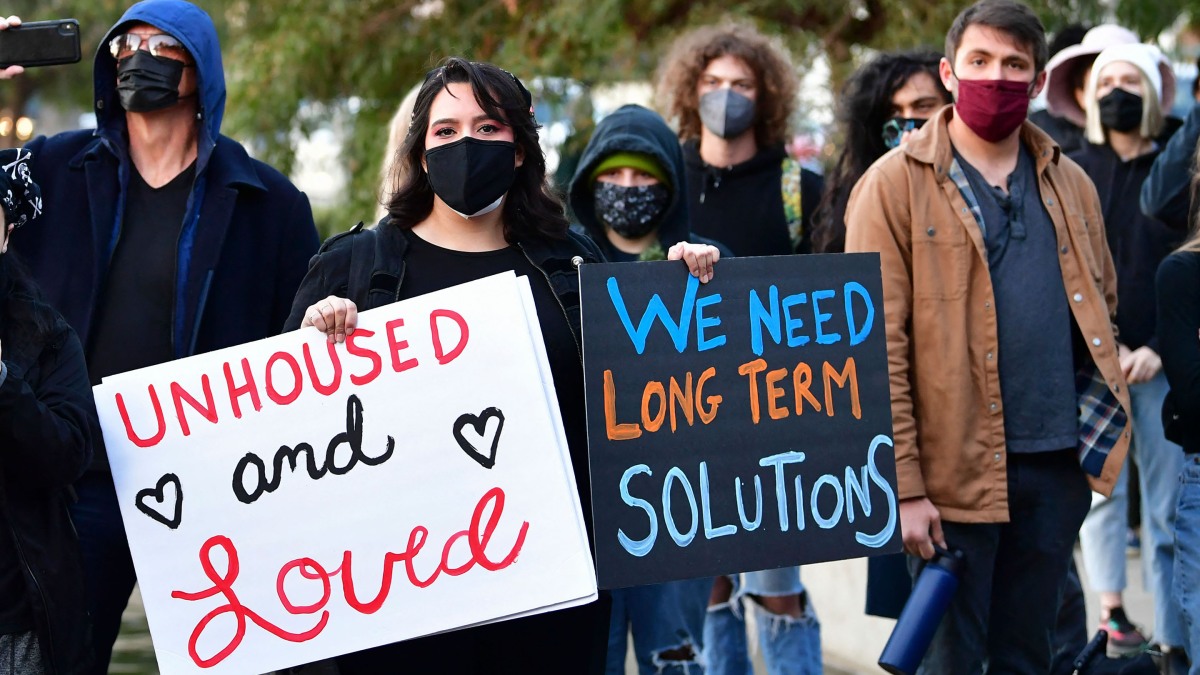 Homelessness advocates across the country are feeling pretty hopeful right now. And, weirdly, it’s mostly because of the pandemic.

“I’m much more confident about our ability to reduce the number of homeless people, at least in the short run,” said Nan Roman, chief executive of the National Alliance to End Homelessness.

That’s because COVID has resulted in a tidal wave of federal money directed at helping the roughly 580,000 people without stable shelter.

Under the Biden administration’s American Rescue Plan, $10 billion is set to go to local governments this year for emergency housing vouchers and low-income housing.

Compared to the plan’s $1.9 trillion overall price tag, that may not sound like much. But Roman said the additional funding could be a game-changer.

“We think it would allow us probably to house about 150,000 people, and create about 30,000 units of affordable housing,” she said.

The pandemic may have made that easier, too.

“There is a lot of hotel and motel stock that’s been losing money and is acquirable,” Roman said. “There are also office buildings that have been abandoned.”

Tomiquia Moss is the chief executive of All Home, a nonprofit that’s leading the effort. She said she knows the dustbin of history is littered with plans to end homelessness that, well, didn’t end homelessness.

“I think it’s fair that folks are skeptical, given the history,” Moss said.

Take those empty hotels and offices. With the economy rebounding, there are more private developers ready to compete with governments and nonprofits. And many homeowners will still fight to keep homeless housing out of their neighborhoods.

But at the very least, the pandemic may be making the public more receptive to Moss’ message about the urgency of the crisis.

“I have been doing this work for more than 20 years in the Bay Area, committing to treating homelessness like a public health crisis,” Moss said.

A deadly virus is a good reminder of that.

What do vaccines mean for economic recovery?

COVID-19 is not going anywhere anytime soon, according to expert witnesses who testified at a recent hearing held by the Joint Economic Committee. Put simply, we can’t eradicate the virus because it infects other species, and there will also be folks who choose not to get the vaccine or don’t mount an immune response, according to Dr. Céline Gounder at NYU School of Medicine & Bellevue Hospital. “That means we can’t only rely on vaccination,” Gounder said. She said the four phases of recovering from the pandemic are ending the emergency, relaxing mitigation measures, getting to herd immunity and having long-term control.

Can businesses deny you entry if you don’t have a vaccine passport?

As more Americans get vaccinated against COVID-19 and the economy begins reopening, some businesses are requiring proof of vaccination to enter their premises. The concept of a vaccine passport has raised ethical questions about data privacy and potential discrimination against the unvaccinated. However, legal experts say businesses have the right to deny entrance to those who can’t show proof.

What do I need to know about tax season this year?

Glad you asked! We have a whole separate FAQ section on that. Some quick hits: The deadline has been extended from April 15 to May 17 for individuals. Also, millions of people received unemployment benefits in 2020 — up to $10,200 of which will now be tax-free for those with an adjusted gross income of less than $150,000. And, for those who filed before the American Rescue Plan passed, simply put, you do not need to file an amended return at the moment. Find answers to the rest of your questions here.

The UK tech community has reacted with an outpouring of shock and sadness upon learning that Tech Nation, the entrepreneur network that has supported … END_OF_DOCUMENT_TOKEN_TO_BE_REPLACED

© APFedEx will cut more than 10 per cent of its global leadership team, adding to the more than 12,000 employees it has shed over the past seven … END_OF_DOCUMENT_TOKEN_TO_BE_REPLACED

The Westfield Town Council voted 7-1 on Tuesday to introduce an ordinance that allows for a downtown redevelopment plan to move forward.It will next … END_OF_DOCUMENT_TOKEN_TO_BE_REPLACED