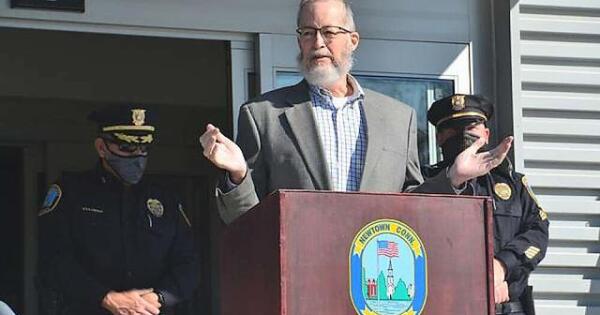 As tentatively predicted last fall, Newtown’s first selectman and the chairman of the Public Building & Site Commission were both extremely pleased to report that not only did the new Police Headquarters project finish ahead of schedule — but it will be closing out at least $300,000 under budget.

That windfall was confirmed April 28 by Town Finance Director Robert Tait. Briefing The Newtown Bee ahead of the PBSC meeting the night before, Chairman Robert Mitchell said except for specific legal language that has to be read into the record at the panel’s May meeting, that public building project is complete.

Mitchell said Consigli Construction, the town’s vendor for all construction to refit a former Taunton Press administrative building at 191 South Main Street, will be returning the lion’s share of contingency funds built into the spending package.

“We completed the review and mark-up of the project close-out documents, and that was the last thing we needed to do,” Mitchell said. “Now that it’s all completed, so we’re all set with the new police station.”

Mitchell said the formality of reading a scripted statement coming from the town attorney into the record at the next PBSC will release the commission from oversight and management of this official town project.

First Selectman Dan Rosenthal said part of the windfall included an energy-saving grant the facility was awarded. He also pointed out how rare it is to see such a significant public building project coming in ahead of schedule and under budget — especially by what could amount to nearly $350,000.

“To have a project delivered with so many things going right, including being under budget — how often do you hear that about a municipal building project?” the first selectman asked rhetorically.

Regarding another project that is just ramping up in town, this time with the school district, Mitchell also shared some measured good news.

The PBSC chairman said upon his latest review, it appears the latest Hawley School project “is in great shape right now.”

While he said the design team is still working on refining numbers as part of the Phase Zero work that has already been approved and financed by the district, the reconciled project budget currently shows the proposed work can all be completed under the $8 million earmarked in the town Capital Improvement Plan (CIP).

Once all potential costs are fully vetted, Mitchell sees the spending authorization going to voters for consideration on the November 2021 Election Day ballot.

“It looks like we have some cushion in there, along with various contingencies,” he said. “So it looks like we’ll have a solid number going to voters in the November referendum.”

The $300,000 already allocated for the pre-construction development and design is being spent now, and includes the delivery of a solid anticipated project budget.

“So provided it’s approved by voters, the day after the November vote, we’ll be able to go out to bid,” he added.

Regarding the Sandy Hook Permanent Memorial, now that voters have approved a bonding measure in this week’s referendum, the construction manager will complete construction documentation in order to complete the first major phase of the project this summer, with an eye on completion sometime next spring.

Turning his attention to another possible but unlikely future project, Mitchell noted that the now vacant Town Hall South facility — which formerly housed the police department, Social Services, and Parks & Rec offices — should probably be slated for demolition versus renovation.

“I hope it doesn’t come to us,” he said of any proposals to re-use the building. “The best thing to do with Town Hall South is tear it down.”

Mitchell said when he was first approached a quarter century ago by former Police Chief James E. Lysaght, Jr, he went through the entire building.

“That had to be over 20 years ago,” Mitchell said. “And back then, I could have given him my report in one sentence: ‘Tear it down and start over again.’ The building has a stream running under it, and a lot of issues with the facility itself [including not being ADA and safety code compliant], so I say sell the property, rip it down, and do something nice for the town.”

In closing, Mitchell confirmed he was reelected to chair the PBSC along with Art Norton returning as vice chair.

“So we will be carrying on from here,” he added.

Newly reinstalled Public Building & Site Commission Chair Robert Mitchell is pictured at last fall’s opening of the new police headquarters. Mitchell and First Selectman Dan Rosenthal told The Newtown Bee this week that multimillion-dollar project will be closing out under budget — returning between $300,000 and $350,000 to local taxpayers. —Bee file photo

The UK’s antitrust watchdog started a new investigation of Alphabet Inc.’s Google, over suspicions it may have abused its dominant position across its … END_OF_DOCUMENT_TOKEN_TO_BE_REPLACED

This is the daily notebook of Mike Santoli, CNBC's senior markets commentator, with ideas about trends, stocks and market statistics. Dip-buyers have … END_OF_DOCUMENT_TOKEN_TO_BE_REPLACED

New York Tech has launched a new integrated marketing campaign, appearing on Long Island and in New York City. The “A Place for You” campaign includes … END_OF_DOCUMENT_TOKEN_TO_BE_REPLACED