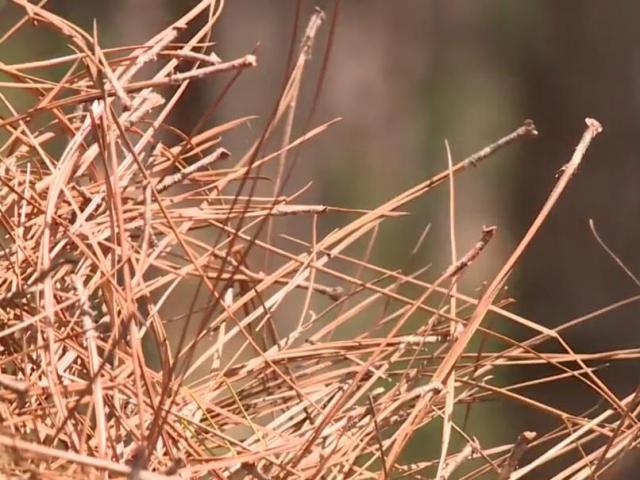 Pine straw is big business across the Southeast and rakes in about $200 million every year. It’s even a crime in North Carolina state to steal straw.

Terry Bryant is a man of good timber.

“We’re in great demand,” explained Bryant. “It is a good business to be in at the moment.”

Bryant is a landowner in Moore County. He raises longleaf pine trees, which is also North Carolina’s state tree.

“I think it’s wise to hang onto your timber and let it produce an annual crop,” said Bryant.

He hires crews to rake and bale the straw, which he then sells as mulch.

Bryant said Moore County alone produces around 10 million bales of straw every year. At $3 to $6 a bale, money does fall off these trees.

Compare that to about $5,000 for logging a mature stand of longleaf, which takes about 50 years to raise.

Bryant said because of that, he has incentive to let it stand.

“A good healthy tree can be a hundred years old and still be producing an annual crop,” he added.

Mike Wilson gave up peach farming more than 40 years ago; he now has 600 acres blanketed in longleaf, an ecosystem he longs to protect.

“I can show you in black and white where I can make more money on pine straw than cutting timber,” said Wilson.

“It’s a native tree, but don’t go around pilfering other people’s pine needles,” he added. “Stealing pine straw is a Class H felony in North Carolina … and yes, straw thieves have been prosecuted.”

“They came on a dark, rainy night and loaded it right out of a trailer,” said Wilson.

But the culprits were caught and convicted.

Clayton Todd loaded up his straw the legal way — by buying it. He said his flower beds love it.

“It does not attract beetles and bugs and termites and stuff like that. It decomposes and goes away and you just refresh it,” said Todd.

Pine straw is available at garden stores and from farmers themselves. It’s typically more expensive than wood bark because it doesn’t attract termites and better retains water. Franchise concepts that teach skills to children seems to be a recipe for success here on Long Island. Whether they focus on education, like The … END_OF_DOCUMENT_TOKEN_TO_BE_REPLACED

CNBC's Jim Cramer on Wednesday told investors that they should take gloomy economic commentary from bank executives with a grain of salt. "Don't panic … END_OF_DOCUMENT_TOKEN_TO_BE_REPLACED