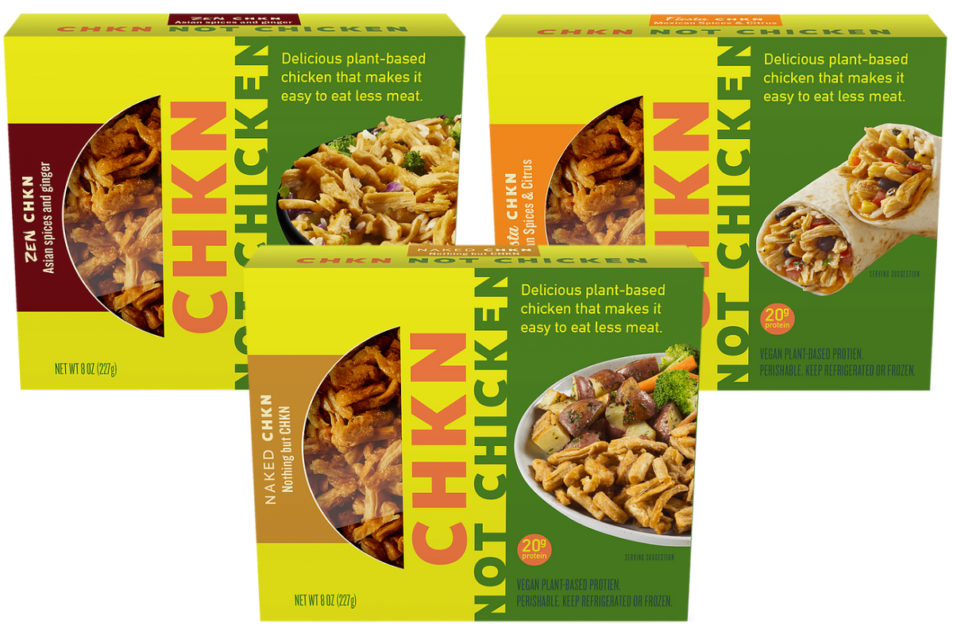 PORTLAND, ORE. — CHKN Not Chicken raised $4.5 million in a Series A funding round led by Stray Dog Capital.

The Portland-based startup offers a plant-based chicken alternative made with pea protein. Featuring 20 grams of protein and 140 calories per 8-oz serving, the product may replace chicken in a range of recipes such as stir fry, rice bowls, tacos, sandwiches, salads, soups, pasta and more. The initial product line includes a traditional Naked CHKN variety, a Fiesta CHKN flavor featuring Mexican spices and citrus and a Zen flavor featuring Asian spices and ginger.

CHKN Not Chicken will use funds from the Series A round to launch its product assortment into retailers across the United States and expand partnerships with quick-service and casual dining restaurants.

The launch is the culmination of two years of research and development of the company’s proprietary extrusion, flavor infusion and enrobing technology, which allows the product to replicate the juiciness, texture and flavor of conventional chicken, said Brian Pope, co-founder and chief executive officer.

“We are excited to partner with Stray Dog Capital and share their passion for creating a healthier, humane and more sustainable future,” Mr. Pope said. “By creating delicious food that also happens to be plant-based, we believe we can dramatically increase the number of flexitarians in the world who are becoming more mindful of the foods they eat and are looking for options that allow them to create delicious meat-free versions of their favorite recipes.”

Prior to launching CHKN Not Chicken, Mr. Pope was chief growth officer at Nuun Hydration, a plant-based hydration brand that was acquired by Nestle Health Sciences in May. He also was chief marketing officer at Popchips, Neuro Drinks and Virgin Galactic.

As fans anxiously awaited the release of the season finale of the Netflix thriller “Stranger Things,” the network went down for a brief period on … END_OF_DOCUMENT_TOKEN_TO_BE_REPLACED

If you know of local business openings or closings, please notify us here.PREVIOUS OPENINGS AND CLOSINGS· Air Products and Chemicals Inc.'s chosen … END_OF_DOCUMENT_TOKEN_TO_BE_REPLACED