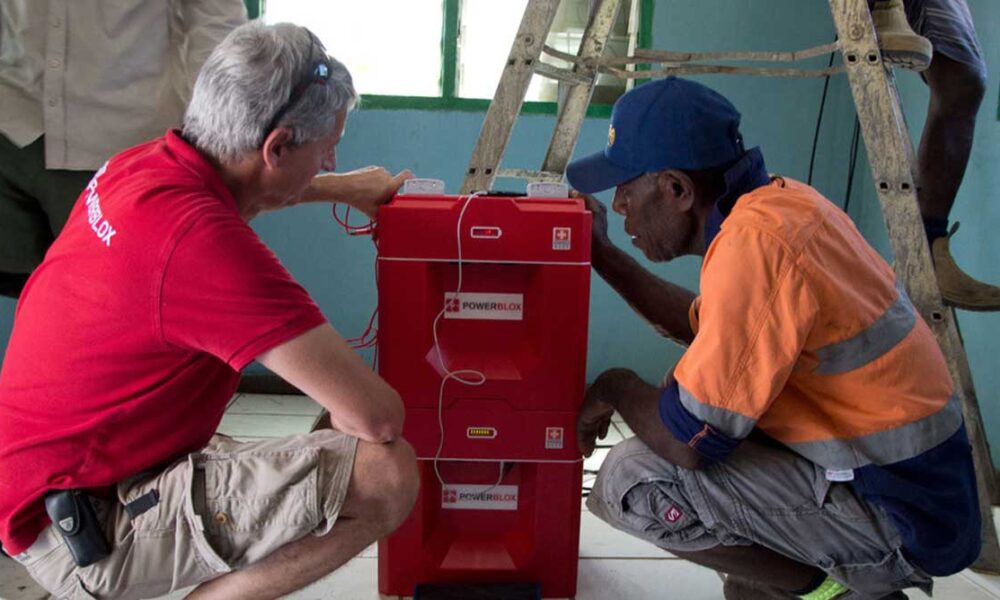 Swarm grids, an innovative technology designed to work with renewable energy sources, are bringing reliable electricity to some of the world’s poorest and remote regions for the first time, providing a major boost to the livelihoods of those who live there.

Around 789 million people worldwide still have no access to electricity, seriously hampering their opportunities for development. But the installation, with the support of the UN development Programme (UNDP), of so-called “swarm grids” in vulnerable communities, from Laos to Mozambique to Vanuatu, is demonstrating that low-cost renewable energy solutions can be an effective alternative to more expensive large-scale grid connections.

The first step to a great future

“This is the first step into a great future”, says Reuben Natamatewia, the Paramount Chief on Lelepa Island, part of the archipelago of 83 islands that make up the nation of Vanuatu, one of the poorest countries in the world.

Mr. Natamatewia is excited by the potential of a swarm grid that has been installed on the island, which, like the vast majority of the nation’s islands, has never been connected to the national grid. Until now, the inhabitants of these islands have had to make do with polluting diesel generators or individual solar home systems, which have a limited capacity, barely providing enough power to charge a mobile phone. The installation promises to be a game-changer for Lelepa.

“Once our village is fully electrified, we will be able to refrigerate our daily fish catch. An electric water pump will provide drinking water to villagers. At the school, teachers and students will be able to use the copy machine and printer. Thanks to sewing machines, women producers will be able to increase their handicrafts production.”

The pioneering swarm grid project, which is supported by UNDP, with financing from Germany, consists of sturdy power cubes, which look like large car batteries, and are charged by a solar array. The power stored in the cubes is fed to individual households, or community buildings such as health centres, via cables buried underground. Because the cubes are inter-connected, power outages are far less likely: if one cube fails, power can be supplied from the other cubes. And, as the energy needs of the community grow, more cubes can be added.

The Lelepa swarm grid is a pilot project, but the Vanuatu government has plans to extend it to many more of the country’s off-grid islands, and transition to 100 per cent renewable energy.

As UNDP technical adviser Alexandra Soezer explains, the swarm grid is a far more cost-effective solution than the options previously available on Vanuatu’s islands. “In Malekula island, UNDP built a traditional minigrid, where each household connection cost around $6,000.00. In contrast, the connection per household on Lelepa island works out at around $1,200”.

“Light is not only light. It is life, and a better life for us here,” says Teung, the chief of Thai Phai Bai village which, along with nearby Ko Bong, is now benefiting from clean energy delivered by a swarm grid installed with UNDP support.

Ko Bong and Thai Phai Bai are too remote to be part of the national grid and, like the inhabitants of Lelepa Island, anticipate that the arrival of cheap, reliable electricity will have a transformative effect on their lives, with benefits including improved health care, education and commercial opportunities.

However, for the UNDP-backed projects to be sustainable, it is essential that members of vulnerable, poor communities can afford to pay for the electricity generated. In Lelepa, where the priority is the electrification of community buildings and infrastructure, a pay-as-you-go model is being put in place for households connections, whilst in Ko Bong and Thai Phai Bai, a community group is managing the swarm grid, and is establishing an electricity fee that is deemed reasonable for the villager

The success of these projects highlights the huge difference that electricity has on some of the world’s poorest people, and the relatively low level of investment needed to make it happen. The potential for bringing electrical power to millions more people is extremely high, says Ms. Soezer.

“According to 2018 figures, there are still 789 million people without access to electricity. By scaling up low-cost swarm grid programmes, we could bring electrification to around 80 per cent of these people, at a cost of around $400 to $500 per connection. Each household could end up paying less than $2.00 per month”.

To be able to scale up, and achieve these results, governments, with support from bodies such as the UN-backed Climate Investment Platform, will still need to secure the necessary loans and grants, but the swarm grids projects show that, given the political will, the ultimate goal of universal access to clean, reliable, and affordable energy, is both technically feasible, and realistic.

One of Georgia Tech's most impactful incoming transfers could be EJ Jenkins. Jenkins is coming over from South Carolina, where he was used as a wide … END_OF_DOCUMENT_TOKEN_TO_BE_REPLACED

In 2021, Las Vegas experienced its most frenzied market in years. Any agent could put a house on the market and it had a considerable chance to sell. … END_OF_DOCUMENT_TOKEN_TO_BE_REPLACED