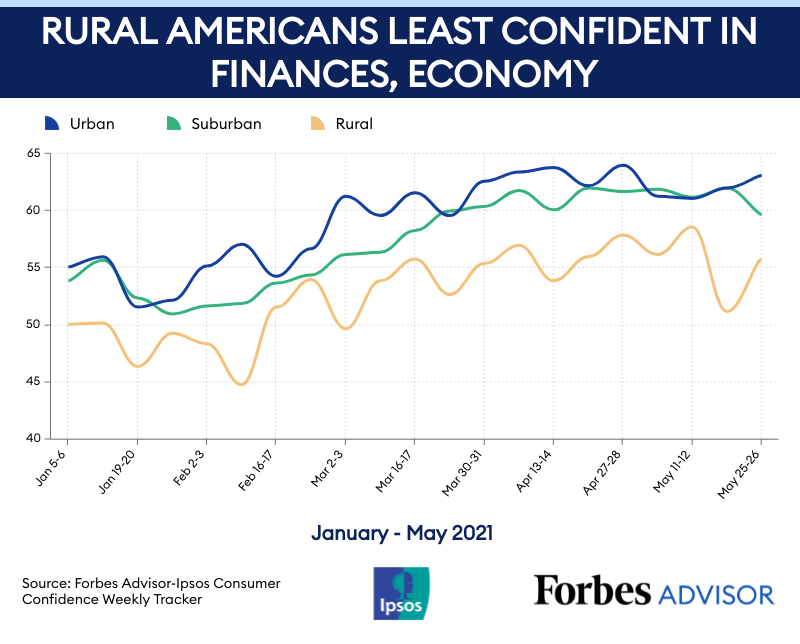 Editorial Note: Forbes Advisor may earn a commission on sales made from partner links on this page, but that doesn’t affect our editors’ opinions or evaluations.

As the country readies for the unofficial kickoff to summer this Memorial Day weekend, it’s clear consumer confidence has come a long way from this point last year.

A strong majority of Americans expect the economy to bounce back quickly as pandemic measures continue to relax, with 64% anticipating a fast recovery, according to the latest Forbes Advisor-Ipsos Consumer Confidence Weekly Tracker.

The survey, conducted by Ipsos, measures consumer sentiment over time.

The majority represents a notable increase from January, when respondents were nearly divided in their optimism.

Now, with 40% of the country fully vaccinated, it’s easier to see what a post-pandemic economy may look like. Many Major League Baseball stadiums will allow full attendance starting in June, and indoor music venues around the country are slated to reopen this summer. And for those ready to travel, even cruises are back on the table.

National consumer confidence sits at 59.8 (out of 100), on par with recent weeks.

But the picture of a reopening isn’t the same for everyone. Confidence in the economy and household finances varies for urban, suburban and rural Americans. This week, Americans living in rural areas had a confidence level of 55.8 (out of 100), while suburban respondents measured at 59.7 and urban respondents at 63.1.

Last week, confidence for rural Americans was 12 points lower than that of their suburban and urban counterparts.

Though rural Americans showed confidence levels that were at times higher than people living in cities in late summer 2020, it didn’t last. Americans in rural areas have shown consistently lower confidence since the start of the year.

Rural areas faced challenges in distributing early doses of the coronavirus vaccines. Pharmacy deserts— where residents must travel long distances to reach the nearest pharmacy—made it difficult for people to schedule their vaccine doses in some areas. The vaccination rate for rural communities lagged throughout early phases of vaccine administration, prior to mid-April when availability became widespread.

In addition, rural areas have a greater rate of vaccine hesitancy. In early May, President Joe Biden announced a new effort to increase the rate of Americans who have had at least one vaccine dose to 70% by the July 4th holiday. Part of that campaign includes outreach efforts and vaccination clinics in rural communities.

And although many states that are predominantly rural have seen unemployment rates recover more quickly than in other parts of the country, these residents may have a harder time finding jobs that fit their skills.

Governors of more than 20 states have announced they will end federal supplements for unemployment compensation months earlier than the programs’ scheduled expiration in September. Those who are able to find employment may face longer commute times than they anticipated. With gas prices rising, those trips could put a strain on their finances even as they’re rebuilding after a tumultuous year.

In rural Perry County, Tennessee, for example, there are only 26 jobs listed online. Half of them require specific certifications, while others are only part time.

Survey methodology: Ipsos, which surveyed 944 respondents online on May 25 and 26, 2021, provided the results exclusively to Forbes Advisor. The survey is conducted weekly to track consumer sentiment over time, using a series of 11 questions to determine whether consumers feel positively or negatively about the current state of the economy and where it looks to be going in the future.

Once you buy a business, the real work starts. It’s not enough to simply maintain the status quo, even if you’re making a profit. A fresh pair of … END_OF_DOCUMENT_TOKEN_TO_BE_REPLACED