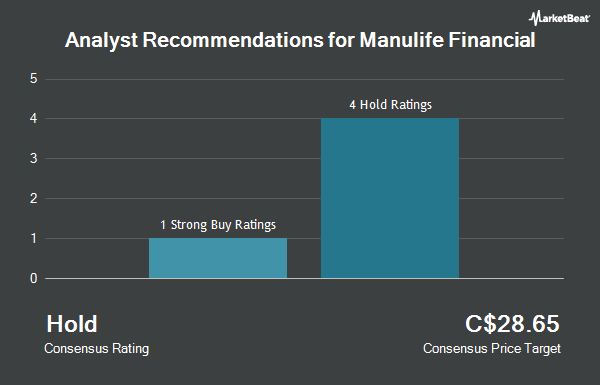 Manulife Financial (TSE:MFC) (NYSE:MFC) had its target price decreased by analysts at Scotiabank from C$29.00 to C$27.00 in a report issued on Friday, BayStreet.CA reports. Scotiabank’s target price would suggest a potential upside of 5.02% from the company’s previous close.

Tech monsters like Apple, Amazon, Microsoft and many more can no longer avoid doing business with this one company that trades for only $3…All of them are held hostage by the CEO’s brilliant business tactics. He intentionally set up his company’s stock under a secret trade name…

Manulife Financial (TSE:MFC) (NYSE:MFC) last issued its earnings results on Wednesday, February 10th. The financial services provider reported C$0.74 earnings per share (EPS) for the quarter, topping the consensus estimate of C$0.69 by C$0.05. The firm had revenue of C$17.87 billion during the quarter. On average, equities analysts forecast that Manulife Financial will post 3.43 EPS for the current fiscal year.

Manulife Financial Corporation, together with its subsidiaries, provides financial products and services in Asia, Canada, the United States, and internationally. The company operates through Wealth and Asset Management Businesses; Insurance and Annuity Products; And Corporate and Other segments. The Wealth and Asset Management Businesses segment provides mutual funds and exchange-traded funds, group retirement and savings products, and institutional asset management services through agents and brokers affiliated with the company, securities brokerage firms, and financial advisors pension plan consultants and banks.

Featured Story: What is meant by holder of record?

This instant news alert was generated by narrative science technology and financial data from MarketBeat in order to provide readers with the fastest and most accurate reporting. This story was reviewed by MarketBeat’s editorial team prior to publication. Please send any questions or comments about this story to [email protected]

Featured Article: Why is the Consumer Price Index (CPI) important?

Like any group of stocks related to travel and tourism, hotel stocks saw a steep drop in share prices in 2020. The leisure and hospitality sector that once had 15 million employees has lost 4 million jobs since February.

Many major cities will be feeling the ripple effects of the Covid-19 pandemic for years. However, there is ample evidence that shows the pandemic may be coming to an end. The number of new cases is dropping. The number of those getting vaccinated is rising. And even in the cities with the most restrictive mitigation measures, the slow process of reopening is beginning.

All of this can’t come fast enough for individuals who rely on the travel and tourism industry for their livelihood. Hotel chains had at least some revenue coming in the door. And when earnings season concludes, the more budget-friendly hotel chains may realize revenue that is 75% of its 2019 numbers. But that is not enough to bring the hotels to anywhere near full employment. Particularly with hotels that have bars and restaurants that have remained closed or open at limited capacity.

Many economists are optimistic that travel may begin to look more normal by the summer of this year. And the global economy may deliver 6.4% GDP growth this year. With that in mind, the hotel chains with the best fundamentals and the broadest footprint will be in the best position as the economy reopens.

View the “7 Hotel Stocks Just Waiting For the Vaccine”.

Washington [US], October 3 (ANI): Some recent reports have claimed that the large camera housing on Apple's iPhone 14 Pro smartphones hinders the … END_OF_DOCUMENT_TOKEN_TO_BE_REPLACED

Hello again everybody and welcome to our live blog with all of the latest financial news coming out of the United States this Sunday, October 2. Our … END_OF_DOCUMENT_TOKEN_TO_BE_REPLACED

October 2022 Listing your home for sale is a marathon, but there are some easy tips and tricks to get ahead of your competition. Some of the easiest … END_OF_DOCUMENT_TOKEN_TO_BE_REPLACED