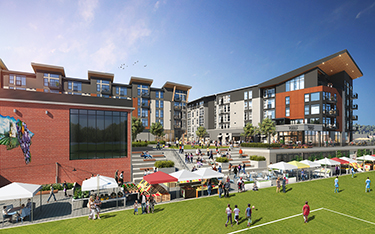 MainStreet Property Group announced that Ethan Stowell’s Ballard Pizza Co. will open a fourth new location at what it’s dubbed the Schoolhouse District. That 3-acre development includes the preserved, over century-old former schoolhouse itself, plus the renovated YMCA building and the new GGLO-designed midrise complex with 266 units and retail. Stowell said in a statement, “We are most excited about getting to know the families and personalities of this fantastic community.” The 3,000-square-foot restaurant will be part of Wine Walk Row; it’s expected to open in the second half of this year. Other signed commercial tenants now include Walla Walla Steak Co. and Crossbuck Brewing. MainStreet’s sister company GenCap Construction built the project, and HAL Real Estate was a financial partner. The apartments, dubbed Class and Chalk, are set to open this fall.

CNBC's Jim Cramer on Wednesday told investors that they should take gloomy economic commentary from bank executives with a grain of salt. "Don't panic … END_OF_DOCUMENT_TOKEN_TO_BE_REPLACED