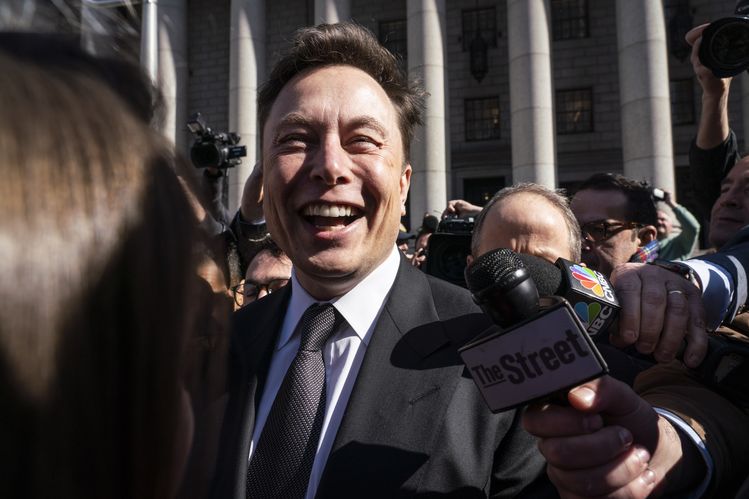 Securities regulators told Tesla last year that chief executive Elon Musk’s use of Twitter had twice violated a court-ordered policy requiring his tweets to be pre-approved by company lawyers, according to records obtained by The Wall Street Journal.

Tesla and the Securities and Exchange Commission settled an enforcement action in 2018 alleging that Musk had committed fraud by tweeting about a potential buyout of his company. Musk paid $20m to settle that case — Tesla also paid $20m — and agreed to have his public statements on social media overseen by Tesla lawyers.

In correspondence sent to Tesla in 2019 and 2020, the SEC said tweets Musk wrote about Tesla’s solar roof production volumes and its stock price hadn’t undergone the required pre-approval by Tesla’s lawyers. The communications, which haven’t been previously reported, spotlight the running tension between the nation’s top corporate regulator and Musk, who publicly mocked the SEC even after settling fraud claims with the agency.

The SEC told Tesla in May 2020 that the company had failed “to enforce these procedures and controls despite repeated violations by Mr Musk”. The letter, signed by Steven Buchholz, a senior SEC official in its San Francisco office, added: “Tesla has abdicated the duties required of it by the court’s order.”

Tesla, Musk, and the SEC didn’t respond to requests for comment. The Journal obtained the records under a federal Freedom of Information Act request.

Musk’s skirmish with the SEC is part of a pattern by him and Tesla of sidestepping rules or averting enforcement attempts, The Journal reported in April. Tesla has also clashed with the National Transportation Safety Board and state Occupational Safety and Health Administration officials in Nevada. Another company run by Musk, SpaceX, has also had a sometimes contentious relationship with the Federal Aviation Administration.

The pre-approval requirement was an unusual condition of the SEC enforcement action that the regulators touted as a way to improve Tesla’s corporate governance in the wake of the 2018 investigation. The deal also called for Musk to relinquish his chairman’s role and for Tesla to appoint two independent directors. Musk and Tesla resolved the SEC investigation without admitting or denying wrongdoing.

READ The power of Muskonomics – Credible investment strategy, or cult of personality?

From the start, the social media policy was difficult for the SEC to enforce. The SEC accused Musk of violating the rules in February 2019 and asked a Manhattan federal court to consider holding him in contempt. The judge signalled she wanted the two sides to settle the dispute and they agreed to modify the policy by clarifying which topics required pre-approval. Those were identified as including communications about production figures, new business lines and the company’s financial condition.

Within months, the SEC was writing to Tesla again, questioning a tweet Musk wrote on 29 July 2019, that stated: “Spooling up production line rapidly. Hoping to manufacture ~1000 solar roofs/week by end of this year.”

That tweet fell under a requirement to vet any public messages that addressed “production numbers or sales or delivery numbers”, the SEC wrote in an August 2019 letter to Tesla. Tesla told the agency that Musk hadn’t submitted the tweet for review and that a committee had later determined it didn’t require authorisation because it was “wholly aspirational”, according to the SEC’s account of its correspondence with the company.

Less than a year later, on 1 May 2020, Tesla’s shares fell after Musk tweeted, “Tesla’s stock price is too high imo”. That again prompted a letter from Buchholz.

Tesla told the agency its lawyers hadn’t reviewed that tweet, which the company described as “personal opinion” that didn’t require authorisation, according to the SEC’s correspondence. When the SEC sought records related to the tweet, Tesla said there were none, the agency wrote in an 8 May 2020, letter to Tesla. Musk’s tweet addressed the company’s financial condition, a topic subject to the policy, the SEC wrote.

“In the face of Mr Musk’s repeated refusals to submit his covered written communications on Twitter to Tesla for pre-approval, we are very concerned by Tesla’s repeated determinations that there have been no policy violations because of purported carve-outs,” the SEC wrote in that letter.

Tesla’s outside counsel responded later that month that tweeting about Tesla’s share price wasn’t covered by the agreement, according to a copy of a letter separately obtained by the Journal. The lawyers said regulators had tried to “harass Tesla and silence Mr Musk” with investigations that “overlapped endlessly”.

“The serial nature of these investigations leaves us gravely concerned that the SEC is targeting Mr Musk for an improper purpose,” attorney Alex Spiro wrote.

Musk, who has at times been sharply critical of regulators, lashed out at the agency soon after, tweeting in July, “SEC, three letter acronym, middle word is Elon’s.”

The SEC said in a June 2020 letter to Tesla’s lawyers that it hoped to resolve the disagreements without going to court. The regulator wrote that Tesla and its lawyers “declined to engage in a substantive dialogue regarding the May 1 tweet”.

The feud appears to have ended in a stalemate without further consequence to Tesla or Musk, the correspondence suggests. Tesla’s lawyers argued against the SEC’s claims about the tweets, and the SEC never went back to court to ask a judge to intervene.

The SEC ended a June 2020 letter with a request: “We urge the company to reconsider its positions in this matter by acting to implement and enforce disclosure controls and procedures…to prevent further shareholder harm.”

The disputes over Musk’s tweets don’t mean the policy was wrongheaded, said Jill Fisch, a University of Pennsylvania law professor. Corporations and CEOs are still working through how to use social media, she said, and oversight from regulators can help improve things. Leaders such as Musk, who exerts a strong pull over markets, deserve special attention, she said.

“It’s hard to draft a court order that allows for some communication but also potentially constrains or monitors it,” Fisch said. “The first time out, it’s going to be an imperfect tool.”

This article was published by The Wall Street Journal.

The University of Plymouth, the AHSN Network and Boehringer Ingelheim, has launched evidence-based recommendations to drive inclusive digital health … END_OF_DOCUMENT_TOKEN_TO_BE_REPLACED

This year’s Rising Stars of Private Equity has been published at a time of great uncertainty for the sector, as the young professionals on our list … END_OF_DOCUMENT_TOKEN_TO_BE_REPLACED

If you know of local business openings or closings, please notify us here.PREVIOUS OPENINGS AND CLOSINGS· Air Products and Chemicals Inc.'s chosen … END_OF_DOCUMENT_TOKEN_TO_BE_REPLACED