Sky is “surprised and happy” at Sky Glass sales ahead of Christmas, the company product chief has told Sky News, but he stressed it was easier to understand the product more as an entertainment platform than a telly.

When the hardware was launched in October it was hailed as Sky’s solution to clutter, both physically of electronics and also digitally of streaming service content scattered across multiple apps.

But as a platform rather than a device the company is continuing to roll-out software upgrades to improve image quality and introduce new features. And it is the technology powering the Sky Glass which Sky’s parent company Comcast sees as providing the most value, as chief executive Brian Roberts told Ian King Live.

Sky Glass requires a broadband connection (from any provider, not necessarily Sky) and does away with the need for a satellite dish and the hardware normally spread out across living rooms for a home entertainment system, including set-top boxes and sound bars.

This integration – it needs just a single plug socket – is also key to what the company’s technology displays on screen, aggregating and suggesting content from multiple streaming services so customers don’t have to go searching for it

“How we really think about Sky Glass – and why it is genuinely different, globally a different thing, there’s no other product like it right now – is because we look at it as a massive catalogue,” explained Fraser Stirling, group chief product officer at Sky.

“There’s a catalogue that sits there and has information on live [programming], on-demand, things that you can record, stuff that’s in-app, stuff that’s in other apps, and it’s all there in a massive catalogue,” he said.

Image:
Sky Glass has a voice search feature in the television set and in the remote control itself

“If I search for Bruce Willis movies, which I do all the time, especially this time of year, you will see all the Bruce Willis movies, but that’s from everywhere, from Amazon, from Cinema, from Netflix, from Disney, all of them, in one place. And that is because it’s in the catalogue.”

Mr Stirling added: “It’s not just about TV and movies. Sky Glass is an entertainment platform. It’s got fitness and music, and we’ve got games in there as well, and that’ll expand more and more over time.”

Users need their own subscriptions to the streaming services that aren’t covered in their Sky plan, but the Glass catalogue includes iPlayer, Amazon, Netflix, Disney+, ITVHub, All4, Spotify, YouTube, Apple TV+ and Peloton.

To avoid customers having to manually search through all of these sites, the home screen offers a voice search feature – either enabled on the television itself to respond to voice commands, or accessible through the remote control. Image:
The Sky Glass pulls up a scrollable page of Bruce Willis films in response to a voice command

Mr Stirling recalled his father telling him he was using Google Search to find out which service a particular show was on.

“That is what customers are having to do,” he said. “They’re having to solve their own problem by going into each app individually, or they’re going to have to use some other thing to find where the content was. That’s crazy.

“The playlist feature has been designed to stop that. So it’s just easy for customers.”

The playlist effectively allows customers to bookmark their favourite shows and films, keeping them available for re-watching in what Mr Stirling said was most circumstances. 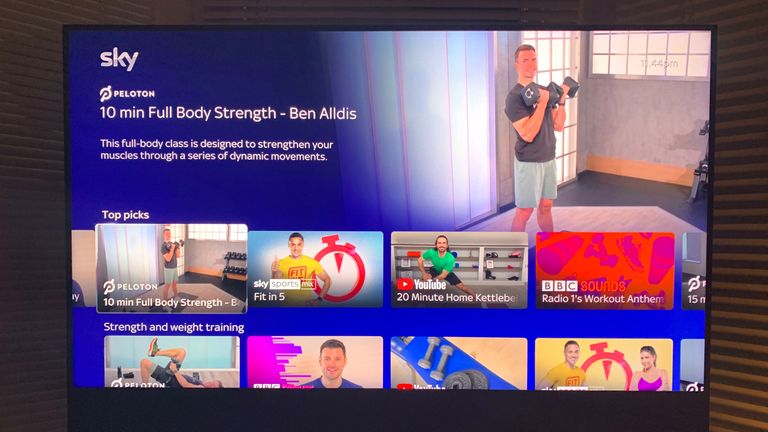 Image:
A range of fitness videos are available alongside television and movies

How have reviewers and customers responded?

Reviewers have generally given the Sky Glass between three and four stars out of five.

Techradar and The Independent praised the visuals and sounds, although both regretted Sky Glass didn’t include all of the features of Sky Q, including the ability to record programs – valuable in case they are removed from the streaming sites.

The Guardian said “the screen rivals lower mid-range TVs costing about £500,” while Wired magazine’s review – which was particularly critical of the Sky Glass as a television – complained about uneven backlighting.

Sky has since made several software updates addressing visual issues.

Among the other complaints has been that the device doesn’t support wireless headphones, with a handful of Sky help forum posts offering potential workarounds for people hard of hearing.

Sky News was told that adding support for bluetooth headphones was something the company is exploring.

Opinion by Alexander Martin: So what’s it like for cord-cutters?

I suppose it’s time to come clean… our family hasn’t owned a television for several years. We see them when we visit friends and grandparents, but at home we’ve been using our laptop and phone screens to watch films and TV, almost always from on-demand services, and almost always separately except for the government’s COVID-19 news briefings when we huddle nervously together.

This hasn’t been due to any interpersonal issues but because it’s a challenge to sit and watch a laptop or a smartphone in a group for the length of a television show. And yet I suspect that laptops and smartphones are the default screens for many people when the content is being played from an app like Disney+ or Netflix.

We’ve had Sky Glass in our living room for over a month now and it has forced these experiences to be much more of a social occasion for the whole family, something which I think we had missed. And we’ve been able to watch a lot together, from Succession through to The Lion King.

The Academy Award-nominated director Denis Villeneuve told Variety magazine about his belief in cinema on a big screen as being “one of the very last artistic, in-person collective experiences we share as human beings”.

Short of the romance of a comfortable theatre – and in an era when being close to strangers isn’t especially safe – the Sky Glass has definitely offered that kind of experience and with a much broader range of programming than anything other than our pandemic neurosis had previously brought us together for.

I don’t doubt that those with higher standards and deeper pockets will find it doesn’t meet the very best in the market for image quality or sound – that is certainly the word from reviewers – but compared to our quite good laptops, the 4K Quantum Dot display and the Dolby Atmos sound system have been excellent.

Sky is the parent company of Sky News. Sky News operates under an independent editorial policy as part of undertakings detailed in our Editorial Guidelines. These are publicly available here.

Arkansas Tech University students, their families, volunteers from the ATU move-in crew and ATU faculty and staff were among those who worked together … END_OF_DOCUMENT_TOKEN_TO_BE_REPLACED

Jain Anshu, President of Cantor Fitzgerald appears on CNBC's Squawk on the Street at the 2020 World Economic Forum in Davos, Switzerland on Jan. 22nd. … END_OF_DOCUMENT_TOKEN_TO_BE_REPLACED

With more than $750 million in building projects to complete, the Cherokee Nation has embarked on a monthslong hiring spree.A labor recruitment effort … END_OF_DOCUMENT_TOKEN_TO_BE_REPLACED