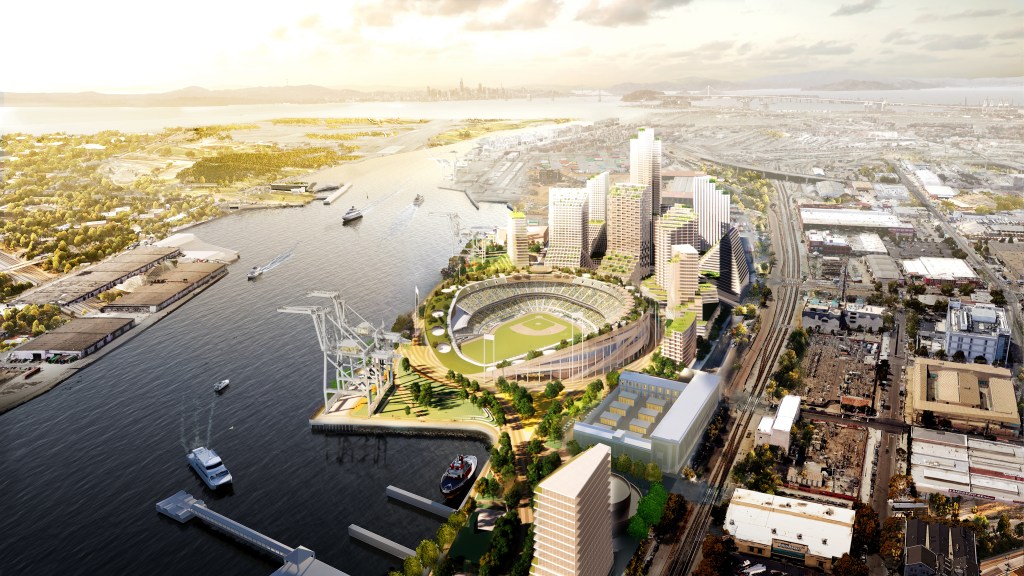 Major League Baseball wants to shake down the city of Oakland.

It’s as gross as it is predictable.

On Tuesday, Major League Baseball announced that the A’s have permission to seek relocation from Oakland.

Their release was tone-deaf, misleading and altogether embarrassing for the A’s.

But little changes with this threat from the team and their New York City lawyer, MLB commissioner Rob Manfred. The team is no more likely to move today than it was Monday.

The only difference between now and then is that the A’s have finally said the quiet part out loud. The omnipresent threat of relocation that has existed for decades is now officially on the record, via MLB:

It’s a strong threat, one that has worked countless times in North American professional sports. But the city of Oakland’s leaders should call the A’s bluff.

I don’t blame the A’s for playing their best card, but using it now shows exactly how overmatched A’s owner John Fisher and team president Dave Kaval are in this ballpark process.

You see, the A’s want a lot of things from the city of Oakland, but right now they want a city council vote on their team’s $12 billion Howard Terminal Stadium proposal, which asks for at least $855 million from the city’s taxpayers.

Yes, we’re amid the ultimate battle of a broke city and a billionaire team owner who wants a big handout.

And apparently the A’s — after having years to come up with a viable plan to build a new ballpark — couldn’t wait more than a few weeks to hear back from the city on this latest proposal. A proposal that came in with a budget so much larger than expected that the strongest political backer of the waterfront ballpark plan, Oakland Mayor Libby Schaaf, had to immediately rebuke it in a press release.

After that release, things became quiet on the ballpark front. The A’s got antsy. The relocation threat was their response. Not exactly proportional, was it?

If you want to unclog a pipe, you apply pressure.

It’s telling that the A’s can only apply public pressure right now.

But as we learned during the Laney College ballpark fiasco, Kaval — who has been fully empowered by the recluse Fisher to handle the ballpark situation — isn’t a good politician.

Three weeks. That’s all the A’s had to wait since they submitted their bigger-than-expected proposal on April 23. Three weeks. Even if you ignore the fact that the city budget was being decided during that time, that’s nothing. When you do consider it, what the A’s did Tuesday was laughable.

Instead of applying slow, steady pressure — instead of greasing the pipe (and, for Fisher, perhaps a few palms) to bring about a vote on their proposal this summer, the A’s decided to make a show Tuesday. Their vague, half-hearted threat of relocation is brutish. It’s a big splash that left them drenched in the process.

There are simply too many stakeholders in this process — too many opponents of the ballpark — for the A’s to be this heavy-handed. They might think it’s a power play, but it’s a show of weakness. The savvy political operators in the bunch — and it sure seems like the ballpark opposition has a lot of them in their corner — will pounce.

And when that happens, Major League Baseball won’t be able to help the A’s. They did their part on Tuesday.

No, at that point, the A’s will have to turn to the leaders of the city to fight those powerful forces.

How’s that going to go?

That scenario, of course, depends on the team currently having the votes to progress to such a litigious stage.

I’m not sure if the A’s will get a vote anytime soon — the city isn’t obliged to do a thing — but as any Brit (or husband of one) can tell you: don’t call a snap election if there’s a margin for error.

Yes, if the A’s want to rush, they might not like the end result. No one likes being rushed.

And don’t forget that Schaaf presided over the Warriors and Raiders’ exits and still won re-election by a wide margin this past November.

Of course, if the A’s lost this council vote, then the team would certainly have to look at relocation. The subtext of Tuesday’s announcement was that the A’s don’t believe the Coliseum site is a viable option for a new stadium. They’re wrong, and the fact that the A’s own half the Coliseum site says as much, but East Oakland likely won’t make as much money for Fisher as free waterfront real estate will, so the A’s say they’ll leave Oakland if Howard Terminal fails.

So much for being “rooted”. Yes, the Kelly Green will only stick around so long as the greenbacks from the city come Fisher’s way.

Meanwhile, we heard the usual names Tuesday: Las Vegas, Portland, Nashville, Charlotte. But I’m wondering if Oakland says no, will there still be a sucker of a city that would want to be Fisher’s sugar daddy in a post-pandemic world? Corporate welfare is a tougher sell these days.

And is Major League Baseball really interested in leaving the 4 million Nielsen homes in Northern California (Bay Area plus Sacramento) — even if there is another team in it — for a place like Vegas, which is a fifth of the size? I doubt it.

And should we warn any of those cities that Fisher won’t use the team’s profits on players?

No, I say if it ever comes to that — and I think we’re a long ways away from such a push-come-to-shove moment — we let them find out on their own.

Washington [US], January 26 (ANI): Google's much-awaited smartwatch may finally release in May 2022.As per GSM Arena, the information regarding the … END_OF_DOCUMENT_TOKEN_TO_BE_REPLACED

Bitcoin and other cryptocurrencies were rising on 26 January, bouncing back after a deep selloff that began late last week. There is optimism that the … END_OF_DOCUMENT_TOKEN_TO_BE_REPLACED

EAST HANOVER, NJ — Sandwich cookie pieces are the key ingredient in one of the most popular ice cream flavors. Now, Mondelez International, Inc., the … END_OF_DOCUMENT_TOKEN_TO_BE_REPLACED