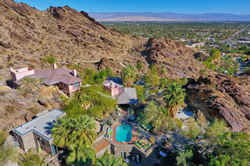 In May, Suzanne Somers sold her Palm Springs home for $8.5 million.

Where Real Estate Is Never Boring!

Tom Cruise listed his 320-acre ski home in Telluride, Colorado for $39.5 million in March. It has already sold and at the full asking price. In 1994, Cruise helped design the 10,000-square-foot, stone-and-cedar home with four bedrooms, a gym, recreation room, library and a guest house with an additional three bedrooms.

Derek Jeter has sold his Tampa Bay mansion that Tom Brady has been renting since joining the Tampa Bay Buccaners. Derek sold the 22,000-square-foot mansion for about $22.5 million, which is a record price for Tampa-area real estate.

Joan Rivers’ lavish New York penthouse – the home she described as “What Marie Antoinette would have done, if she had money” and once hired a voodoo priestess to remove a ghost – is for sale. After Joan’s death in 2014, the apartment was purchased by Middle Eastern royalty for $28 million. It is now back on the market at $38 million.

“Rihanna Does It Twice In Beverly Hills”

Rihanna recently bought side-by-side homes in Beverly Hills. She purchased a contemporary home a few months ago for $13.8 million and more recently a traditional Tudor for $10 million. Between the two homes, she has more than 11,000 square feet of living space, two pools and an abundance of parking.

After 60 years in the Hilton family, W. Barron Hilton’s 15,000-square-foot home in L.A.’s Bel Air neighborhood has sold for $61.5 million. The home was originally built in 1935 for Jay Paley whose family founded CBS. W. Barron, who died in 2019, was the son of Conrad Hilton and grandfather of Paris Hilton.

Katy Perry has sold one of her L. A. homes for almost $7.5 million. Located in Beverly Hills near her main living home, she used the four-bedroom home primarily for guests.

Phil Spector’s infamous home has sold for $3.3 million. The home was built in the 1920s in L.A.’s Alhambra neighborhood to look like a French aristocratic castle-home with over 8,600 square feet and views of the San Gabriel Valley. In 2009, Spector was convicted of murdering actress Lana Clarkson in 2003 at his home. He died in a California prison in January, 2021.

Suzanne Somers and husband, Alan Hamel, created the ultimate love nest in their wonderfully quirky and glamorous abode in Palm Springs, California. Back on the market after several tries and a long hiatus, Suzanne Somers’ home was most recently listed at $8.5 million. The home has now sold – sale price not yet disclosed.

Bette Midler got some wind under her wings when she finally sold her 14-room Upper East Side penthouse. She originally listed her longtime New York home in 2019 at $50 million.

Jeff “Dude” Bridges and wife, Susan, recently sold their Tuscan-style family estate in Montecito, California to Oprah Winfrey for $6.85 million. Purchased in 1994 from rocker Kenny Loggins, who designed much of the home, the almost 20-acre hilltop property consists of the main house with a bit over 3,500 square feet, a caretaker’s cottage, a pool house and guest house. Oprah owns several homes in the Montecito area.

As fans anxiously awaited the release of the season finale of the Netflix thriller “Stranger Things,” the network went down for a brief period on … END_OF_DOCUMENT_TOKEN_TO_BE_REPLACED

If you know of local business openings or closings, please notify us here.PREVIOUS OPENINGS AND CLOSINGS· Air Products and Chemicals Inc.'s chosen … END_OF_DOCUMENT_TOKEN_TO_BE_REPLACED